In Turkey, one alleged crime always leads to a larger conspiracy theory, demonizing and punishing a large group of people. 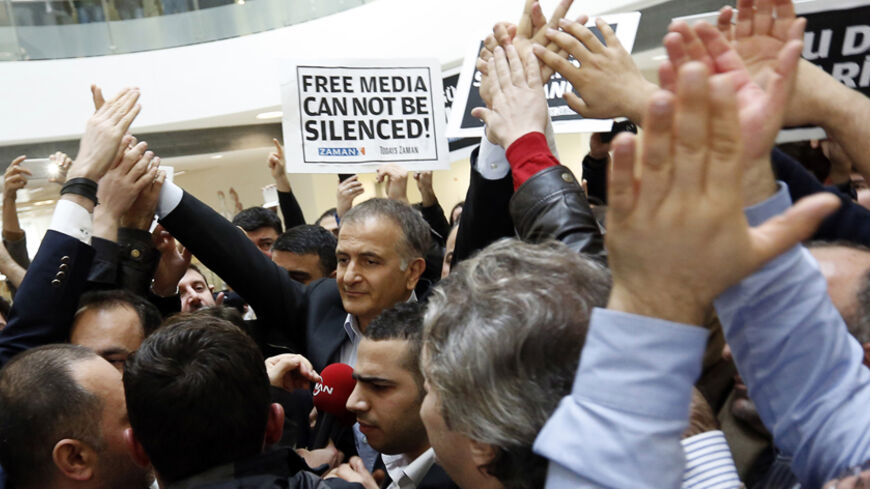 Zaman editor-in-chief Ekrem Dumanli (C), escorted by plainclothes police officers, is cheered by his colleagues as he leaves the headquarters of Zaman daily newspaper in Istanbul, Dec. 14, 2014. - REUTERS/Murad Sezer

On Dec. 14, Turkey woke up to breaking news: Turkish police detained 25 people, including top media figures and police officers, simultaneously raiding addresses in 13 cities across the country. The detainees included Ekrem Dumanli, the editor-in-chief of Zaman, Turkey’s top-selling newspaper, and Hidayet Karaca, the director of STV, a news channel. What they all had in common was their affiliation with the Fethullah Gulen movement — an Islamic community that once was the best ally of President Recep Tayyip Erdogan, but which turned into his worst enemy after the corruption investigations of December 2013.

What made these arrests even more controversial was that they were foretold by the mysterious “Fuat Avni,” a faceless Twitter account that claims to be a hidden deep throat within the top echelons of the Erdogan government. With some 629,000 followers (@fuatavnifuat), this account wrote on Dec. 11, or three days before the arrests, that “the Tyrant” (i.e., Erdogan) has ordered a new crackdown on opposition media and some 150 journalists would be arrested soon. Since then, supportive crowds have been flocking to the building of the daily Zaman, which “Fuat Avni” identified as the main target of the upcoming raid. On Sunday, the warnings turned true, when the police indeed came to Zaman to detain Ekrem Dumanli, in the midst of a large crowd cheering for press freedom.

Yet, at least so far, the “crackdown on opposition media” has been less widespread than what Fuat Avni had predicted. As the press reported, the detainee list includes some 31 names, at the top of which is Fethullah Gulen himself. (But his arrest was impossible, since he has lived in Pennsylvania, in the United States since 1999.) Others are either certain policemen alleged to be members of the movement, or certain journalists and film producers. And they are all blamed of leading or taking part in an “operation” against an Islamist group called “Tahsiyeciler,” which the Gulen movement allegedly sees as a threat or rival to itself.

The “Tahsiyeciler,” or, literally, “those who make footnotes,” are a small Turkish Islamist community that claims to follow the teachings of Islamic scholar Said Nursi (1878-1960). “Yet they are more radical in ideology than most Nursi followers,” an expert on this tradition told me, “in that they denounce democracy and advocate an Islamist state.” Yet, the same expert added that the group has never been violent. However, both the leader of the group, Mehmet Dogan, and 10 of his followers were arrested in 2010 in a widespread detention of alleged al-Qaeda members all across Turkey, which was then reported in the international media, including The New York Times.

Dogan spent some 17 months in prison, but was later released due to a controversy about the evidence: On the hand grenades that were allegedly found in his home, fingerprints were found that belonged to the very police who raided the place. The police explained this as a result of not wearing gloves, but the suspects insisted that it was the police themselves who put the hand grenades there, just to be able to label the suspects as terrorists.

In August, some members of the Tahsiyeciler, who believed that they were victims of a conspiracy, went to a prosecutor to complain about the “parallel structure” — or the alleged Gulen movement network and the judiciary, about which Erdogan has been calling for complaints. The prosecutor who ordered the Dec. 14 arrests based his accusations on this complaint. The detained policemen are blamed for conspiring against Tahsiyeciler by putting weapons in their homes just to “find” them.

But what about the journalists? That is where things get tricky. The journalists are accused by the prosecutor of arranging the “propaganda side” of the scheme against Tahsiyeciler. Some of them are even accused of writing the script for a TV series on STV, titled “Tek Türkiye” ("One Turkey"), in which the Tahsiyeciler group is depicted as a terror group controlled by an evil cabal that tries to destabilize Turkey. The prosecutor argues that Gulen followers within the media and security forces worked hand in hand, in a hierarchy, to cook up a conspiracy.

Notably, this was the very logic used by both the pro-Gulen media and the Justice and Development Party (AKP) government when they were allies (2007-11), to defend the imprisonment of many secularist journalists accused of acting on the orders of a would-be junta in the military. That is why many are correct today in reminding the spokesmen of the Gulen movement that what they protest today is exactly what they did just a few years ago: to jump from one alleged crime to a larger conspiracy theory, to demonize and punish a large group of people, whose only “crime” may be just to share an ideology or community.

The crucial question is whether the temporarily detained journalists will be ordered arrested by judges for a trial in custody, which could put them in jail for a long time. That is what happened during the “coup cases” of 2007-11, when dozens of journalists were imprisoned for months and even years. In that case, Turkey would be just repeating the same nightmare, only with different actors in different positions. Some pro-Gulen journalists who were once cheering for the arrest of “coup collaborators” would find themselves as the new “coup collaborators” in jail.

Meanwhile, the AKP government and Erdogan seem to recognize that what they are doing is a witch hunt — but a necessary one. (In fact, Erdogan openly declared in June that he would not shy from a “witch hunt” against the Gulen movement.) But they give the assurance that this is “the final battle” before a truly wonderful democracy — or, say, the witch hunt to end all witch hunts. Many others fear, however, that this might just be the beginning of a darker, more authoritarian era, where the hunt for “the traitors” to the nation may never end.