Were the "Annotators" really terrorists connected to al-Qaeda? Or were they victims of a conspiracy by the “parallel state”? WikiLeaks offers some hints. 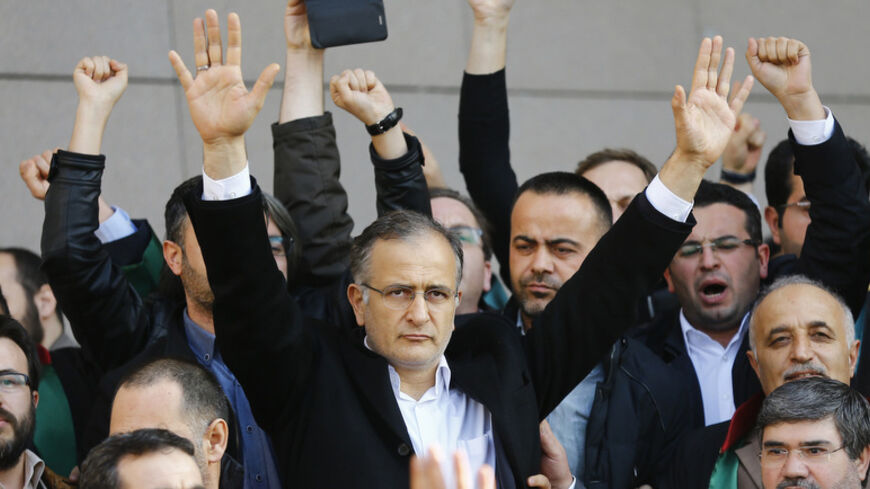 Zaman Editor-in-Chief Ekrem Dumanli greets his supporters after being released by the court outside the Justice Palace in Istanbul, Dec. 19, 2014. - REUTERS/Murad Sezer

It has become almost a Turkish tradition now to have a new criminal case every season in which the nation gets bitterly divided. The latest example is the case of “Tahsiyeciler,” or “Annotators,” which is a small Islamist community based in eastern Turkey. More than 120 members of this group were detained in January 2010 for alleged al-Qaeda ties, and 11 of them spent months in prison. But now the government, and a like-minded prosecutor, argues that this was in fact a scheme cooked up by the “parallel state” of the Gulen movement to crack down on an innocent rival group.

The detention of several Turkish journalists on Dec. 14, which attracted global media attention, was a result of this accusation, for all the journalists were linked with the Gulen movement and were blamed for “propaganda” against the Annotators. Moreover, the prosecutor who launched the investigation soon also added Fethullah Gulen himself to the arrest list, which is likely to create tension between Turkey and the United States. Gulen has been living in rural Pennsylvania since 1999.

That is why it is crucial for Turkish politics right now to figure out whether the Annotators were really “terrorists” with al-Qaeda ties, or whether this was a libel. That is also why the views of third parties, which may be less partisan, matter.

That brings us to WikiLeaks, a rich source which, to the dismay of the US government, has allowed us mortals to get an inside view of the American diplomatic establishment. Thanks to WikiLeaks, in a “secret” wire sent to Washington from Ankara on Jan. 27, 2010, titled “Detained Islamists Not A Threat To US Interests,” we read:

“Both the TNP [Turkish national police] and sensationalist Turkish press referred to the detained and arrested individuals as al-Qaeda members. Our assessment, based on liaison with the TNP and other Turkish security agencies, is that the suspects are not actually believed to have ties to al-Qaeda; rather, ‘al-Qaeda’ is being used by the media and police as a catchall term for suspected Islamic extremists regardless of organizational affiliation, or whether they have an organizational affiliation.”

This view is line with many objective experts in Turkey, who accept that the Annotators have extremist views, but no history of violence and no organizational affiliation with al-Qaeda or any other known terrorist faction. The leader of the group, Mehmet Dogan, who spent 17 months in prison after his arrest in January 2010, did not shy away from expressing those extremist views on a recent TV show on CNN Turk. “I love Osama bin Laden for his faith as a Muslim,” he said on camera from his home in eastern Turkey, “but do not know about his organization.” He also added that he is not interested in politics and does not even follow the news.

But if the Annotators were merely a bunch of eccentrics with strange views, why did Turkish police launch a nationwide raid against them? Here, too, the WikiLeaks wire offers an explanation:

“The detentions and arrests appear to us to have been pre-emptive. The TNP's goals may have been to disrupt nascent Islamist cells and show their members that their activities are subject to monitoring. We understand charges against many of the detainees may be difficult to substantiate.”

The key word here, I believe, is “pre-emptive.” It may also help us understand the connection, if there is any, between the police operation against the Annotators, and the previous reference to the Annotators in a sermon by Gulen and a TV drama on a pro-Gulen channel that the prosecutor now treats as evidence. In both the sermon and the drama, there were warnings that the Annotators could be used by dark conspiratorial powers to depict Turkey’s innocent Muslims as terrorists and trigger a secularist backlash. If this conspiratorial reading of events inspired the police in question, a “pre-emptive” operation by them on the Annotators would be only the call of duty.

However, there is a burning question here: Did the urge to pre-empt a conspiracy through the Annotators turn into a conspiracy against the Annotators? The latter is now what the prosecutor claims, arguing that the weapons found in an Istanbul home in January 2010 were actually planted there by the police that allegedly acted on behalf of the Gulen movement. The pro-government media is also pushing for the theory, arguing that this is just one episode in a long chain of plots by the “parallel state.”

For an informed and objective view, I spoke to Ismail Saymaz, senior reporter for the liberal-left daily Radikal, who knows the charges and the related history in detail. He concurred that while the Annotators sound sympathetic to jihadists, it is very unlikely that they would engage in an armed struggle and collect an arsenal. The weapons found in a home in 2010 — grenades, bullets and a smoke bomb — could therefore either belong to one eccentric member of the group, or indeed may have been planted there by the police to “fabricate evidence.” There are similar suspicions in other cases of the same era, he added. Yet, he was also surprised that the arrests of last week included not the policemen who are accused of fabricating evidence, but Hidayet Karaca, the director of STV, a pro-Gulen TV channel.

In short, Turkey needs to figure out what really happened to the Annotators in 2010. Of course, that can only be established by a fair trial in an independent and nonpartisan court. Yet, that is precisely where the problem is. Besides the government and its supporters, many in Turkey believe that the current mood of a witch hunt against the Gulen movement is aimed at revenge and the rewriting of history for political needs, rather than establishing justice and the uncovering of the whole truth — in the same Machiavellian way that the “parallel state” is widely believed to have acted against its enemies in the recent past.

That is why, at least to have a more informed opinion on the matter, the views by third parties may help. That is why, perhaps, the US diplomats who wrote the wire from Ankara to Washington on Jan. 27, 2010, can help us by telling more about how they evaluated the thorny events of that controversial era.