The latest corruption scandal will be no picnic to cover. 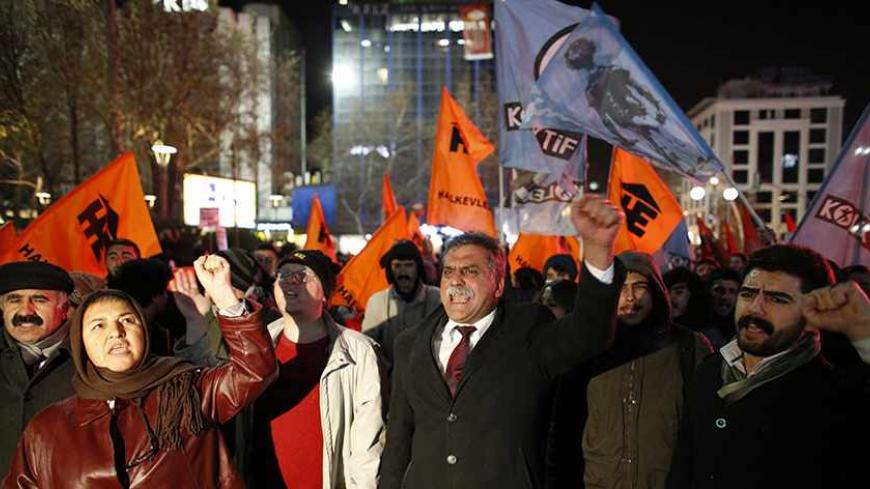 It's every investigative reporter's dream come true: A corruption scandal involving the sons of key cabinet ministers, the gold-smuggling Iranian husband of a Turkish pop diva and cowboy contractors bribing and bulldozing their way to incalculable wealth. But don’t expect much honest reporting on what is poised to be the greatest challenge yet to Turkish Prime Minister Recep Tayyip Erdogan after a decade of uninterrupted rule. You may not get it. This is because honest reporting in Turkey, as I myself found out after being fired by a pro-government daily newspaper in April, can leave you without a job. Worse, it can land you in jail. As the Committee to Protect Journalists (CPJ) put it in a new report, with 40 journalists behind bars, Turkey in 2013 is the “world’s top press jailer once more,” a title that neither China nor Iran have been able to wrest away.

The media has never been free in Turkey. When the generals ran the show, covering radioactive subjects such as their brutal oppression of the Kurds was a risky enterprise. Dozens of Kurdish journalists who ignored the risks were murdered by unknown assailants, their newspaper headquarters firebombed.

Media bosses with other business interests readily kowtowed to the brass hats.

Journalists no longer get bumped off and the generals have been defanged. Yet, little else has changed. I found out, for instance, last year thanks to a leaked government document that I and several other colleagues, including fellow Al-Monitor contributor Yasemin Congar, had been illegally wiretapped for more than a year starting in 2008 (and probably still are) by Turkey’s national spy agency MIT on the outlandish claim that we were somehow connected to “Kurdish terrorists.” To add insult to injury, MIT assigned us fictitious names — mine was “Demi,” yes, I repeat, “Demi” — to secure prosecutors’ approval to spy on us. It is widely assumed that most prominent journalists’ phones are tapped and that they may even be secretly filmed. A common joke among my female colleagues is that they hope the videotapes “don’t show our cellulite." I might have laughed the MIT affair off if it were not for the fact that most of my colleagues in prison are Kurds accused of being connected to “terrorists,” and that as part of my job I have interviewed rebels of the Kurdistan Workers Party (PKK), which is an officially designated terrorist group. In the words of the CPJ, “Authorities are holding dozens of Kurdish journalists on terror-related charges and others for allegedly participating in anti-government plots. Broadly worded anti-terror and penal code statutes allow Turkish authorities to conflate the coverage of banned groups with membership.”

Colleagues who decided to press legal charges against MIT have hit a wall. Erdogan, who has ultimate authority over the agency, refused their demands to investigate the officials who were spying on them. MIT, meanwhile, defended its actions on the grounds that “like all secret services in the world, MIT has fulfilled its prescribed role … and did not commit any unlawful act.”

Pressure on journalists has escalated since the mass anti-government protests in June. Scores were beaten and some sexually harassed by police. And at least 72 others lost their jobs over their perceived sympathy for the protesters. As one of my former editors put it, “A phone call from the prime minister’s office and you’re history.” Self-censorship is the sole means of survival for many of my colleagues.

The corruption probe is set to make our lives even harder. It's widely seen as part of the power struggle between Erdogan and Turkey’s most influential Sunni Muslim cleric, Fethullah Gulen. A long-running accusation leveled against Gulen’s followers is that they have penetrated the bureaucracy, the judiciary and the police force and used their positions to amass evidence against their enemies. Until recently, their main targets were alleged coup plotters in the army, and Gulen and Erdogan collaborated against them. But now there is an open war between the two leaders, and journalists are caught in the middle. Erdogan has made no secret of his belief that the detentions are part of some plot orchestrated by his foreign enemies (read the United States and Israel) and carried out by pro-Gulenist prosecutors and security officials. Journalists who challenge this view are sure to invite Erdogan’s wrath. And those who share it may well find themselves becoming the target of the Gulenists, according to Ahmet Sik, the Turkish journalist who was jailed in 2011 on thinly supported terrorism conspiracy charges after writing a book criticizing the Gulenists. The movement commands a string of media outlets, including Turkey’s largest-selling newspaper Zaman and Bugun TV. Sik, who shouted the now famous words, “Those who touch them [the Gulenists] burn!” as he was being arrested, told Al-Monitor that “the same holds true today.”

The row may have claimed its first victim on Dec. 18 when the daily Sabah fired veteran columnist Nazli Ilicak. Turkish media reports have suggested that the columnist was let go for her spirited support of the Gulenists on a popular current affairs program on CNNTurk, the night before her dismissal. Ilicak confirmed that she had been fired on Twitter, saying, “instead of forfeiting my character I forfeited my job.”