A court jailed three prominent journalists last week to life imprisonment, stoking fears that others in prison for their work may also see harsh penalties. 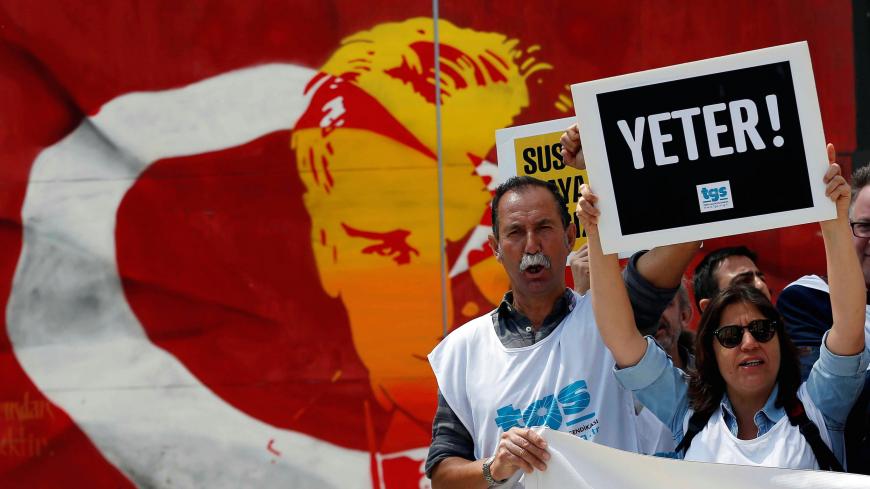 Members of the Journalists Union of Turkey shout slogans during a demonstration to mark World Press Freedom Day in central Istanbul, May 3, 2017. The placard reads: "Enough!" - REUTERS/Murad Sezer

Life sentences for six defendants, including three prominent journalists, for their alleged roles in a coup plot set off shock waves in Turkey, raising the alarm that more journalists charged in cases that human rights campaigners say are politically motivated may also face severe penalties.

The verdict last week against Ahmet Altan, 67, a best-selling novelist and newspaper editor, his brother Mehmet Altan, 65, an economics professor and editor, Nazli Ilicak, 74, a political commentator and former lawmaker, and three employees at a banned newspaper was the first landmark decision in a slew of court cases against journalists and intellectuals accused of involvement in a 2016 failed coup in Turkey or in other press freedom cases.

“These verdicts, the first against journalists accused of being connected to the July 2016 failed coup, set a devastating precedent for the many other journalists and writers in Turkey who are being tried on similarly spurious charges,” Jennifer Clement, president of writers’ group PEN International, said in a statement.

Nearly two years after a bungled coup by a rogue faction of the military killed more than 250 people, courts are issuing verdicts in some of the trials of the more than 50,000 people who were detained in connection with the failed putsch.

Rights observers say judges are acting under political duress during a state of emergency imposed after the coup. The government is ruling by decree without judicial oversight, according to the Council of Europe, the intra-governmental rights watchdog, which has intervened at the European Court of Human Rights (ECHR) in what it sees as Turkey’s “broader pattern of repression against those expressing dissent or criticism of the authorities.”

An Istanbul court on Feb. 16 ruled that Ilicak and the Altans had sought to overthrow Turkey’s constitutional order after prosecutors argued their work contained “subliminal messages” supporting the coup attempt, which is blamed on a religious movement led by US-based cleric Fethullah Gulen. Evidence of their membership in the shadowy network included the possession of single dollar bills.

Their sentence of “aggravated life imprisonment” means they would have to spend the rest of their lives in solitary confinement without the possibility of parole. The journalists will now appeal — if necessary, all the way to the ECHR, where some of them already have applications — a source close to the matter told Al-Monitor.

“They were sentenced for what they said in newspapers and on television, and that outcome raises concerns that it may … influence the debate within the judiciary in other cases, regardless if it is a legal precedent,” said Fikret Ilkiz, a lawyer who represents journalists from the newspaper Cumhuriyet who are accused of coup links in a separate high-profile press freedom case.

“For all of those in jail, every acquittal is a source of hope. This ruling has just the opposite effect, creating despair for those in prison,” he told Al-Monitor.

The next hearing in the trial of 17 journalists and employees of Cumhuriyet, one of Turkey’s oldest dailies and last remaining critical voices, is March 9. Four of the defendants, including Turkey’s best-known investigative journalist, Ahmet Sik, have been in prison for more than a year awaiting a ruling.

Sik was jailed for a year in 2011 for his work exploring the links between the state and the Gulen network, which has made accusations he somehow abetted the Gulenists' alleged role in the coup especially bitter.

“None of this surprises Ahmet because he knows what the state is after spending his 28 years as a journalist working on rights violations,” Yonca Sik, Ahmet’s wife, who heads a campaign for his release, told Al-Monitor. “We are not talking about a legal foundation. We are confronted with an openly hostile legal system.

Turkey’s top court in January ordered Mehmet Altan and Sahin Alpay, a professor of political science and newspaper columnist, be freed because their lengthy provisional detention had violated their constitutional rights in what was widely seen as a precedent requiring the release of other detained journalists.

But lower courts defied the binding decision and refused to release the men after government ministers slammed the ruling.

Turkey ranks as the world’s biggest jailer of journalists, with at least 100 in detention, according to Reporters Without Borders, which ranks Turkey 155th out of 180 nations in its World Press Freedom Index. Dozens of newspapers have been shuttered, and critical coverage of the government by mainstream media is muted.

Many of the detained journalists have been rounded up on charges unrelated to the coup such as alleged support of Kurdish or leftist militants or for exposing official wrongdoing.

Last week a court sentenced opposition lawmaker Enis Berberoglu, a former newspaper editor, to nearly six years in prison for leaking footage to journalists that purportedly showed Turkish intelligence agents ferrying weapons to Syrian rebels in 2014. Two journalists are also on trial in that case, including one in absentia.

One bright spot was the release of Deniz Yucel, a correspondent for Germany’s Die Welt, after more than a year in prison — much of it spent in solitary confinement after President Recep Tayyip Erdogan called him a “terrorist agent” despite the lack of an indictment.

Yucel was freed on the same day as the Altans and Ilicak were sentenced to life and following months of lobbying by the German government. While in prison, Yucel warned he didn’t want to be part of a “dirty deal.”

“It’s very heartening that a man held hostage only for doing his job is now free,” said Yonca Sik. “But Deniz Yucel has another country and state behind him. This was a triumph of German diplomacy, not of the law. For others in Turkey, their state wants to keep them in prison. They have no justice to believe in.”