Three events from Feb. 16. — a deal to release a Turkish-German journalist, the verdict against three prominent journalists and censorship in the trial of a prominent Turkish-Kurdish politician — demonstrate how Turkey's democracy is being undermined. 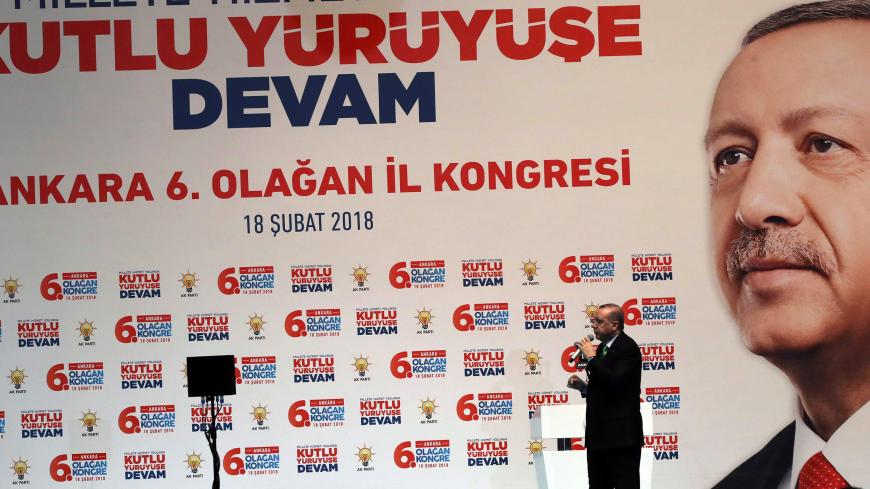 Turkey is living in mind-boggling times. Everything can change and then reverse back in the blink of an eye.

Feb. 16, 2018, was one of those days. Let’s begin with Turkish-German journalist Deniz Yucel, who has been under arrest for unfounded terror charges. Yucel was unexpectedly released from where he spent more than a year. And although his case is pending trial, the travel ban on him was lifted and Yucel was able to head for Berlin on a private jet sent by German authorities.

The case of Yucel, who was once labeled a “terrorist agent” by Turkish President Recep Tayyip Erdogan, has been one of the thorniest issues between Turkey and Germany.

German Chancellor Angela Merkel and other German officials have put great effort to secure his release. But defying their demands, Erdogan reiterated his accusations and emphasized that the judiciary, unlike in Germany, is independent in Turkey.

Yucel’s case was widely interpreted by some observers as “hostage diplomacy” initiated by Erdogan. It succeeded. Turkish Prime Minister Binali Yildirim told Merkel that Yucel might be released soon, and he was indeed released only 24 hours later.

German Foreign Minister Sigmar Gabriel thanked the Turkish government for its efforts in accelerating Yucel’s release. He did not conceal that Yucel’s release was secured through political channels and that it had nothing to do with Turkey’s judiciary.

Yucel’s employer Die Welt thanked the German government and German Foreign Ministry. In sum, nobody thinks his release was a judicial decision.

Respected daily Suddeutsche Zeitung carried the news that Gabriel met with Erdogan twice clandestinely to secure Yucel’s release a week ago in Rome during Erdogan’s visit to the Vatican.

There are widespread speculations that Yucel’s release was a result of a deal with a price tag on it: modernizing the Leopard tanks in Turkey’s arsenal, which Germany was reluctant to do in the wake of Turkey’s military operation in Afrin.

Whatever the deal might be, it drew sharp criticism from many quarters. Suat Kiniklioglu, a former Justice and Development Party lawmaker and a renowned expert on Turkish-German relations, said Yucel’s release was a striking example of how Turkey has morphed into a “banana republic."

Meral Aksener, the leader of Turkey’s newly founded nationalist Good Party, tweeted, “The question is: If this man has nothing to do with the PKK [Kurdistan Workers Party], why did he remain in jail for a year? If he was associated with the PKK, then why was he released on Merkel’s orders? Are we a state under a mandate? Are we a colony?”

More mind-boggling news came the following day. Renowned Turkish journalists and authors Ahmet Altan, Mehmet Altan and Nazli Ilicak were sentenced to life imprisonment on charges of involvement in the coup attempt. They were critical of Erdogan and were jailed in the aftermath of the July 2016 coup attempt.

In the Turkish penal code, “aggravated life imprisonment” means that the convicted would spend the remaining part of his life in prison and die there.

There is an anomaly concerning the verdict about the three veteran pro-democracy public intellectuals: Only a month ago, Turkey’s Constitutional Court had issued a ruling that the journalists should be freed. However, with government support, a local court defied Turkey’s highest court’s decision and they remain in jail.

On the same day, a hearing took place for Selahattin Demirtas, the leader of the pro-Kurdish Peoples’ Democratic Party (HDP). HDP is the third-largest bloc in Turkey’s parliament. Demirtas has been in prison since November 2016.

In his defense, which took 22 hours and lasted three days, Demirtas made groundbreaking revelations that would normally shake the earth.

However, like Yucel’s release or the journalists’ trials, Demirtas’ defense fell victim to media censorship in Turkey.

Nevertheless, the HDP is planning to publish his defense, which is being widely described as “historical.” Sezai Temelli, the HDP’s new co-chairman who replaced Demirtas, is certain that his predecessor’s defense will be taught in law schools in the future.

The most striking part of his defense was about the feud initiated by Erdogan against him. Demirtas, who ran against Erdogan in 2014, was asked to withdraw from the elections by Erdogan, who sent envoys for that purpose. He was told by those envoys that Erdogan was very irritated by his candidacy. The envoys, who were in the delegation that once conducted negotiations with the PKK on behalf of the government, told Demirtas, “Erdogan asks while the [Kurdish] peace process is underway, why is he running for presidency against himself?”

Demirtas’ response was, “We are not his [Erdogan’s] slaves. We are engaged in the [peace] process to enhance democratic politics. We are trying to decommission the PKK, but to disband the HDP is not our objective. Why is he irritated from our strengthening within the context of democracy?”

Demirtas also revealed that he was approached by Erdogan to refrain from participating in the June 2015 elections. Erdogan proposed that he not run in the elections as the HDP but as an independent candidate.

An interesting anecdote Demirtas mentioned in his defense was that two officials — allegedly then-Interior Minister Besir Atalay and national intelligence chief Hakan Fidan — brought him a handwritten letter from Abdullah Ocalan, the leader of the outlawed Kurdish militants — to force him to coordinate with Erdogan.

Demirtas also claimed that he has the evidence and can provide witnesses for this revelation. The court ruled a continuation of his imprisonment pending trial.

Demirtas’ defense is uniquely important, as it sheds light on how and why the recent Kurdish peace process in Turkey failed and Erdogan’s unmistakable part in that.

But most importantly, by criminalizing the most popular, peace-oriented, young and bright Kurdish political leader in a prison cell, Turkey might have been burying the biggest hope for a political settlement of the Kurdish question and denying an exit to peace.

With the shameful deal on the Turkish-German journalist, the verdict of aggravated life imprisonment for the prominent journalists and the censorship of the trial of Turkey’s most promising Kurdish political leader all in one day, Feb. 16 has become the “Black Friday” in the history of Turkish democracy.

by Murielle KASPRZAK and Joseph SCHMID | AFP | May 26, 2022
END_OF_DOCUMENT_TOKEN_TO_BE_REPLACED