Already-strained Turkish-German ties take a turn for the worse as Erdogan calls on Turks in Germany not to vote for mainstream German political parties, including Chancellor Angela Merkel’s party. 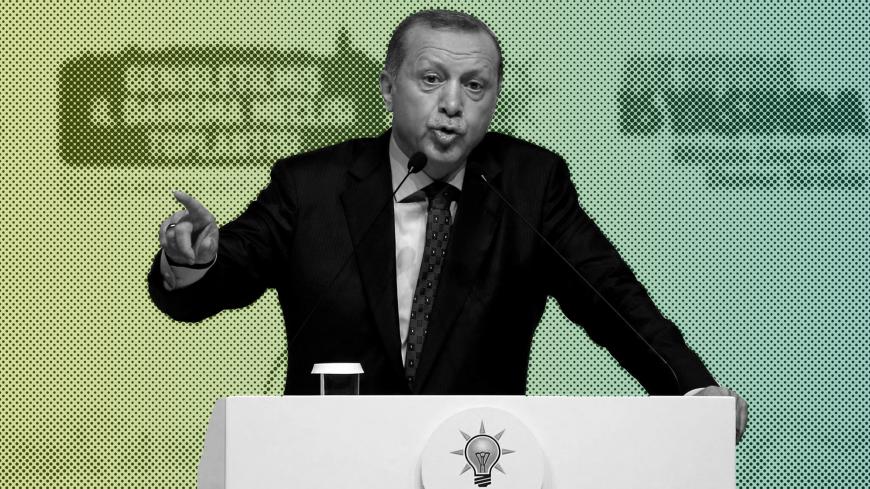 Turkish-German ties continue their downward spiral. President Recep Tayyip Erdogan remains on the warpath against Berlin, despite concerns within his Justice and Development Party, especially among quarters overseeing the economy.

The angry tone in German retorts to Erdogan is also escalating as Chancellor Angela Merkel unfolds a series of measures including pressurizing the European Union to act against Turkey and punish Ankara economically.

Merkel has announced that they want the EU Commission to curb funds to Turkey and not enhance the EU-Turkey Customs Union. Nevertheless, she remains opposed to ending Turkey's EU membership talks for pragmatic reasons.

Tensions, which seem to be nearing a point of no return, are also expected to make life for Germany’s estimated 3 million ethnic Turks more difficult, especially for Erdogan’s hundreds of thousands of supporters in that country.

None of this worries Erdogan, though. He upped the ante last week when he labeled mainstream German political parties and their leaders — including Merkel — “enemies of Turkey” and called on Turks not to vote for them in Germany’s federal elections Sept. 24.

Talking to reporters after Friday prayers in Istanbul Aug. 18, Erdogan maintained that the Social Democratic Party of Germany (SPD) and the Christian Democratic Union party (CDU) were “bashing Turkey” for the sake of votes.

“I in turn call on all my kin in Germany not to make a mistake and support these parties. The Christian Democrats, the SPD or the Greens — they are all enemies of Turkey. Support those parties that do not show enmity toward Turkey,” Erdogan said. He added that “this had become a matter of honor” for Turks in Germany.

Erdogan’s anger increased recently over reports that the fugitive Adil Oksuz, who Ankara says was one of the principal conspirators of last year’s failed coup attempt, was spotted in Germany.

Ankara demanded that Berlin find and arrest Oksuz and extradite him to Turkey. Germany has thus far refused to extradite any members of the so-called Fethullah Gulen Terror Organization, which is accused of planning and executing the coup attempt.

“As long as emergency rule in Turkey introduced after the coup attempt continues, there is no chance that Germany will extradite anyone,” Bagci told Al-Monitor. “There is no confidence in the Turkish legal system under emergency rule,” he added.

For its part, Berlin is fuming over the arrests and imprisonment of German-Turkish journalists Deniz Yucel and Mesale Tolu, as well as German human rights consultant Peter Steudtner, on terrorism charges. Foreign Minister Sigmar Gabriel said recently that Yucel “was being held hostage” by Turkey.

This characterization by Berlin clearly applies to other German-Turks detained in Turkey. Erdogan said in April that Yucel “will never be released as long as I remain in this office,” repeating emphatically, “Never!”

News that Spain had detained German-Turkish author Dogan Akhanli last week in response to an Interpol warrant issued by Turkey poured more fuel on the anger felt in Berlin. Akhanli is also being sought by Ankara on terrorism charges.

Merkel accused Turkey of abusing Interpol privileges, a criticism seconded by the EU Commission. Spain subsequently released Akhanli, but only on condition that he remain in the country until the matter is resolved.

The arrest of German citizens is only one of Berlin’s grievances against Ankara. Others include Ankara’s tit-for-tat refusal to allow German deputies to visit German soldiers stationed at the Incirlik Air Base, where they are part of the US-led coalition against the Islamic State. Berlin is in the process of redeploying its forces to Jordan.

Ankara’s many grievances against Berlin, on the other hand, include the Armenian genocide resolution adopted by the Bundestag in 2016 and the permission local authorities have given to rallies in support of the outlawed Kurdistan Workers Party, while refusing permission to Erdogan and Turkish government ministers to hold rallies in Germany to canvass Turks.

Erdogan’s call on Turks in Germany not to vote for mainstream parties raised hackles on the German side, as expected. Merkel rejected this as “meddling” in the German elections and underlined that German voters had the right to vote freely, regardless of background.

SPD leader Martin Schulz tweeted that Erdogan “had lost any sense of proportion,” adding that they would “stand all the more on the side of all those who are struggling for a free and democratic Turkey."

Gabriel condemned the "unprecedented act of interference" by Erdogan, only to be dressed down by Erdogan. "Who are you to talk to the president of Turkey? Know your limits. He is trying to teach us a lesson. … How long have you been in politics? How old are you?" Erdogan said angrily as he hit back at the German foreign minister.

It is not clear how Erdogan’s call will resonate with Turks in Germany, 59% of whom voted for his executive presidency in the constitutional referendum in April.

Bagci believes most Turks will heed his call. “This is a matter of social hypnosis,” he said.

If they are not to vote for the CDU, the SPD (the party they traditionally vote for) or the Greens, Germany’s Turks have hardly any options left. There are suggestions that they may veer toward the liberal Free Democrat Party (FDP), which Erdogan has not targeted.

The problem, however, is that the FDP is not enamored with Erdogan either. Earlier this year, its chairman, Christian Lindner, likened Erdogan’s purge in Turkey against his opponents to the actions of the German Nazi Party in the 1930s. He said Erdogan was using the coup attempt the way the Nazis used the Reichstag fire in 1933.

Other than that, all that is left for the Turks is the far-right Alternative for Germany and the Christian Social Union, which they are not likely to support.

Some say Erdogan is trying to herd his supporters toward two parties established by disgruntled Turks: the Alliance of German Democrats (ADD) — a name that has angered German nationalists — and the Renewal and Justice Party (BIG).

BIG, which has said it will not contest these elections, has called on Turks to boycott the balloting, while ADD will only run in North Rhine-Westphalia, reportedly to test the waters.

According to Bagci, these parties remain insignificant.

Many agree that Erdogan’s call will not only make life more difficult for Germany’s Turks, but it will also have negative consequences for Turkey.

“The dramatic change in Turkish-German ties is not to Turkey’s advantage both in terms of bilateral relations or on the global level, where Berlin often acted as an advocate for Turkey in the past,” Bagci said.

He said Germany had also made mistakes, especially with regard to allowing pro-PKK advocacy on its soil, and he indicated that Erdogan had turned this into an advantage.

“Erdogan is a successful polarizer and has managed to draw Germany into the kind of fight that Berlin refused to be drawn into by Poland’s [Jaroslav] Kaczynski,” Bagci said, referring to the former Polish prime minister. “This works to his political advantage at home” he added.

Bagci does not believe, however, that Turkish-German business ties will be affected from this crisis to the extent that some fear. “Turks may admire Erdogan’s defiance against a major power like Germany, but they are not prepared to give up on their Mercedes,” he said.