Ending 2017 on a comparatively higher note, recent conversations and visits between officials from European countries and Turkey could help nudge both sides to better relations in 2018. 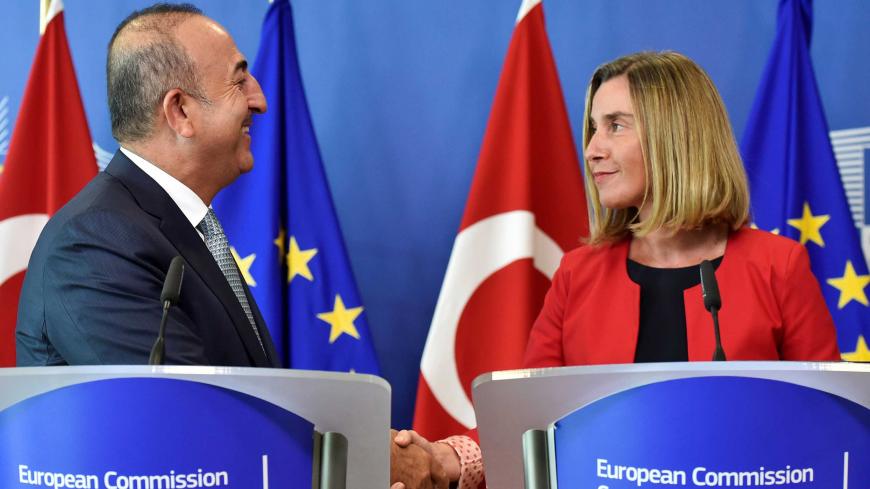 Turkey and key European Union members like Germany and the Netherlands have started to exchange positive messages, signaling a desire to leave behind what was possibly the worst year in Turkish-European ties in recent memory. Reconciliatory statements are being backed by high-level phone conversations and visits aimed at increasing cooperation on issues of mutual interest.

President Recep Tayyip Erdogan will be in Paris this week for talks with French President Emmanuel Macron, with terrorism, the migration crisis, Syria and the status of Jerusalem high on the agenda.

Turkish Foreign Minister Mevlut Cavusoglu, on the other hand, is due in Germany over the weekend for talks with his German counterpart Sigmar Gabriel aimed at normalizing bilateral ties, which were near a breaking point in 2017.

Serious problems that have undermined Turkish-European ties, however, remain in place, indicating that the road ahead is still bumpy and beset by pitfalls that could result in new upheavals.

Meanwhile, not everyone is convinced that the friendly outreach to Ankara by Berlin, The Hague and other European capitals is driven by the best of motives regarding Turkey’s EU membership bid.

Turkey’s positive response to the friendly overtures from Europe shows that Ankara is also wary of a total breakup with Europe, given the detrimental effect this would ultimately have on Turkey’s vital interests.

Erdogan’s attitude toward Europe, often marked by unrestrained insults in the past, also saw a marked improvement after EU members supported the UN resolution, co-sponsored by Turkey and Yemen, against US President Donald Trump’s decision on Jerusalem.

Erdogan has been underlining the fruitful phone conversations he held on this topic with European leaders such as Macron, German President Frank-Walter Steinmeier, German Chancellor Angela Merkel and Pope Francis.

Friendly remarks by Dutch Prime Minister Mark Rutte as the year was coming to a close also helped break the ice. “I think that it will be good if relations are repaired. Turkey is a NATO partner,” Rutte told the Dutch daily De Telegraaf in an interview. He added that ministerial contacts aimed at improving ties between The Hague and Ankara were also continuing.

Holland is not just Turkey’s NATO ally but also the largest investor in Turkey, with investments in excess of $22 billion.

Erdogan had accused the Netherlands of behaving like Nazi Germany after Rutte’s government prevented Turkish ministers from canvassing Turkish expatriates in Holland eligible to vote in Turkey’s constitutional referendum in April.

The proposed constitutional changes, which have since been adopted, aimed to turn Turkey into a presidential system, giving Erdogan absolute power over the legislature and judiciary.

Erdogan leveled the same accusation at Germany after Turkish ministers or members of the ruling Justice and Development Party (AKP) were prevented from holding rallies to seek support for the constitutional changes from expatriate Turks.

In the closing days of the year, German Foreign Ministry spokeswoman Maria Adebahr told reporters in Berlin that the foreign ministers of the two countries had talked over the phone on Dec. 22 and agreed to meet to iron out differences.

Adebahr’s announcement followed the release in Turkey of German human rights activist Peter Steudtner, who was being held on terrorism charges. Gabriel had referred to Steudtner, whose trial is still pending, and other German citizens held in Turkey on similar charges as “Ankara’s hostages.”

The release in Turkey of some of the other German citizens being held, and the easing of conditions for Deniz Yucel, the German-Turkish journalist who was being held in solitary confinement since February 2017 on espionage charges, was also welcomed by Berlin.

The Yucel case nevertheless remains a bone of contention between the two countries. Reflecting a more conciliatory tone toward Germany, Cavusoglu told the German broadcaster Deutsche Welle last week that he was not happy over the delay in the preparation of the indictment against Yucel. He said his government was trying to speed this up.

Cavusoglu also expressed his belief that 2018 will be a good year for Turkish-German ties. He is due to travel to Gabriel’s hometown of Goslar in Lower Saxony on Jan. 6, to follow up on their meeting in Cavusoglu’s hometown of Antalya in November.

Erdogan responded to the friendly overtures from Europe by saying that Turkey had no problems with Germany or the Netherlands. Talking to reporters on Dec. 27 during a tour of African countries, he referred to the Dutch and German leaders as “old friends,” adding that Ankara “would of course like to have good ties with the EU.”

Meanwhile, more stringent measures in Germany against organizations promoting the outlawed Kurdistan Workers Party (PKK) have been welcomed by Ankara as a step in the right direction.

Nevertheless, problems relating to the PKK, as well as the refusal by Berlin to extradite persons Ankara accuses of involvement in the failed coup against Erdogan in 2016, continue to cloud ties.

The deteriorating state of democracy and human rights in Turkey also continues to pose insurmountable obstacles not only to advancing Ankara’s EU membership bid but also to fully normalized ties between Turkey and Europe.

Talking to journalists during his New Year press conference, held only days before Erdogan was due in Paris, President Macron described Turkey as an authoritarian state where press freedoms are curbed and journalists incarcerated.

Macron, who said he would discuss this with Erdogan in Paris, added, however, that he opposes severing dialogue with countries that don’t share French standards on press freedom.

Retired Ambassador Uluc Ozulker, who was Turkey’s envoy in Paris in 2002-2005, sees a hidden message in these remarks and in the overtures from Germany and the Netherlands.

“The EU has made its position on Turkey’s membership bid clear and has forced Ankara into a corner in this regard,” Ozulker told Al-Monitor. “Ankara’s EU bid can’t mature with so many members opposing it and with Turkey drifting away from democratic criteria,” he added.

Ozulker said Europe does not want to push Turkey over the brink either because it needs it for geo-strategic reasons. “It wants to encourage Turkey to remain close to Europe without becoming an EU member,” he said.

Ozulker also pointed to recent remarks by Bulgarian President Boyko Borissov, whose country took over on the EU’s term presidency on Jan 1. Borissov, who will be in Istanbul on Jan. 7 for the inauguration of a restored Bulgarian Orthodox church, believes in the need for honesty with Turkey.

“We should stop being two-faced about Turkey’s EU membership. It is best if we sit down and work out a special agreement between Turkey and the EU,” Borissov told the Bulgarian state broadcaster BNT.

Ankara opposes any offer short of full membership and was also displeased with Gabriel’s suggestion that the Brexit deal could provide a model for Turkey-EU ties.

“Even if the EU was ready to admit Turkey tomorrow, Ankara has no desire to fulfill the democratic prerequisites for membership,” a Western diplomat, speaking on condition of anonymity, told Al-Monitor. “It fears that doing so will weaken Erdogan’s hold on power.”

Nevertheless, Ankara needs to maintain strong economic ties with EU members like the Netherlands and Germany, which are the largest investors in Turkey and which provide the largest markets for Turkish goods.