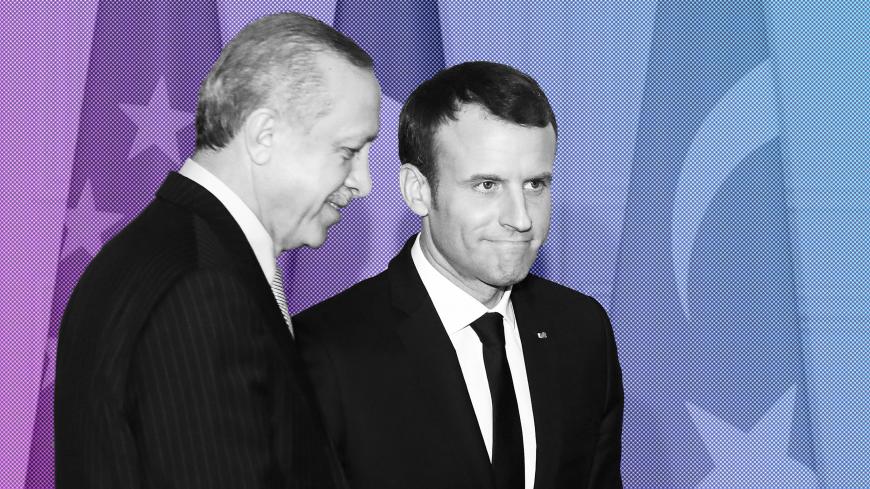 Turkish President Recep Tayyip Erdogan’s visit to France on Jan. 5 and Foreign Minister Mevlut Cavusoglu’s visit to Germany a day later point to a new page in Turkey’s relations with Europe. What these visits did not do, however, is provide any indication that Ankara's European Union membership is back on track.

To the contrary, the general impression among Turkish analysts of different political shades is that these visits may have sounded the death knell for membership.

Turkey’s pro-European secular liberals may be lamenting Ankara’s gradual abandonment of its EU perspective. This confirms for them that a less democratic and more Middle Eastern Turkey is emerging.

Pro-government nationalist and Islamist quarters, including members of Erdogan’s close advisory circle, however, are not perturbed. They talk about a new chapter in ties with Europe based on realism, rather than pipe dreams laced with broken promises.

This new relationship, they argue, will also disarm European countries, which, they believe, have been using the political and legal criteria that Ankara has to fulfill for EU membership to undermine Turkey.

Liberals, however, see such arguments as more proof that Erdogan and his administration have no interest in furthering European-style, liberal democracy in Turkey.

French President Emmanuel Macron was bluntly clear about Ankara’s EU bid after his talks with Erdogan in Paris. He told reporters during a press conference with Erdogan that the current situation in Turkey “did not allow for an outcome in the coming years” with regard to Ankara’s EU bid.

This was a polite way of saying, “Don’t expect this bid to go anywhere.”

"We should … see if we cannot rethink this relationship, not in the framework of the [EU] integration process, but perhaps a cooperation, a partnership," Macron said. He underlined, however, that Turkey had to remain anchored in Europe.

Almost concurrently with the Erdogan-Macron meeting, German Foreign Minister Sigmar Gabriel hosted Cavusoglu privately in his home in the town of Goslar, which reportedly was the first time he did this for any foreign dignitary.

Talking to reporters after his meeting with Cavusoglu, Gabriel was upbeat. “It’s not possible to say that we agree on every subject, but we consider it a duty to overcome all difficulties,” Gabriel said, adding that both sides were displaying a strong will to do this.

Cavusoglu also struck a positive note. Thanking Gabriel for hosting him so warmly in his home, he said Turkey was earnest in its desire to put ties back on track and to carry them to a higher level.

The adoption by the German parliament of a resolution in 2016 recognizing the killing of Armenians in 1915 as genocide, a claim Turkey strongly rejects, had already fouled the atmosphere.

Other points of contention include Berlin’s refusal to extradite Turks who Ankara is seeking over the failed coup attempt against Erdogan in 2016 and Turkey’s arrest of German citizens, including journalists, on terrorism and espionage charges.

Activities in Germany by groups supporting the outlawed Kurdistan Workers Party, which Berlin also lists as a terrorist organization, have also contributed to poisoning the well in Turkish-German ties.

Nevertheless, Gabriel’s and Cavusoglu’s remarks indicate a desire to turn the page in bilateral ties, despite these continuing problems. But friendly as the meeting of the two foreign ministers may have been, it provided nothing to suggest a breakthrough in Turkish-EU ties.

The sides merely expressed their desire to overhaul the 1995 Customs Union agreement between Ankara and the EU, which remains in force despite worsening prospects for Ankara’s EU membership bid.

Gabriel suggested recently that the Brexit deal the EU will have with Britain could provide a model for Turkey-EU ties.

Ankara remains officially opposed to any offers short of full EU membership. Developments suggest, however, that it may also be inclined toward a new relationship with Europe that is not burdened by problems emanating from Turkey’s EU bid.

Meanwhile, pro-government commentators have started to provide the theoretical thinking behind this new approach.

“Moving forward, rationality must thrive over irrationality and pragmatism over idealism in order to normalize Turkey's relations with Europe,” wrote Fahrettin Altun, a columnist for the pro-government Sabah daily.

“Turkey's relationship with Europe cannot run on passion. Instead, it must be based on mutual interests,” Altun added.

Fuat Bol, a columnist also sympathetic to Erdogan, said that during Erdogan’s visit to Paris “Macron had finally uttered what is in European mouths.” He argued in his column in Milliyet daily that Europe never intended to have equal relations with Turkey, desiring instead to see a submissive Turkey that will bend to its will.

“After this bitter experience, Turkey has selected the best path. … We will follow a multidimensional foreign policy based on relations … that serve our country’s interests,” Bol wrote.

Disregarding Macron’s discouraging remarks about Turkey’s EU bid, Erdogan returned from Paris happy. He told reporters accompanying him on his flight back that he “hoped 2018 would be the year when relations with Europe would improve.”

Erdogan was also buoyed by the signing of an agreement with France for the purchase of 25 Airbus passenger planes and the accord concerning the joint production of a French-Italian air defense system.

Questioned during his flight back from Paris about Macron’s less than encouraging remarks about Ankara’s EU bid, Erdogan used oddly evasive language to avoid criticizing Macron.

“I didn’t want to understand what exactly it was he meant. I preferred to concentrate on getting them to understand what I was saying,” Erdogan said. He was referring to his remarks in Paris in which he underlined that Turkey was fed up waiting at the EU’s door. “I hope they understood,” he said.

Asli Aydintasbas, a senior policy fellow at the European Council on Foreign Relations, argued in her column in the opposition daily Cumhuriyet after the Paris meeting that Turkey’s EU membership bid seems to have been shelved, not to be revived again.

“The meeting at the Elysee Palace between Macron and Erdogan, who get along very well having talked over the phone 12 times and met face-to-face three times, showed that Turkey has entered the ‘privileged partnership phase’ with the EU,” she wrote.

Retired Ambassador Ali Tuygan believes that the way to revive Turkish-EU ties is for Turkey to find the will to return to the democratic path and fulfill its obligations under the European Convention of Human Rights.

“The problem is there is no will,” Tuygan wrote in his blog. He wrote, however, that “laying Turkey’s EU project formally in its grave will be an unpleasant task even for this government.”

It may not be such an unpleasant task for Erdogan, though. A pragmatic relationship with Europe, which does not entail the negative fallout from Ankara’s refusal to meet criteria necessary for EU membership, could be enough for him.

The fact that this relegates Turkey to the league of an undemocratic Middle Eastern country, which nevertheless has good practical ties with key European powers, seems not to matter for him or his supporters.