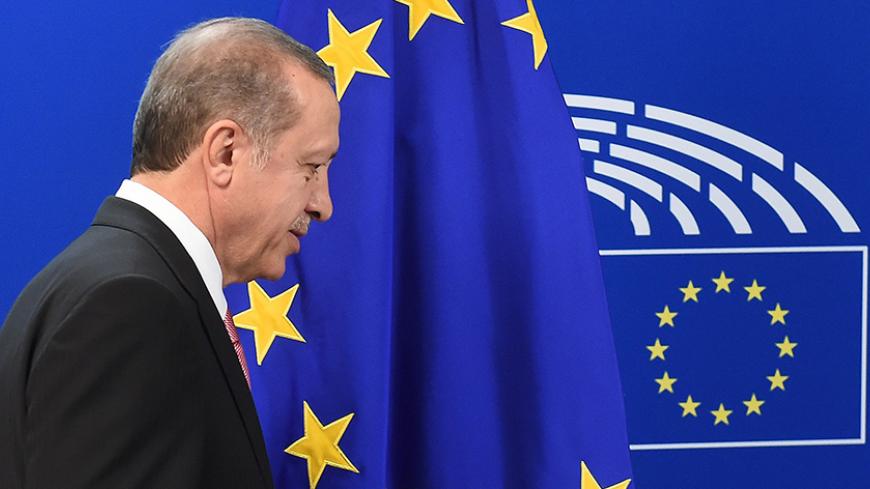 Turkish-EU ties appeared set on a collision course before the April 16 referendum that aimed to increase the powers of the Turkish presidency by switching Turkey to a presidential system of government and, by extension, increasing the powers of President Recep Tayyip Erdogan. Accusations about dictatorial tendencies were leveled at Erdogan; he countered by accusing European leaders of acting like Nazis and supporting terrorists and coup plotters against Turkey.

Now that Erdogan has gotten what he wants from the referendum, regardless of the continuing debate about the fairness of the vote, tensions between Ankara and the EU may be subsiding.

Meeting in the Maltese capital of Valletta last week, EU foreign ministers chose to disregard calls from within their ranks (from Austria) and from the European Parliament for an end to or suspension of talks on Turkey’s EU membership because the country has strayed from the democratic path.

Prior to the meeting in Valletta, the Parliamentary Assembly of the Council of Europe had placed Ankara on its watch list over the deteriorating state of its democracy. This is why the leniency accorded Turkey by EU foreign ministers caught many by surprise.

EU ministers went a step further during their informal meeting — known in EU jargon as the “Gymnich” — and threw an olive branch to Ankara.

In her statement after the meeting, Federica Mogherini, the EU’s high representative for foreign affairs and security policy, said they "respected the result of the referendum” even though the Council of Europe’s Venice Commission and the Organization for Security and Cooperation in Europe (OSCE) had flagged voting irregularities.

Mogherini added that the implementation of the constitutional amendments decided on by the referendum should be in line with Council of Europe and OSCE recommendations. The crucial point for Erdogan, however, is that the EU is not formally rejecting to the changes that will make him Turkey’s sole ruler.

Mogherini also said Turkey’s EU membership bid would continue. “It is not suspended, nor ended, but as you might know, we are currently not working on opening any new negotiation chapter.”

Mogherini’s remarks pleased Ankara, even though it is obvious that its membership bid can’t proceed under these circumstances.

Erdogan had threatened to hold a referendum on whether Turkey should end this bid unilaterally, but that was clearly contingent on the EU’s position regarding the referendum results.

It is unlikely that Turkey will opt to end this bid unilaterally now. Foreign Minister Mevlut Cavusoglu, who was also invited to Valletta — where judging by press reports he had very chummy meetings with key European colleagues — was clearly happy.

“I saw the positive atmosphere [at Valletta]. I also saw that they have understood their mistake if indeed they are honest,” he told the Turkish media after the meeting.

The continuing defiance of Europe reflected by Cavusoglu’s remark was clearly aimed at a domestic audience. But he also said nothing to indicate that Ankara would heed calls for strengthening Turkey’s democracy.

While the results of such Gymnich talks are not binding, they nevertheless provide an indication about the official line the EU will take.

The democratic opposition in Turkey clearly expected stronger language from the EU regarding the results of the referendum. It has, however, become apparent that Turkey’s strategic importance for the West has yet again trumped European desires to put Erdogan on notice.

This also vindicates Erdogan and strengthens his hand as he prepares to meet European leaders at the NATO summit at the end of this month.

“Because of our strategic value [and capacity to do damage], they prefer to keep us where we are rather than cut off negotiations [for EU membership]. It’s almost as if they are saying, ‘Do what you want, as long as you don’t harm our interests,’” retired Ambassador Oguz Demiralp said, adding that this also suits Ankara.

German Foreign Minister Sigmar Gabriel said prior to the start of the Valletta Gymnich that his government was "strictly against breaking off the accession talks” with Turkey, indicating that this would be a “completely wrong reaction.”

"In NATO, we did not exclude Turkey even during the times of military dictatorship [in Turkey]. Why should we now have an interest in pushing it in the direction of Russia?" he said to reporters.

French Foreign Minister Jean-Marc Ayrault seconded Gabriel. "How can we ignore Turkey? Nobody wants a breakup with Turkey,” Ayrault said, pointing to the fight against terrorism and dealing with Syrian refugees among the key areas where cooperation with Ankara is vital.

Mogherini added, “I think I am on the record in the last couple of years as saying that Turkey is not only a candidate country, [but also] that Turkey is ... a strategic partner for the European Union on many different things."

In an interview with Welt am Sonntag, NATO Secretary-General Jens Stoltenberg also underlined Turkey’s strategic importance for the West, especially regarding relations with Russia.

“Without doubt, NATO would suffer from weakness without Turkey,” he said, adding, “Turkey is a key country for the security of Europe.”

An EU official briefing the press after the Valletta talks indicated that “nobody wanted any rash decisions, like formally suspending the accession negotiations at this time, except for the usual suspects — the Austrians.”

Retired Ambassador Unal Cevikoz argued that the EU is not admitting to mistakes toward Turkey, as Cavusoglu claims, and said there is no fundamental change in the EU’s position on Turkey.

“It is applying the most reasonable, diplomatic and polite manner to show Turkey the path it must follow so that it draws lessons and does its homework,” Cevikoz wrote in his column for the daily Hurriyet.

Demiralp is not optimistic about that happening. “We all know how weak the possibility of Turkey’s returning to the reform agenda is,” he said, indicating that Ankara’s ties with the EU will continue to weaken because of this.

“Turkey and the EU will have to create a new framework for their relationship one way or the other,” Ulgen said in an article for The Financial Times.

Former Belgian Prime Minister Guy Verhofstadt, who heads the Alliance of Liberals and Democrats for Europe in the European Parliament, also believes that Turkish accession to the EU is not realistic anymore. He says a new association agreement has to be worked out for Ankara.

Giving prevailing circumstances in Turkey and Europe, that is a path that Erdogan could also choose to follow, although this remains debatable.

For the moment, the pro-government camp in Turkey is happy about the course of ties with the EU post-referendum.

“They say Europe doesn’t like us. That’s true, but we have to put aside that slogan now,” Mustafa Karaalioglu, a columnist for the pro-government but moderately critical daily Karar, wrote recently.

“Europe likes us to the extent that we like Europe. That is the case today, as it was 500 years ago. The question is how much do they respect us? The rest is irrelevant,” Karaalioglu wrote.

Judging by Mogherini’s statement after the Valletta meeting, Erdogan has gotten respect for now at least. How Turkish-EU ties shape up after this, however, is anyone’s guess.