Turkey, EU can't seem to walk away from each other

The fact that Turkey sits on the most strategic real estate in the world ensures that the EU can’t put its ties with Ankara at risk, regardless of objections to Turkey's politics. 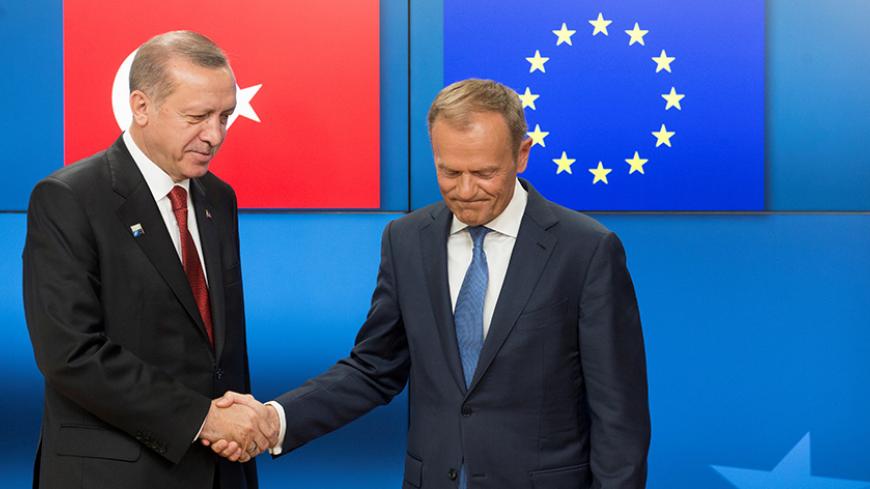 Turkey is clearly experiencing unprecedented tension with the European Union (EU), which — technically speaking — it is in line to join as a full member provided it fulfills the necessary criteria. That appears an almost impossible prospect, however, given what is transpiring in Turkey, let alone the state of a Europe in flux.

This has not prevented both sides from keeping up the pretense of continuing with Ankara’s membership talks, even though these have produced nothing in recent years. The simple fact is that for all the talk—and threats from both sides about ending membership negotiations and severing ties — Turkey and the EU are unable to walk away from each other for practical reasons.

This dependence ensures that their dialogue continues no matter what. It was Donald Tusk, the president of the EU Council, who sought a meeting with President Recep Tayyip Erdogan during the NATO summit in Brussels on May 25.

Tusk’s move came at a time when many in Europe wanted Erdogan punished. Erdogan accepted Tusk’s invitation and also held separate talks with Jean-Claude Juncker, the president of the European Commission on the sidelines of the NATO summit.

Despite media reports about the “frosty atmosphere” during these meetings, EU representatives presented a somewhat different picture. "The EU and Turkey must and will continue to cooperate. Major issues of common interest were discussed in detail in a good and constructive atmosphere," an EU spokeswoman in Brussels told Reuters.

Other EU officials said the 2016 Turkey-EU agreement aimed at curbing the flow of illegal migration to Europe, the funds Ankara would receive for this, and the question of visa-free travel in Europe for Turks were among the key topics discussed with Erdogan by Tusk and Juncker.

The decision by EU foreign ministers at their meeting in April in Malta not to sever ties with Ankara appears, therefore, to be holding regardless of existing strains.

Following the Malta meeting, EU foreign policy chief Federica Mogherini said the ministers “respected” the results of the April 16 referendum in Turkey, even though many European leaders argue that this gives Erdogan almost dictatorial powers.

The bottom line is that the EU could not afford to burn its bridges with Ankara, despite the findings of the Organization of Security and Cooperation in Europe that the referendum was technically flawed and held in a less than fair atmosphere.

Mogherini also spoke about the EU’s expectations in regard to democracy and human rights in Turkey, but there was no bite to her words.

Developments in the Middle East and — on a broader plane — the East-West rivalry spearheaded by the United States and Russia are ensuring that the drifting apart of Ankara and the EU is contained, for now.

Former Danish Prime Minister Anders Fogh Rasmussen, who was NATO secretary-general from 2009-2014, summed up the picture in remarks to the Financial Times earlier this week.

“[Turkey] is a bridge between the West and the Middle East and Central Asia. It has the second-largest army within NATO. So I would argue from a security point of view that we need Turkey as much as Turkey needs us,” Rasmussen said.

Rasmussen was referring to Turkey’s membership in NATO, but the alliance and the EU are so entwined on multiple levels that his remarks apply to the EU’s ties with Turkey, too.

Given the degradation of Turkey’s democracy in recent years, membership talks with Ankara should have been suspended on technical grounds by now, since respect for democratic values is a precondition for these. That, however, did not happen and is unlikely to.

What we have instead is a series of statements from influential European leaders such as German Chancellor Angela Merkel, who expressed her opposition to ending membership talks with Ankara even though she is known to be opposed to Turkey's membership in principle.

The latest row between Turkey and Germany, which has forced Berlin to redeploy its forces from Incirlik Air Base in Turkey to Jordan in order to continue contributing to the US-led coalition against the Islamic State, is not expected to alter Berlin’s basic stance either.

The need to maintain the migration deal with Ankara and the need to cooperate with Turkey on many levels because of the 3 million Turks living in Germany appear to be Berlin’s main considerations.

In the meantime, Turkey has moved even further away from democracy, as the purge of alleged supporters of last year’s failed coup attempt against Erdogan continues unabated and thousands are in prison without due process.

This flies in the face of the relatively soft approach by the EU toward Turkey, as many in Europe also point out. Retired Ambassador Temel Iskit, whose former posts include Brussels, says that because of considerations relating to EU security and economic interests, it is very unlikely that the EU will sever ties with Turkey.

“Turkey, with its large population, is sitting on the most strategic piece of real estate in the world. This ensures that the EU cannot put its ties with Turkey at risk,” Iskit told Al-Monitor. “The EU talks about democracy and human rights, but when push comes to shove it looks to its interests,” he added.

Ankara’s threat to suspend the migration deal if the EU doesn’t honor its promise to grant visa-free travel for Turks and does not release more funds for refugees in Turkey has also proved to be hollow so far.

Iskit said that despite Erdogan’s much-vaunted anger with Europe, he is also aware that ties with the EU can’t be severed without harming Turkey’s vital interests. “At any rate, it is not easy to sever this relationship because of the complex and intricate set of ties that have emerged between the sides over the years,” Iskit said.

The annual report on Turkey by the Foreign Affairs Committee of the European Parliament released June 20 harshly criticizes Ankara for its democratic shortcomings and will undoubtedly lead to new tensions between the Turkey and the EU, as Al-Monitor’s Cengiz Candar pointed out in a recent article.

EU Parliament reports, however, are nonbinding, and none of its many harsh reports on Turkey in the past have had a restraining effect on Ankara or dampened the EU’s desire to keep channels of dialogue with Turkey open, regardless of Ankara’s democratic shortcomings.

Some in Europe are arguing that the EU has come out on top when it comes to Turkey because it forced Ankara into cooperation on the migrant deal without bowing to its demands.

“Turkey is currently seeking to reset its relations with the EU—and it is doing so without winning visa-free travel to the bloc for its citizens or [without] signs of any progress in its EU accession negotiations,” Natalie Nougayrede, a foreign affairs commentator for The Guardian, wrote June 24.

“It looks like the EU has played its cards rather well with this complex and antagonizing partner,” she added.

But the EU is supposed to be all about values. It’s odd, therefore, to suggest that it “played its cards well” when it is patently clear that it is ready to override its own values and maintain the pretense of keeping the doors for membership open to an increasingly undemocratic Turkey for the sake of Europe’s strategic interests.

But as Iskit pointed out, all that this really means is that it’s “business as usual” in Turkish-EU ties.