Did EU meddle with Turkish elections? 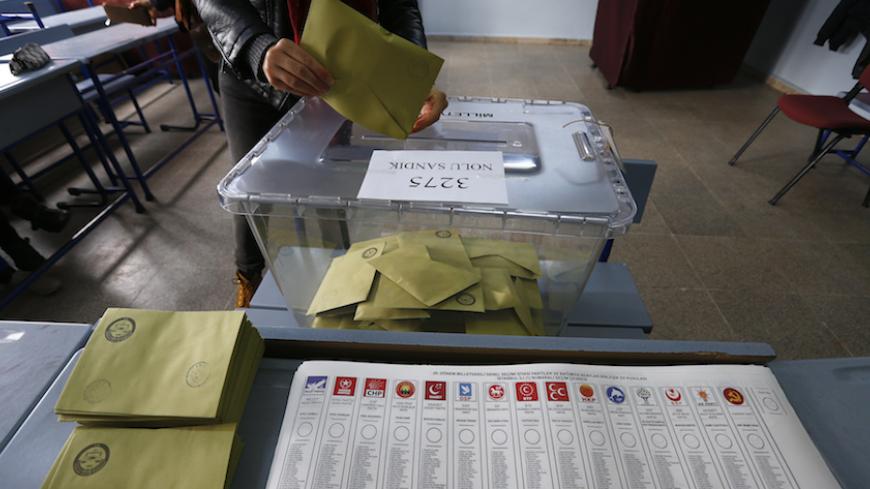 A woman casts her ballot at a polling station in Istanbul, Turkey Nov. 1, 2015. - REUTERS/Murad Sezer

ANKARA, Turkey — The Turkish president’s patience was running out. His EU interlocutors were offering him 3 billion euros ($3.3 billion) for stemming the flow of Syrian refugees to Europe.

President Recep Tayyip Erdogan reminded Jean-Claude Juncker, the EU Commission president, and Donald Tusk, the head of the EU Council, that a few months before they had given Greece 400 billion euros ($445 billion) to keep it afloat. According to the minutes of the meeting, Tusk replied that that money was not just for Greece but to support the entire eurozone. Erdogan said that a deal to constrain the refugees would support the Schengen visa-free travel agreement, another pan-European project.

The back-and-forth continued until Juncker pointedly recalled that the EU did Erdogan a favor the previous month. “Please note,” said Juncker, “that we postponed the progress report until after the Turkish elections, and we got criticized for this delay.” In other words, the EU delayed the release of a report highly critical of Turkey’s “progress” toward meeting EU standards of governance in order to help Erdogan’s Justice and Development Party win the general elections in November.

The revelation that the EU Commission is not above trying to influence Turkish elections appears in the minutes of the Erdogan-Tusk-Juncker meeting that took place on the sidelines of the G-20 summit in Antalya on Nov. 15-16. Scans of the minutes, apparently written by EU stenographers, were published last week on a little-known Greek website.

The exchange between Erdogan and the Tusk-Juncker team was fiery and occasionally insulting. At first, neither the EU Commission nor the Turkish government would confirm the minutes' authenticity, but neither did they dismiss them as a forgery. Days later, Erdogan said they were authentic. “Some try to attack us by [releasing] the minutes of these meetings,” Erdogan said in a speech to the Turkish Statistics Institute in Ankara on Feb. 11. “We defended the rights of our country and of Syrians.”

Al-Monitor asked the EU Commission in Brussels to respond to the charge of delaying the report for political reasons, providing an advance copy of the critical remarks in this column.

“We do not comment alleged leaks,” Commission spokeswoman Maja Kocijancic replied by email. “When it comes to the publication of annual reports — the date was chosen to given them the attention they deserve.”

But the fact is the EU progress reports on Turkey in the four previous years were all published in October.

The meeting is three months old now, but the minutes continue to be relevant because of what they reveal about EU and Turkish leaders.

Erdogan said the minutes were “not a source of shame but of absolution.” In places, he did argue Turkey’s case well. His point that Turkey’s handling of 2.5 million Syrian and Iraqi refugees was as valuable to Europe as the Greek bailout was most apt. That he interrupted Tusk to make the point shows quick thinking.

In complaining that the EU is stalling on Turkey’s accession negotiations, Erdogan asked Juncker to name “one delivery” that Brussels had made to Turkey recently. The minutes read: “Juncker notes that resources are being amassed, that there is readiness to move on accession, that visa liberalization will be sped up, while noting that these decisions are not easy for the EU to take.”

Juncker must have been wringing his hands.

Elsewhere, Erdogan does not come across well. He speaks of the refugees as if they were a commodity that could be dumped on Europe’s doorstep to embarrass it. Referring to Turkey’s European neighbors, he says, “We can open the doors to Greece and Bulgaria anytime, and we can put the refugees on buses.”

Tusk tells Erdogan that after the Paris attacks of Nov. 13, some EU member states wanted to abandon the Schengen system: “If we cannot show that we have a deal soon, things can turn dramatic, and we really want a deal with you.”

Erdogan replies, “So how will you deal with refugees if you don’t get a deal? Kill the refugees?” The Turkish president’s language suggests he is using the refugees as a stick to beat the Europeans with.

At one point in the argument over how much the EU will give Turkey for the refugees, the minutes record, “Erdogan said that Turkey didn’t need the EU’s money anyway.” For Erdogan, the argument over money seemed to be a matter of national pride.

But the biggest shame lies with Juncker and his declaration that the EU withheld a report in order to improve Erdogan’s chances in the Nov. 1 election. It is a cardinal principle of multinational organizations such as the UN and EU that they are politically neutral in any country’s affairs. The Turkish elections are to be decided by the Turkish people, without EU interference.

According to the minutes, Erdogan retorted that the delay of the progress report did not help his party win the election. This is true. The report — released nine days after the election — read that after several years of progress toward meeting EU standards of freedom and legislation, “serious backsliding was seen over the past two years.” It accused the government of inadequate measures against corruption, undermining the independence of the judiciary and intimidation of the media.

These are not issues that greatly concern the half of the electorate that potentially votes for Erdogan’s Justice and Development Party. These voters support Erdogan for what he has done to revitalize the economy, upgrade the Turkish underclass and, to a lesser extent, for his Islamic appeal. So one wonders how Juncker could have been so badly advised as to think by compromising EU neutrality he could influence the election and win favors from Erdogan. That the move was misguided and didn’t work does not detract from its immorality.

And there is contradiction here as well. One one hand, the EU issues reports that rebuke the Turkish government for human rights abuses. On the other, the EU seeks to maintain in power the political party that is responsible for those abuses.

Perhaps the best reply to the minutes was issued by the co-leaders of the pro-Kurdish People’s Democratic Party (HDP), the second biggest opposition party in parliament. Hours after Erdogan had confirmed the minutes’ veracity, Selahattin Demirtas and Figen Yuksekdag issued a public letter to Tusk, Juncker and German Chancellor Angela Merkel.

The HDP leaders said they had gained the impression that “the meetings you conduct with our government have evolved into a trade bargain” over issues such as refugees and human rights in Turkey. They hoped the reports of such bargaining were not authentic.

They concluded by urging the EU leadership to “protect democratic values and universal principles.”