Can Erdogan afford to scuttle the refugee deal with EU?

Although Erdogan still says EU cannot order Turkey around, he may well soften his bluster if he gets the presidency he wants. 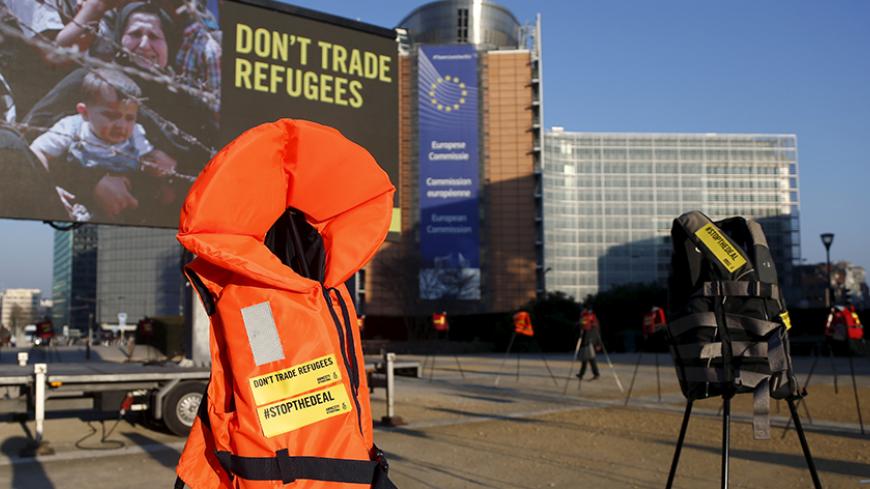 Life jackets are pictured in front of the European Commission headquarters during a protest to demand the European Council protect the human rights of the refugees within the EU-Turkey migration deal, ahead of an EU summit over migration in Brussels, March 17, 2016. - REUTERS/Francois Lenoir

Turkey’s ties with the European Union appeared to be set on a better course recently after having remained largely dormant over the past few years. This was not due, however, to a decision by Ankara to introduce the democratic reforms necessary for its membership bid in the EU. The refugee crisis forced Europe into cooperating with Ankara, even though Turkey’s democracy continues to deteriorate under President Recep Tayyip Erdogan.

The agreement signed in Brussels between Turkey and the EU on March 18 foresees the return to Turkey of all illegal migrants who have continued to cross into Greece since March 20. For every illegal migrant returned, Turkey will send a refugee to Europe through legal channels. Europe will also extend a total of 6 billion euros to Turkey by 2018 to cope with the refugee crisis.

The agreement also proposes that Turkey’s EU membership process be re-energized and that visa-free travel in Europe be granted for Turks by the end of June 2016, once Ankara has fulfilled 72 criteria set down for this purpose.

The visa issue, however, may turn out yet to be the barrier that the whole agreement founders on. The agreement was not widely welcomed in Europe anyway, where there were objections to it on humanitarian grounds, as many argued it overlooked the rights of refugees enshrined in international agreements.

Many in Europe also objected to Ankara being rewarded with this agreement despite undemocratic moves by the Turkish government, especially with regard to freedom of the press and freedom of expression.

The Turkish opposition also objected to the deal arguing that it entailed crass bartering at the expense of desperate refugees for the sake of political gains. It also argued that this agreement would turn Turkey into a camp for refugees who were sent back by Europe.

However, former Prime Minister Ahmet Davutoglu, who recently resigned, was joyous after the agreement was signed. “We today realized that Turkey and the EU have the same destiny, the same challenges and the same future,” he told reporters at a press conference with Donald Tusk, the president of the European Council, and Jean-Claude Juncker, the president of the European Commission.

Erdogan, however, was not very happy with the deal and appeared displeased with Davutoglu appearing in the limelight during negotiations. Many argue this also hastened Erdogan’s decision to replace Davutoglu with the more subservient former Transport Minister Binali Yildirim, who is now the prime minister.

Erdogan has also used every occasion since the agreement was signed to criticize it and swipe at the EU. He alleged at a meeting of the Turkish Union of Chambers and Bourses May 10 that the EU was toying with Ankara, especially over the money it promised to help meet the cost of nearly 3 million Syrian refugees in Turkey.

“So have they given the money yet? No!” Erdogan said. “They are only passing the ball around in the centerfield,” he added, using soccer imagery.

In a clear attempt to deflate Davutoglu’s initial enthusiasm with regards to the visa arrangement, Erdogan also said he did not understand why the target date for this, which was initially determined as the end of October 2016, had been brought forward to June.

“When they brought the date forward, they also attached 72 conditions. This is new,” Erdogan said, claiming that these conditions were with the hope of knowing Turkey could not fulfill them in such a short time.

He referred to one of the conditions, namely the demand that Turkey change its anti-terrorism law, as “disastrous.” The EU wants the scope of the law reduced so that people who merely express opinions cannot be investigated or tried on the grounds of aiding terrorism.

Erdogan said Turkey was not a country that could be ordered around in this way, defiantly adding that Ankara would refuse to comply with this demand. He nevertheless expressed his hope that the visa matter could be resolved by October.

“If it happens, then well. But if not, we have continued on our path to date without the visa and can continue in the same way,” Erdogan said.

European Parliament president Martin Schulz and Juncker have said that if all of the 72 conditions are not met there will be no visa waiver for Turks. "If Mr. Erdogan is pursuing a strategy of denying Turks the right to free travel to Europe, then he has to answer for this to the Turkish people. This is not my problem; this will be his problem," Juncker said May 12 during a conference in Berlin.

Barcin Yinanc, a veteran journalist and expert on Turkey’s foreign affairs, believes that Erdogan is unlikely to be swayed by such arguments.

“He saw during the November general election campaign that his anti–terrorism rhetoric, as well as his bashing of the West, is paying off,” Yinanc wrote in her column in Hurriyet Daily News.

Erdogan’s economic adviser, Yigit Bulut, said recently that if the EU continues with its current approach, then Ankara may suspend all of its agreements with it.

“They can maintain their double standards and continue to renege on their promises to Turkish citizens. But they should know that if this continues, Turkey will take some radical decisions soon,” Bulut said on the state broadcaster TRT.

Erdogan also believes that he has the upper hand because Europe needs Turkey’s support over the refugee crisis and in combating Islamic terrorism. The fact that illegal crossings from Turkey to Greece dropped sharply after the refugee agreement went into force has also strengthened his hand.

Various Turkish government officials have also warned that if the EU does not honor its end of the agreement on refugees, then Turkey will do the same. There have also been suggestions that Turkish officials will turn a blind eye to refugees crossing from Turkey to Greece in order to reduce its own refugee burden.

A European diplomat in Ankara who wished to remain anonymous due to his sensitive position believes this is “bluster.”

“If the agreement fails, Europe will make higher walls and the refugees will be stuck in Turkey,” he told Al-Monitor. “Turkey could end up in the end with no visa waiver and millions of refugees, which will hardly enhance Mr. Erdogan’s reputation,” he added.

The matter of the visa waiver has now effectively been delayed until October, which will enable the sides to continue cooperating on refugees. In the meantime, Erdogan has a busy agenda, hoping to have the constitution changed by October in order to legitimize his position as executive president.

Once he achieves that, he might soften his tone toward the EU because he also knows Turkey can’t afford to dump the refugee deal either, imperfect as it is. That at least is what European diplomats in Ankara appear to be hoping for.