Turkey’s ties with Europe have taken a turn for the worse as Turks accuse the European Union of deserting them after last month's coup attempt. 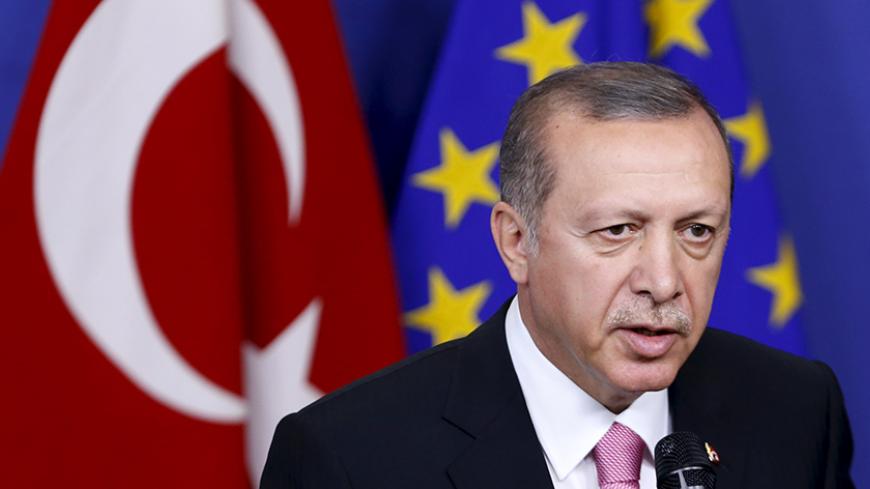 Turkey's President Recep Tayyip Erdogan talks to the media before a meeting with European Commission President Jean-Claude Juncker (not pictured) at the EU Commission headquarters in Brussels, Oct. 5, 2015. - REUTERS/Francois Lenoir

Turkey’s ties with Europe, already strained over a host of issues, are heading for a nosedive after the failed July 15 coup attempt against President Recep Tayyip Erdogan and the ruling Justice and Development Party (AKP). Most Turks feel Europe did not stand by Turkey in its hour of need, instead adopting a wait-and-see attitude as events unfolded.

That no European leader or senior European Union official rushed to Turkey after the failed attempt — to show solidarity against an attack on its democracy — has fueled a belief among Turks that Europe is steeped in double standards when Turkey is concerned. Also reinforcing negative sentiments toward Europe are European criticism of the massive purge against suspected followers and sympathizers of Fethullah Gulen, the Turkish cleric living in the United States and alleged mastermind behind the coup attempt, and warnings that reinstating the death penalty to punish coup plotters would end Ankara’s hopes of joining the EU.

Erdogan has not minced words in this regard. “There is not one person from the EU or the Council of Europe who came here to offer condolences. But they feel no shame or discomfort in telling us these humiliating things,” he told a rally of supporters in Ankara July 29. “I say to them: Keep that wisdom to yourself.”

Thorbjorn Jagland, the secretary-general of the Council of Europe, of which Turkey is a member, felt compelled to visit Turkey, on Aug. 3, after Erdogan's remarks. Aware of the angry mood in Ankara, Jagland underlined his position regarding the coup attempt.

Following a meeting with parliament Speaker Ismail Kahraman, Jagland said, “I was the first to condemn this coup attempt. Before midnight and before it was clear to whose advantage it would end, I felt, based on my democratic instincts, that I had to condemn it and did.”

Some other European politicians also criticized Europe’s apparent reticence, among them Carl Bildt, the former prime minister and foreign minister of Sweden. “The EU would be in a far better position today if EU leaders had gone to Turkey immediately to express their horror at the coup, congratulate the people of Turkey for defeating it,” Bildt wrote for Politico. “Of course, there is no guarantee this would have prevented the country from sliding further toward authoritarianism. But Europe could at least have tried to stand up for its political ideal and democratic values.”

Turks thrive on conspiracy theories, and according to one currently circulating, Europe would have been happy to see the coup succeed, because it would have killed two birds with one stone: It would have overthrown an Islamist president and government despised in the West, and it would have automatically ended Turkey’s EU membership bid, which many in Europe oppose.

Ibrahim Kalin, Erdogan’s chief adviser, expressed this view after the coup attempt was foiled. “Had the coup succeeded, you would have supported it, like in Egypt. You don't know this nation but they know you,” Kalin wrote in a tweet aimed at Europe.

Yusuf Muftuoglu, an adviser to former President Abdullah Gul, also argued that anger toward Erdogan had prevented the West from taking a principled stance against the coup attempt. He wrote for the Huffington Post, “Today, largely as a result of this Western indifference toward the coup and its culprits and the much greater amount of attention paid to other events, many people in Turkey, including commentators who have nothing to do with conspiracy theories, believe that people in the West would have been content if this coup had succeeded.”

All of this is a far cry from just a few months ago, when former Prime Minister Ahmet Davutoglu jubilantly announced a “new era in Turkey’s ties with Europe,” after the two sides concluded a controversial deal on refugees in March. Various developments since then have reignited feelings among Turks of again having been stabbed in the back by Europe.

First there was the demeaning manner in which Turkey’s prospective EU membership was used as a political scarecrow during the Brexit campaign, even though London has always presented itself as a supporter of Ankara’s EU bid. Then came what Turks believe is an attempt by the EU to renege on its promise of visa-free travel for Turks, included in the refugee deal. The EU wants Ankara to soften its Anti-Terrorism Law for this to happen, but Turkey is refusing to do so.

Erdogan is now threatening to renege on the refugee deal if the visa provision is not honored. EU officials admit that Ankara has been honoring its end of the bargain and are now concerned about the fate of the agreement.

There was also the Armenian genocide resolution adopted by the German Bundestag in June, considered the ultimate betrayal by Turks. Capping off all the above are the negative feelings generated after the failed coup attempt. Threats from Europe that Turkey’s EU membership bid could be suspended nevertheless ring hollow for Turks, because the talks were going nowhere anyway.

Factors including economic problems, the rise of Islamophobia in Europe and the racism that surfaced during the Brexit campaign had already diminished the EU’s appeal for most Turks. Yigit Bulut, Erdogan’s economic adviser, believes the time has come for Turkey to dump the EU.

“I have been writing for years, almost shouting, that the EU will collapse, and it is collapsing,” Bulut wrote in his column for the pro-government daily Star. Claiming that Europe has contributed nothing to Turkey, Bulut said he would not be telling the truth if he said he was saddened by Europe’s decline.

“The correct course for Turkey is to separate itself from ‘Europe the sick man’ and to avoid becoming part of its bad fate,” Bulut continued. He concluded, “A new world is being built, and Turkey is one of the countries with the greatest potential in this regard.”

Some European officials and politicians, however, believe that ending Turkey’s EU bid would be counterproductive. Responding to Austria’s call to halt the membership talks, European Commission President Jean-Claude Juncker told the German ARD channel that it would not be helpful. He also underlined that there was no unanimity within the EU for pursuing such a move.

There are also Turkish voices that argue that turning its back on the West would be to Turkey’s detriment. Taha Akyol, a veteran columnist for the daily Hurriyet, believes Turkey’s place is ultimately with the West.

“The West is our greatest partner in terms of the technology we use, our know-how, our academic knowledge and our trade and investment. The share of Russia and Asia in this is considerably smaller,” Akyol argued.

Akyol said the past 150 years have proven that this is the best orientation for Turkey, which he said should subscribe to European values and take its place in European organizations.

A fact that Europe must face is that Erdogan is now an even greater force to contend with after the failed coup. The future of ties will depend on whether he and Europe can overcome their mutual antipathy for the sake of big picture considerations. Given the present mood on both sides, it appears this will not be an easy task.