Erdogan uses refugee issue for his own benefit in EU

EU leaders' focus during Erdogan’s visit to Brussels was on stemming the flow of Syrian refugees, not on his authoritarian and undemocratic ways. 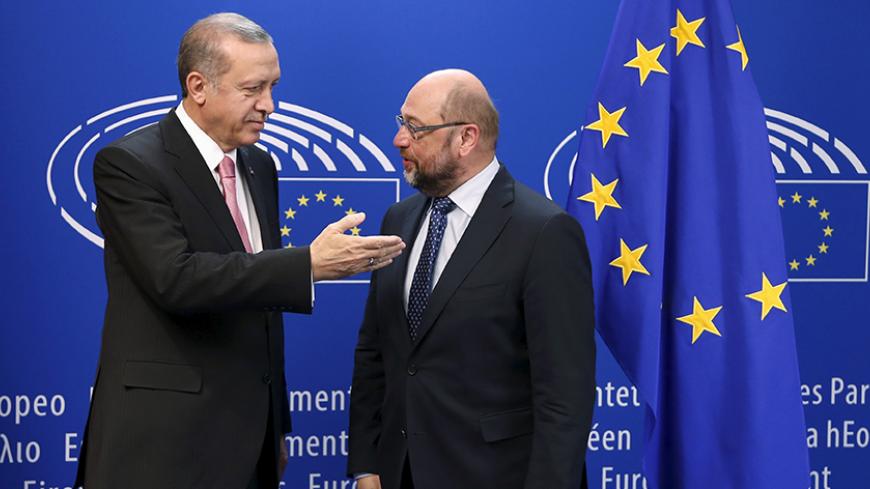 Syrian refugees streaming into Europe, the need to combat the Islamic State (IS) and the uncertainties set in motion by Russia’s military intervention in Syria have increased President Recep Tayyip Erdogan’s value to European leaders.

This became apparent during Erdogan’s state visit to Brussels Oct. 4-6 at the invitation of Belgian King Philippe. During the visit, Erdogan also spoke with the presidents of the European Council, European Commission and European Parliament, who had Syria high on the agenda.

Erdogan’s visit took place against the backdrop of stalled negotiations in Turkey’s bid for EU membership due to some member states’ opposition to having a predominantly Muslim country in the union. Turkey's foot-dragging on democratic reforms and backpedaling under Erdogan’s watch on some reforms introduced in the past have also put Ankara’s EU bid in the doldrums.

Criticism by EU leaders of Erdogan’s authoritarian and undemocratic ways was nevertheless muted during his Brussels visit, because the main effort on the EU side was to entice Turkey to help alleviate Europe’s refugee crisis.

EU officials have made it no secret that they want Syrian refugees to stay in Turkey and to be accommodated there with some EU help. Erdogan, however, appeared to have the upper hand in Brussels, which also enabled him to practice his penchant for finger wagging at Europe over Syria.

In his various remarks in Brussels, Erdogan highlighted the fact that Europe’s refugee crisis is nothing compared with that of Turkey’s. Turkey has taken in more than 2 million Syrians so far with little outside help.

While in Brussels, Erdogan also tried to convince EU leaders that the Kurdish nationalist Democratic Union Party (PYD) in Syria is affiliated with the outlawed Kurdistan Workers Party (PKK) and, therefore, should be listed as a terrorist organization. The PYD is currently allied with the West in the US-led fight against IS. Diplomats say the West is unlikely to abandon the Syrian Kurdish group in the absence of any other viable force on the ground fighting IS with Western air support.

The Financial Times cited an undisclosed senior European diplomat whose remarks seemed to sum up the prevailing mood in Brussels, where there is clearly little love lost for Erdogan due to his generally abrasive manner toward the West and his undermining of democracy in Turkey.

“We’re embracing a government we really don’t like at all. We have to bring down this flow of migrants. It has become realpolitik; we’re leaving aside our worries about domestic politics,” the diplomat was quoted saying.

Similar assessments came from analysts before Erdogan arrived in Brussels.

“Facing an unprecedented migrant influx, a rising threat from Islamic State terrorists, and unchecked Russian military intervention in Syria, Europe needs Erdogan like never before,” wrote Simon Tisdall, a foreign affairs columnist for The Guardian and a seasoned Turkey expert.

Various European media outlets reported before Erdogan’s visit Oct. 5 that the enticements to be dangled under his nose would include 250 million euros ($282 million) in extra EU funding, topped by money from individual member states, to keep the Syrian refugees in Turkey.

European governments say they will take in around half a million migrants from Syria over time, but EU officials have made it clear they want Turkey to keep the refugees for now and process them before eventually sending them on to Europe.

Turkish officials remain unimpressed by what the EU is proposing, given the billions of dollars Ankara has already spent looking after the refugees. Turkish sources who briefed reporters after Erdogan’s talks with Juncker said the European Commission president had been told that Ankara had spent nearly $8 billion to date on the Syrians.

They added that Erdogan had expressed his pleasure over some recent EU decision with regard to the refugees, but underlined that Europe had to shoulder much more responsibility in sharing Turkey’s burden.

A Turkish official, who wished to remain anonymous due to his sensitive position in the government, explained to Al-Monitor why Ankara is unmoved by what the EU is offering.

“Europe is looking on the matter as a migration and integration problem, and trying to work out the mathematics according to these measures and a certain time frame. The issue, however, is an ongoing humanitarian one that needs to be addressed immediately,” the official said.

Another enticement Turkey expected was a promise by the EU to accelerate visa reforms for Turks. This is a particularly sore point for Ankara given that the visa requirement for Turks is unprecedented for a country that is a candidate for EU membership. Given past stalling on this score by the EU, few expected a major breakthrough to be announced during Erdogan’s visit. Juncker said before meeting Erdogan that he endorses speeding up the visa reform, but many in Europe do not.

Another topic on which little progress was expected was Ankara’s call for a no-fly zone and a safe zone in northern Syria adjoining the Turkish border. The idea has been a nonstarter for a number of reasons, the main one being that no Western country is interested in providing the ground forces that would protect this zone.

Tusk was a little more forthcoming in this regard. “The European Union is ready to take up all issues with Turkey, so we can also discuss a possible buffer zone in Syria,” he told reporters after his talks with Erdogan. His diplomatic remarks came across, however, as an attempt to mollify Erdogan, rather than signaling European support on the score.

Erdogan’s appeal to EU leaders to list the PYD as a terrorist organization like the PKK also appeared to fall on deaf ears, given the close and developing military cooperation between the PYD and the US-led anti-IS coalition.

Erdogan’s call on the EU to re-energize Turkey’s membership talks, on the other hand, was taken generally to be no more than pro forma, given that he was talking with EU leaders. Erdogan called for blocked chapters in these negotiations to be opened, but there was little indicating that he would be returning from Brussels with anything new in this regard.

Equally pro forma was the muted criticism of the state of democracy and press freedoms in Turkey by EU leaders.

“It should be no surprise to you reporters that I put the topic of media freedoms on the top of my list when talking to Erdogan,” Schulz told reporters after meeting with Erdogan. He added that many European parliamentarians had concerns in this regard that Turkey must take seriously. The European Parliament president’s remarks did not reflect any urgency, though, and were clearly more restrained than would have been the case otherwise.

It is doubtful that Erdogan’s visit to Brussels will be remembered for advancing Ankara’s membership bid. As well, few game-changing results are expected to emanate from the visit concerning Turkey and the EU’s expectations from each other regarding Syria.

The visit, nevertheless, served Erdogan’s interests at home, coming close to general elections that will determine his political future. Erdogan will use the red-carpet welcome he got from the Belgian king, as well as the deference of EU leaders toward him, to counter charges by his domestic critics that he has left Turkey friendless in the world.

Not everything went his way in Brussels, though. The mayor of Brussels refused to allow him to use the 18,000-seat Palais 12 arena where Erdogan had intended to address his Turkish supporters in Belgium who have the right to vote in Turkey’s general elections Nov. 1.

“Palais 12 can only be used for concerts and entertainment, not for political events,” Fabrice Voogt, the mayor’s spokesman, told the press.

Erdogan had to address a smaller crowd outside his hotel, from the roof of a double-decker tourist bus, but the whole issue was a moot one for him. He appears happy enough in seeing EU leaders bend over backward to recruit his assistance as they scramble to cope with their Syrian refugee crisis.