Turkish President Recep Tayyip Erdogan tried to use his Brussels visit to enhance his own domestic political clout, but the Europeans were not very keen on helping him. 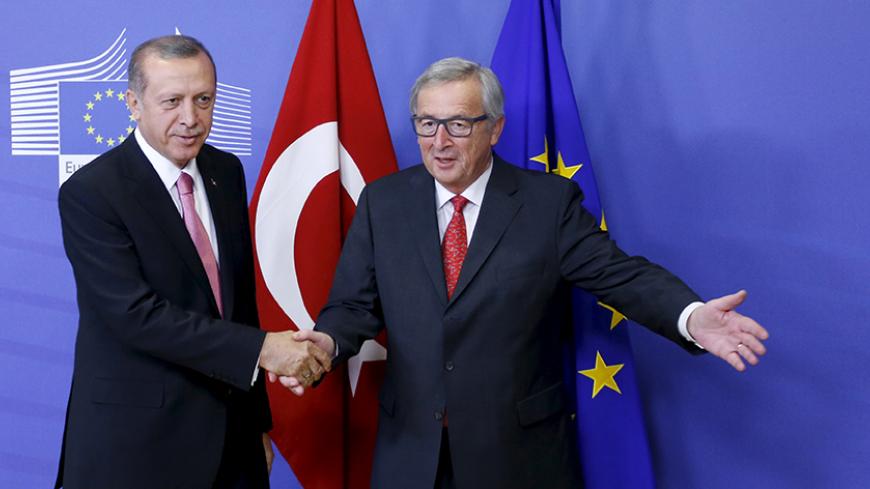 These hopes contrasted with the feelings of the pro-democracy and to a large measure pro-EU circles that have become wary of Erdogan’s increasingly authoritarian tendencies. Many of them have a sense that the Europeans have betrayed them.

In the wake of Erdogan’s visit to Brussels, it seems that both sides were off the mark. The talks with the highest EU officials did not alter the prevailing malaise between the EU and Turkey and did little for Erdogan in the runup to Turkey’s elections. Any step that Erdogan takes in terms of domestic politics or in the domain of foreign policy has more to do with the elections than anything else.

The misleading assessments on his talks with the EU officials began with the press coverage prior to the visit. A Guardian article published the first day of his Brussels visit read, “Facing an escalating migrant crisis and threat from [the Islamic State], Brussels is desperate for the cooperation of Turkey’s president.” It went on, “But as he headed for Brussels on Sunday for two days of talks, his first visit since he abruptly canceled a 2011 trip, EU leaders are painfully aware the tables have turned.

"Facing an unprecedented migrant influx, a rising threat from Islamic State (IS) terrorists and unchecked Russian military intervention in Syria, Europe needs Erdogan like never before.”

Another influential British daily, The Financial Times, reported, “EU woos Erdogan in effort to stem migration,” claiming “sweeteners may be offered in return for agreement.” The article also quoted a European leader as saying, “We’re embracing a government we really don’t like at all.”

The Wall Street Journal quoted Hungarian Prime Minister Viktor Urban, who is known for his admiration for Erdogan and built a reputation on his staunch rejection of Syrian refugees in the EU zone. The article read, “Hungarian Prime Minister Viktor Orban on Tuesday expressed skepticism that Europe has any other solution than to rely on Mr. Erdogan to stem the tide. ‘I think now the hope of the European leaders is in Erdogan,’ Mr. Orban said in an interview with newspaper. ‘We have to pray every Sunday for the House of Erdogan.’”

Despite all these signals, Erdogan’s talks in Brussels did not produce the results predicted or implied in the Western media reports. On Oct. 6, the EU Commission published the “Draft Action Plan” for refugee and migration management issues while Erdogan was in session with Juncker. It added, uncharacteristically: "Version handed over on 5 October 2015 by European Commission President Juncker to the President of the Republic of Turkey Erdogan."

My source in Brussels who is privy to the substance of the talks between Erdogan and three presidents of the EU institutions told me that the timing of the text and emphasis on the word “draft” signal that the sides did not agree on it. Both Erdogan and the EU need each other, but their positions remain far apart and it is not easy to bridge them.

Erdogan’s trip to Brussels was planned a year ago as a state visit to Belgium to coincide with the inauguration of “Europalia Turkey,” a cultural festival. At the time, Turkey was keen to undermine an expected international campaign upon the centenary of the alleged Armenian genocide.

The reason for the visit was to promote Turkey’s image in the West and now, naturally, it has transformed itself in advance of Nov. 1 snap elections to enhance Erdogan’s electoral clout.

The Europeans were not very eager to help to him in this regard. The war in Syria and asylum seekers in Europe added another dimension to the visit and the Turkish presidency did everything to make the EU see things from Erdogan's perspective.

True to his diplomatic style, he would not bargain on the asylum seekers issue that is paralyzing EU decision-makers independently of the overall Syrian situation. He had intended to make use of EU panic over the issue to his benefit in enlisting Western support for his position on Syria.

However, the EU leaders consider the concept of safe and no-fly zones to already be wiped out by Russian intervention. For them, it was never a concept they had entertained, and the latest escalation of the crisis has made it a nonstarter.

Erdogan pressed the Europeans to endorse his priority in fighting terrorism: the insurgent Kurdistan Workers Party (PKK). Although the EU agrees by definition that the PKK is a terrorist organization, it does not extend this definition to the Democratic Union Party (PYD) and People's Protection Units (YPG) in Syria, which they see the most efficient buffer against IS.

For Erdogan and other Turkish authorities around him, the PYD and YPG are the Syrian extension of the PKK and must be treated as a terrorist threat as well. Even if affiliations between the PKK and the PYD and YPG are an undeniable fact, as long as the two do not formally appear in the list of terrorist organizations and as long as they are formidable fighting forces on the ground against IS, the positions of Erdogan and the EU will remain irreconcilable.

The EU leaders are clearly unwilling to be seen as promoting Erdogan on the eve of Turkey’s elections and as partners in his electoral tactics.

The gap between the EU and Erdogan is too wide to close in just one Brussels visit when both sides met under the pressure of the Syrian asylum seekers.

On that issue, technical talks are now taking place on how to cooperate, as the “draft action plan” indicates. Yet, no real meeting of minds is apparent even on this issue.

For his electoral purposes, Erdogan perhaps found the unreliable West as unreliable as ever. And the West, perhaps, found that despite mutual interests, Erdogan is not the best partner available in Turkey.