Is the EU really ready to commit to Turkey?

Turkish President Recep Tayyip Erdogan is feeling his oats as he renegotiates his deal with the European Union. 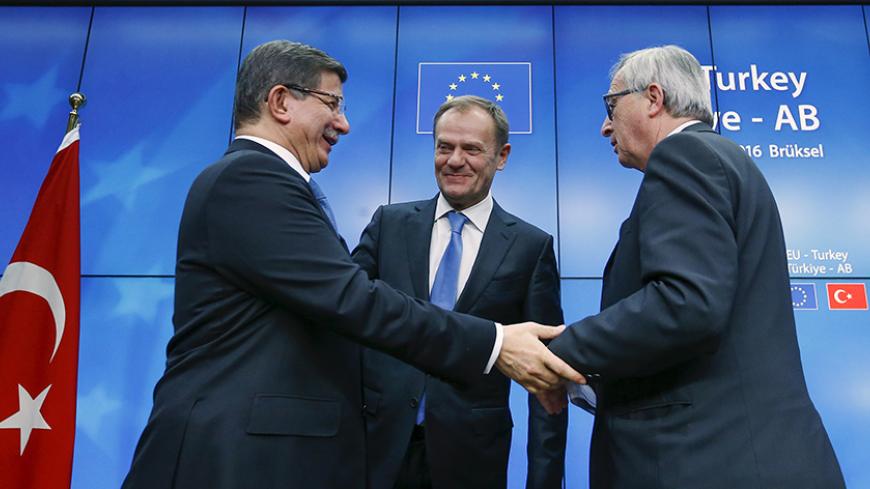 The longstanding relationship between Turkey and the European Union has been turned on its head. At least for now, Turkey appears to hold the power.

For a long time, Turkey seemed desperate in its courtship of the EU, while the latter was happy to keep its distance, reluctant to commit to the largely Muslim nation. Now, believing it faces an existential threat from the flow of Syrian war refugees, the EU seems eager to please.

Turkish President Recep Tayyip Erdogan — who is increasingly displaying authoritarian, even dictatorial, tendencies — was quick to grasp that the EU is no longer dealing from a position of strength. Erdogan feels, perhaps not wrongly, the time has come when Europe needs Turkey more than Turkey needs Europe.

German Chancellor Angela Merkel is spearheading the efforts of a desperate Europe to stem the flow of refugees. Erdogan and Merkel are odd partners, but not only did she rush to Turkey to be seated in gilded chairs, she picked European Commission President Jean-Claude Juncker of Luxembourg for the job of appeasing Erdogan. European Council President Donald Tusk of Poland is also on board, eager to get a deal from Turkey.

Merkel hails the tentative deal between Ankara and Brussels as a breakthrough. Yet the EU is suffering in disarray while it awaits the final decision, which is expected at the EU summit scheduled for March 17-18.

A March 7 column by Simon Tisdall of British daily The Guardian spoke about a deal with the devil. It was one among the flood of critical pieces that appeared in the Western press. He writes, “Europe’s Faustian pact with Recep Tayyip Erdogan to curtail migration into the EU may carry a devilishly high price tag. Turkey’s authoritarian president has proved an unreliable and problematic partner since the Syrian crisis erupted five years ago. But the EU’s urgent need for his help currently outweighs its deep misgivings. As Faust discovered, the reckoning comes later.”

He concluded, “The Turkey-Russia rupture has not been repaired. Erdogan, a master of the political and personal grievance, does not bury the hatchet easily, if at all. He rarely admits mistakes. And he can quickly fly off the handle. All of which makes him a highly unpredictable partner for a desperate EU.”

Turkey was already being driven closer to the West by its deteriorating relationship with Russia.

Historically and geopolitically, it has always been so. Ottoman Turkey’s attempts at Westernization began following the Kucuk Kaynarca Treaty of 1774, which sealed the loss of the Crimean Peninsula to a resurgent Russia to its north. Ottoman Turkey fought shoulder to shoulder with Great Britain and France against Russia in the bloody Crimean War in 1856.

Turkey’s accession to NATO in 1952, in the wake of World War II, was the result of Stalin’s Soviet Union bullying Turkey.

Since November 2015, Russia has not only been Turkey’s belligerent northern neighbor, it's been on Turkey's southern doorstep. Russia seeks to keep Turkey from extending its influence, particularly with regard to Aleppo, the so-called bastion of Turkey-Saudi-Qatari-Syrian opposition to Syrian President Bashar al-Assad's regime. Assad is boosted by Russian military assistance and an alliance with Iran.

Russia, as seen from Ankara, is supporting the Kurdish nationalist Democratic Union Party (PYD), which opened an office in Moscow recently, and its armed wing, the People's Protection Units (YPG), in controlling a vast area in northern Syria adjacent to Turkey’s long frontier.

Ankara trumpets that the PYD and YPG are identical with the Kurdistan Workers Party (PKK) and thus are terrorist organizations detrimental to Turkey’s security. Turkey considers Russia's support to Syrian Kurds and their aim of self-rule, and implicitly Russia's support of the PKK, to be a major existential threat.

A tacit Russia-Iran axis operating in Syria and the Russian military umbrella over Armenia make Turks feel that they are surrounded by Russia and its allies. And Ankara is feeling a growing sense of isolation.

Turkey needs a new rapprochement with the West and particularly with the EU because of the new balance of power in and around Syria, which reflects the dangerously increasing hostility between Ankara and Moscow.

Turkish Prime Minister Ahmet Davutoglu's surprise visit to Tehran only 24 hours ahead of his scheduled visit to Brussels for the EU-Turkey summit wasn't a coincidence and must be seen within this new strategic and geopolitical framework.

In Tehran, Davutoglu tried to play up the neighboring countries' mutual interest in the Kurdish issue. They had signed the Saadabad Pact in 1937 to seal their mutual agreement to assist each other in suppressing the Kurdish national aspirations.

His trip wasn't just a repeat of history, it was a diplomatic inquiry seeking a crack in the Moscow-Tehran relationship.

Only a day after, Davutoglu was sitting with EU leaders and presenting them with new and surprising proposals he had brought for them.

Merkel, speaking with Davutoglu after the summit, stressed that, given the war in Syria and the “geostrategic” situation, a deal with Turkey is “absolutely in Europe’s interest.”

Convincing the rest of Europe might not be so easy.

Any rapprochement with the EU is in Turkey’s interest. Yet at this very critical juncture, it is even more in Erdogan’s interest. More and more, this situation looks like a lifeline for Erdogan’s increasingly authoritarian one-man rule, which hardly reflects the EU’s values and principles.

That is the major weakness of the potential EU-Turkey deal. Even if it materializes at the EU summit, it may not be sustainable. If Europe later remembers its values, the deal will not survive.