Turkish-EU ties in throes of a slow death

The EU’s demand for a revision of Turkey’s anti-terrorism law as a precondition for allowing Turks visa-free travel in Europe has turned into the Achilles’ heel of ties between Ankara and Brussels. 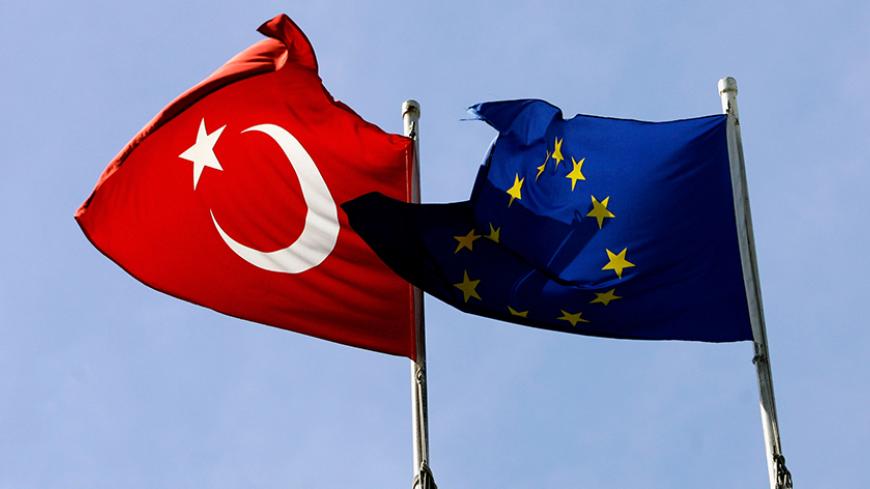 The Turkish and EU flags are seen in Istanbul, Oct. 8, 2005. - Friedemann Vogel/Getty Images

Ankara’s bid for European Union membership used to underlie Turkey’s appeal for many of the Middle East’s progressive elements in the past. The Arab Spring enhanced Turkey’s importance as a “model country” for other Islamic countries. With the Arab Spring gone sour and the EU battling its own crises, while Turkey becomes more authoritarian under President Recep Tayyip Erdogan, these hopes have all but faded.

It was a negative issue, the refugee crises, which appeared momentarily to inject fresh life into ties between Ankara and Brussels recently. Following the highly controversial migrant agreement concluded by the sides in March, then-Prime Minister Ahmet Davutoglu announced “a new era” in relations with Europe.

“Today we realized that Turkey and the EU have the same destiny, the same challenges and the same future," he said over-optimistically.

Davutoglu also came back from Brussels with a “bonus” he hoped would mollify domestic critics of the migrant agreement; these critics said the pact would turn Turkey into Europe’s refugee camp.

Turks would be given the privilege of visa-free travel to Europe by the end of June, provided Ankara met 72 criteria for this.

Erdogan has since fired Davutoglu, and the general impression is not one of deeper engagement between Turkey and the EU, but what appears to be a continuing process of disengagement.

Ironically, it is the “bonus” Davutoglu brought from Brussels in March that has become the Achilles’ heel in this respect. It is clear that Turks will not gain the right of free travel in Europe by the end of June. That has been already deferred to October and many doubt it will happen then.

At issue is Turkey’s refusal to fulfill a specific EU demand, even though Ankara has met most of the 72 criteria required. Turkey is being called on to change its anti-terrorism law so that journalists, academics, activists and ordinary citizens are not charged under it for merely expressing their views — something that is happening with increasing frequency.

Ankara is currently embroiled in a bloody war against the outlawed Kurdistan Workers Party (PKK), which the United States and the EU have also designated as a terrorist group. Erdogan, who is clearly displeased with the way Davutoglu negotiated the migrant deal, reacted to the EU demand with his familiar abrasive manner.

Early in May he made it clear that Ankara would not comply with the deal, indicating that if the EU is not pleased with that, it can go its way while Turkey goes its. In a separate address in May, he said, “Asking for the definition of terrorism to change is to call for a stop to fighting terrorism. This amounts to supporting terrorism.”

Erdogan also recalled that PKK supporters were allowed by Belgium to open a publicity tent outside the European Commission building in Brussels in March, while Davutoglu was negotiating the migrant deal inside.

“They give them euros and tell them to go and divide Turkey. They give them weapons. Do they think we don’t know all of this?” he said angrily.

Prime Minister Binali Yildirim, who replaced Davutoglu in May, also indicated recently that Turkey would forgo the visa privilege for the sake of fighting terrorism. In an address to his parliamentary group, Yildirim said the EU’s demand regarding Turkey’s anti-terrorism law was “unfriendly,” adding that Ankara would never bow to this.

“Even if it is the visa waiver that is in question, this will not happen. Let [that waiver] stay where it is,” Yildirim said defiantly.

Turkish government officials have also suggested that Ankara will refuse to fulfill its obligations under the migrant agreement if the visa waiver does not go through as promised.

Already under intense criticism for allegedly caving into “Turkish blackmail” with the migrant agreement, top EU officials are adamant with regard to their demand, despite concerns that this might undermine the migrant deal.

Regardless of the controversy surrounding it, this agreement — which is being silently implemented even though the Turkish parliament has not ratified it yet — has reduced the number of illegal crossings to Greece from Turkey.

Analysts argue, however, that Turkey can’t afford to scuttle the migrant deal over the visa issue because the refugee crises and the related threat from Islamic terrorism cut both ways. The fact that the final decision on the visa issue has been deferred to October buys time for the sides to try to overcome the impasse.

The current state of affairs also vindicates those who argued that it was a fatal mistake to lump the refugee question with Turkey’s EU bid, and the visa issue. The result, they point out, has left Turkish-EU ties in a worse state.

Retired Ambassador Osman Koruturk, whose past posts included Paris and Berlin, says that using refugees to advance unrelated political needs was unethical on the part of both sides to start with.

“Both sides acted dishonestly with regard to their promises, so it was not hard to see then that the whole business would have negative results for Turkish-EU ties,” Koruturk, who is currently a deputy from the main opposition Republican People's Party, told Al-Monitor.

He recalled that German Chancellor Angela Merkel had started the campaign against Turkey’s EU membership while he was ambassador in Berlin and she was then in the opposition; Koruturk indicated that it was less than honorable for her to give the impression now that she was supporting this bid purely for the sake of the migrant deal.

The negative results of this deal were also seen in the UK’s Brexit campaign. Anti-EU campaigners used the visa question to argue that Turkey will eventually be given "free EU membership” even if it doesn’t fulfill the democratic prerequisites for this, and flood Britain with Turks.

Opinion polls show that most Turks believe that the EU will never admit Turkey as a member. This also makes Erdogan’s life easier, enabling him to continually lambaste Europe for its “perfidy.”

Koruturk also believes that the current situation plays into Erdogan’s hands. “When he said Turkey would go its own way if the EU insists on its demands, he was probably expressing his true desire,” Koruturk said. “He considers the West to be degenerate and believes its values are not suitable for Turkey.”

Erdogan’s continuing railings against Europe seem to confirm this assessment.

Meanwhile, the recent resignation of Hansjoerg Haber, the EU’s ambassador to Ankara — for “reasons to do with Turkey,” according to EU officials — also shows where Turkish-EU ties stand.

Given this general situation, the impression that these ties are in the throes of a slow death appears unavoidable.