Turkey-EU clash is now just a matter of time

Turkish President Recep Tayyip Erdogan has issued a series of warnings that Turkey will stop taking refugees back from the European Union if it fails to waive visa restrictions for Turks, signaling the two sides are on a collision course. 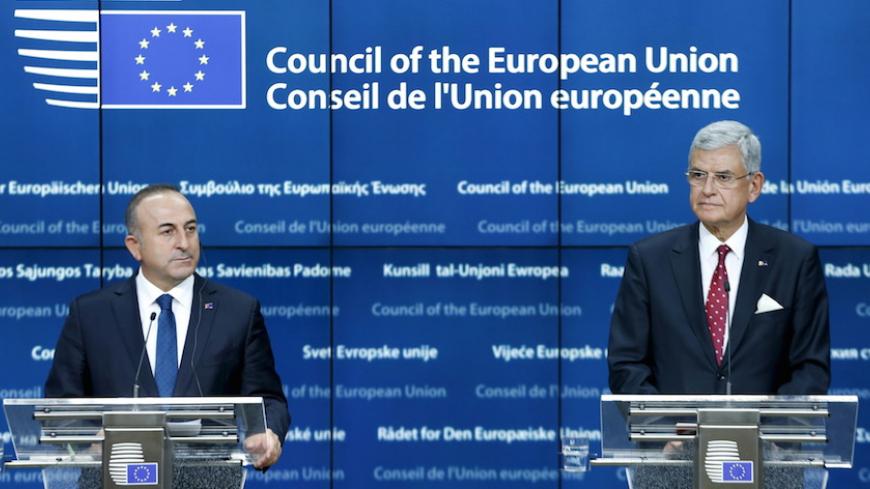 President Recep Tayyip Erdogan’s warnings that Turkey’s refugee deal with the European Union will collapse if it fails to waive visa restrictions for Turks have become more frequent, almost routine in recent days, signaling a looming and serious crisis in Turkish-EU ties.

The emergency rule Erdogan declared after surviving the failed July 15 coup has meant the suspension of a series of basic rights and freedoms in Turkey, making the planned visa waiver even more difficult and hastening the course toward collision. The row was aggravated by a psychological factor as Erdogan feels anger and mistrust toward EU leaders who, according to him, failed to extend him adequate support after the putsch.

Since the beginning of August, Erdogan has grown markedly tougher on the issue, warning every five days on average that Turkey will stop readmitting refugees if the EU fails to introduce visa-free travel for Turks, with the Turkish press calling his warnings a “showdown.”

In his most recent challenge Aug. 12, Erdogan told Germany’s RTL television, “The visa liberalization and readmission are very important. The process is currently ongoing. Unfortunately, Europe has failed to keep its promise on the issue. We want to take steps simultaneously. If [the visa waiver] happens, fine. If not, I’m sorry but we’ll stop the readmissions.” He had made similar remarks on Aug. 2 and Aug. 8 as well.

Erdogan’s warnings are based on the March 18 deal between Turkey and the EU, under which Ankara pledged to take back all refugees who cross illegally from Turkey to Greece after March 20. Visa-free travel for Turkish nationals was part of the agreement — hence the reciprocity link Erdogan draws between the two. The introduction of the visa waiver was slated for June, but that target was missed, and all signs now indicate it is not forthcoming anytime this year.

Originally, the EU had planned to lift visa requirements for Turks in October 2016 if everything went smoothly under a visa liberalization agreement the two sides signed on Dec. 16, 2013, more than two years before the refugee deal. The plan was brought forward to June and incorporated into the refugee deal as a result of personal efforts by Turkey’s then-Prime Minister Ahmet Davutoglu. The EU agreed because the new timing changed nothing about the 72 criteria Turkey was supposed to fulfill for the visa waiver, something that Ankara was perfectly aware of.

So far, Turkey has met 67 of the said criteria. Erdogan is reluctant to fulfill the remaining five, but wants the visa waiver to go ahead all the same — a demand that lies at the core of the dispute. The most important part of the homework Ankara refuses to do requires amendments in Turkey’s anti-terror law in line with EU norms. The EU’s objective here is pretty clear: to strip Turkish security and judicial authorities of a legal framework that allows for violations of basic rights and freedoms and thus make sure that visa-free travel does not encourage victimized Turks to seek political asylum in EU countries. So, the EU’s rationale is to protect itself against a possible new wave of migration, facilitated by visa-free travel while oppressive and restrictive laws remain in place.

Of note, two of the four other criteria at which Erdogan balks require legal amendments to align with EU norms on fighting corruption and the protection of personal data.

It’s worth recalling, however, that Erdogan’s threats to abolish the refugee deal did not begin after the July 15 putsch. The 2013 agreement, with all its 72 conditions, had been signed in Erdogan’s presence in Ankara, yet in May he was able to say, “They have put forward 72 points, saying we should do this and that. This story is something new. These [conditions] didn’t exist before. Where did they come from?”

In the days before the putsch, Erdogan’s pretext for rejecting the five outstanding criteria was the all-out war Ankara had launched on the Kurdistan Workers Party (PKK) in July 2015. He argued that amending anti-terror laws while the fight against the PKK was in full swing would play into the hands of the militants. Now, he has an even stronger reason to dig in his heels: to sustain unhindered the massive, merciless purges and clampdowns targeting the Gulen community — officially branded by Turkey the Fethullah Gulen Terror Organization — whose military network has emerged as the planner and perpetrator of the putsch.

Under the state of emergency, Turkey has become a country run through legislative decrees exempt from constitutional checks, with freedoms further suppressed and the European Convention on Human Rights put on hold. Thus, it has drifted further away from the EU and can in no way be expected to fulfill the pending conditions for a visa waiver.

Meanwhile, tens of thousands of people have landed in police custody or in jail, lost their jobs and seen their properties confiscated as the draconian onslaught on Gulenists rages both at state institutions and public life in general, threatening an exodus of political refugees to Europe.

In sum, the post-putsch conditions have reinforced the EU’s reasons to maintain the visa restrictions, while Erdogan has become tougher in demanding their removal. As long as these conditions prevail, the eruption of a severe crisis between Turkey and the EU is only a matter of time.