Why is Erdogan threatening showdown on EU visa waiver?

The EU's visa waiver promise to Ankara concerns a relatively small number of Turks who have little sway on Erdogan's political aspirations. 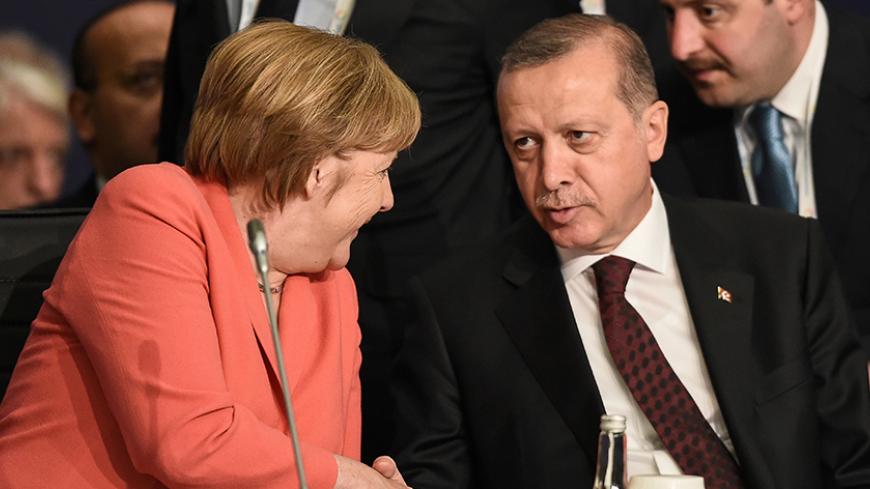 ANKARA, Turkey — Soon after he forced Prime Minister Ahmet Davutoglu to quit last month, President Recep Tayyip Erdogan turned up rhetoric against the European Union, bringing relations to the brink of rupture. Having worked hard to warm ties with the EU, Davutoglu stepped down just as the European Commissionr recommended the introduction of a visa-free travel regime for Turkish nationals, provided that Ankara fulfilled five outstanding criteria.

Erdogan lashed out at the EU for a condition requiring Turkey to amend its anti-terror law, describing it as an unfair fiat at a time when the country is facing serious terrorist threats. “They say, ‘I am going to abolish visas and this is the condition.’ I'm sorry, we're going our way, you go yours. Agree with whoever you can agree,” he said May 6.

Yet visa-free travel for Turks in Europe was something that Erdogan himself had pushed hard for during his years as prime minister. In December 2013, he and Davutoglu, then foreign minister, oversaw the signing of a protocol that laid the groundwork for the visa waiver, simultaneously with a readmission agreement, under which Ankara pledged to take back illegal immigrants who reach the EU via Turkey. Speaking at the signing ceremony in Ankara, Erdogan hailed the accords as “a genuine milestone” in Turkey-EU ties, promising Turks visa-free travel to Europe in about three years’ time. In March, the readmission accord was compounded with a deal to stop the Syrian refugee flow to Europe.

Under Turkey’s anti-terror law, individuals and entities can easily be accused of being terrorists or collaborating with terrorism. Erdogan has come to handily use it as a tool to bully his political opponents, critical media, academics and intellectuals.

Many agree the EU-sought amendments in anti-terror laws do not suit Erdogan’s book politically, emboldening him to rebuff the EU and jeopardize the visa waiver. Indeed, his calculations on the issue are firmly based on political gains and losses. The collapse of the deal will not really mean big trouble for Erdogan, observers note, as his electorate and supporters will be little affected.

In the Nov. 1, 2015, elections, the Justice and Development Party (AKP) got 49.5% of the vote, or 24 million votes. Only about 10.5 million Turks are passport holders, meaning that the visa waiver concerns roughly one out of seven Turks, given the population stood at 78 million at the end of 2015. The total number of passport holders includes up to 1.5 million Turks with privileged passports who are already exempt from visa requirements in many countries, including the EU. Besides diplomatic passports, those include the "green passports" issued to senior public servants, bureaucrats and their families and the “gray passports” granted temporarily to government employees when they go abroad on official duties.

All in all, the fate of the visa waiver deal concerns about 8-9 million Turks who hold normal passports, a relatively small group in a population of 78 million.

According to the Turkish Statistics Institute, the number of Turks who traveled abroad in the first quarter of the year dropped to about 1.83 million, down 2.1% from the same period last year. In other words, less than one-fourth of passport holders traveled abroad.

Earlier this week, a lawmaker from the main opposition Republican People’s Party (CHP) submitted a draft law proposing that the mukhtars — the elected village and neighborhood headmen whom Erdogan convenes regularly in his palace for televised speeches — become eligible for the visa-free green passports so they could go abroad frequently to “increase their knowledge and skills.” If the proposal is passed, more than 50,000 Turks will join those exempt from visa requirements.

All figures mentioned above point to one reality: The EU visa waiver is of little concern for tens of millions of Turks who do not travel abroad, do not even have passports and lack the economic means to afford such trips. This state of affairs strengthens Erdogan’s hand in his showdown with the EU.

Lale Kemal, a journalist and writer specializing in defense and diplomacy, points out that individuals from middle- and high-income groups make the overwhelming majority of Turkish passport holders who are currently subject to visa requirements. She estimates their number at 6.5 million and describes them as urbanites who are already outside the AKP’s voter base. So Erdogan can easily afford to ignore them and threaten a showdown with the EU on the visa waiver and refugee deals.

By doing so, many believe, he is seeking to strengthen his bargaining hand and maximize the political concessions and financial support he hopes to extract from the EU. “To use such a grave humanitarian tragedy for domestic politics and money bargaining and to make all this a pretext … for pulling Turkey away from the West is unacceptable,” senior CHP member Erdogan Toprak said in a statement last week.

Government spokesman Numan Kurtulmus blamed the opposition for delaying the reforms the EU seeks. “Turkey tried to speedily enact the reforms concerning the visa liberalization. But, unfortunately, the parliament failed to work on the pace we desired because the process was often met with obstructions by the opposition,” he said.