Turkey has renewed efforts to get a visa waiver from the European Union, but the move could result in fresh tensions, as many in Europe remain incensed over Ankara’s human rights record. 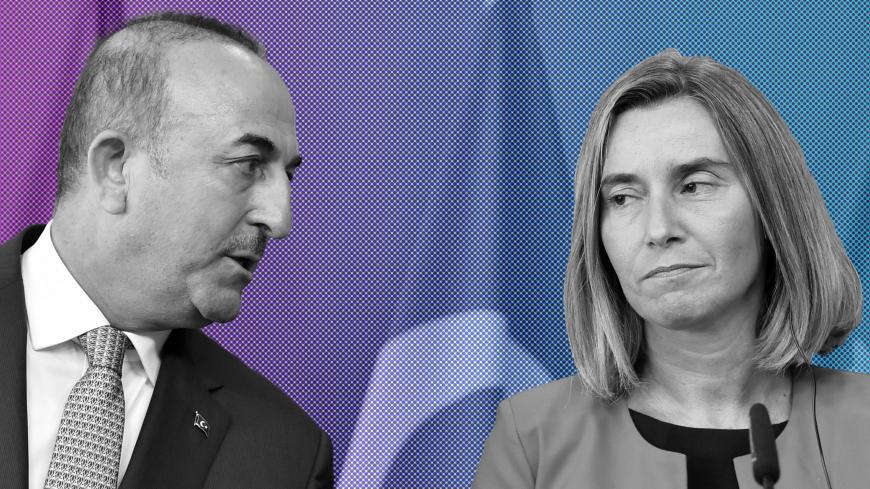 ANKARA, Turkey — In a 2013 deal with Turkey, the European Union had offered Turkish citizens the prospect of visa-free travel on the condition that Ankara met 72 criteria on democratic rights, especially the freedoms of thought and expression, the judiciary, civic society, economic transparency and combating corruption.

Visa-free travel for Turkish citizens was also a key issue in the refugee deal Turkey and the EU signed in March 2016. Ankara was supposed to meet all of the criteria by the end of that June, but failed to do so. The EU said seven criteria remained outstanding, criticizing Ankara for its broad definition of terrorism, which infringed on the freedoms of thought and expression. President Recep Tayyip Erdogan was infuriated. In a speech on May 6, 2016, he said Turkey remained under the threat of terrorism and slammed European authorities for tolerating exiled supporters of the armed Kurdistan Workers Party, considered a terrorist group by Ankara and much of the international community. “We're going our way, you go yours,” he declared.

In July that year, a botched coup attempt resulted in the declaration of a state of emergency, which is still ongoing. The aftermath of the putsch saw a ferocious crackdown on oppositional quarters marked by mass purges at public institutions and universities and the arrest of dozens of journalists, academics, politicians and parliament members. The crackdown plunged Turkey-EU relations to a new low.

Yet Erdogan seems to realize that the political and economic price of breaking up with the EU is growing bigger. He has taken up the issue of EU membership anew, including during recent trips to France and Italy, amid growing talk of normalizing ties with the EU. On Feb. 7, Turkey submitted documents to the European Commission, saying it had fulfilled the outstanding criteria for the visa waiver. “The ball is now in the EU’s court,” Foreign Minister Mevlut Cavusoglu said.

Presidential spokesman Ibrahim Kalin argued that the visa waiver should take effect this year. “We expect it to materialize as soon as possible … in light of the fulfillment of the 72 criteria,” he said. “If this materializes, the perception of the EU in Turkey will no doubt change.”

In general terms, the seven outstanding criteria required Ankara to introduce biometric passports for its citizens, adopt measures to fight corruption, conclude an operational cooperation accord with Europol, align its anti-terror legislation with EU standards, adopt rules on the protection of personal data in line with EU norms, cooperate efficiently with all EU countries on issues related to fighting crime and fully implement the terms of the refugee deal.

Turkey has since begun issuing biometric passports and adopted a law on the protection of personal data. Yet the EU has deemed those steps insufficient and not fully compliant with its standards.

On the issue of combating corruption, then-Prime Minister Ahmet Davutoglu had unveiled a “transparency package” in 2015, but the planned measures were soon shelved after vocal objections from Erdogan. Davutoglu was eventually forced to step down, and his successor Binali Yildirim never revisited the issue.

For the EU, the amendment of anti-terror legislation remains a top priority. Ankara has not only failed to make any move to meet the EU’s demands, but it has continued to arrest and prosecute opponents on terror-related charges. Most recently, the judiciary targeted members of the pro-Kurdish Peoples’ Democratic Party ahead of the party’s Feb. 11 convention in Ankara, with Co-chair Serpil Kemalbay topping the detention warrant list.

Meanwhile, the European Parliament, a key body in winning the visa waiver, passed a harsh resolution Feb. 8 condemning Ankara’s emergency rule, political pressure on the judiciary, arbitrary arrests of dissidents, suppression of the media and attempts to silence opponents. The resolution acknowledged that terrorism remained a threat for Turkey but stressed, “The broadly defined Turkish anti-terrorism legislation should not be used to punish citizens and media for exercising their right of freedom of expression.” The Turkish Foreign Ministry responded by calling the resolution “null and void.”

Just days earlier, EU leaders had announced they would hold a summit with Erdogan to review the state of EU-Turkish relations on March 26. Turkey wanted the summit to take place in Brussels, but the EU chose the city of Varna in Bulgaria, which is currently holding the rotating presidency of the bloc. The relegation of the venue suggests the EU is trying to give the meeting a low profile. The invitation to Erdogan says the agenda will focus on issues related to the supremacy of law and basic freedoms. Given Ankara’s toughening practices under the state of emergency, the Varna summit seems unlikely to yield any substantial results toward normalizing and improving ties.

Moreover, in EU heavyweight Germany, the coalition protocol between the Christian Union parties and the Social Democrats suggests that the EU door will be closing for Turkey. The protocol states that progress on Turkish demands such as the revision of the Turkey-EU customs union accord and the abolition of visa requirements will depend on Ankara’s fulfillment of its obligations. On the issue of membership talks, the protocol continues the current freeze. It describes Turkey as an important partner for Germany and an “EU neighbor,” dropping the reference to “strategic” cooperation used in the previous coalition protocol. In EU jargon, “neighborhood” policies refer to countries such as Ukraine, Israel and North African and Middle Eastern nations.

On Feb. 6, the European Commission announced a new strategy to expand into the Western Balkans, setting 2025 as the target year for the first accessions. Serbia and Montenegro appear first in line for the next enlargement, a perspective in which Turkey is nonexistent.

As the European Parliament’s resolution underscores, any visa waiver for Turkey requires first and foremost the lifting of the state of emergency and an end to suppression of the opposition, the media and government critics. Ankara may claim it has completed the required conditions, but a country whose lower courts have come to defy Constitutional Court rulings on rights violations could hardly impress the EU with its record.

The extension of custody periods via legislative decrees, the restriction of the rights of defense lawyers and the detention of hundreds of people for “terrorist propaganda” over social media posts can hardly satisfy EU norms. With more than 150 journalists languishing behind bars, Ankara’s argument that they landed in jail not for their journalistic activities but because of links to terrorist groups rings hollow.

Any visa waiver will require the approval of the European Parliament and the European Council. The European Parliament’s resolution already shows that almost no political bloc will be willing to vote in favor of such a gesture to Turkey. And with Germany and France floating an alternative status for Turkey less than membership, the country’s accession appears off the table until at least 2025.

To avoid the full alienation of Turkey, the EU might consider a limited visa waiver covering certain groups such as businesspeople, scientists, artists and civil society activists. Yet, inevitably, it would still require the lifting of emergency rule, the release of jailed journalists, steps to ensure judicial independence and the narrowing of the scope of terror crimes to exclude the expression of opinion.

In sum, Turkey seems unlikely to win a visa waiver and the EU is closing the membership door. A new crisis or fresh tensions in Turkey-EU ties should not come as a surprise.