Has Europe had enough of Erdogan?

A crisis in relations with Germany could have significant strategic and geopolitical implications for Turkey and its future. 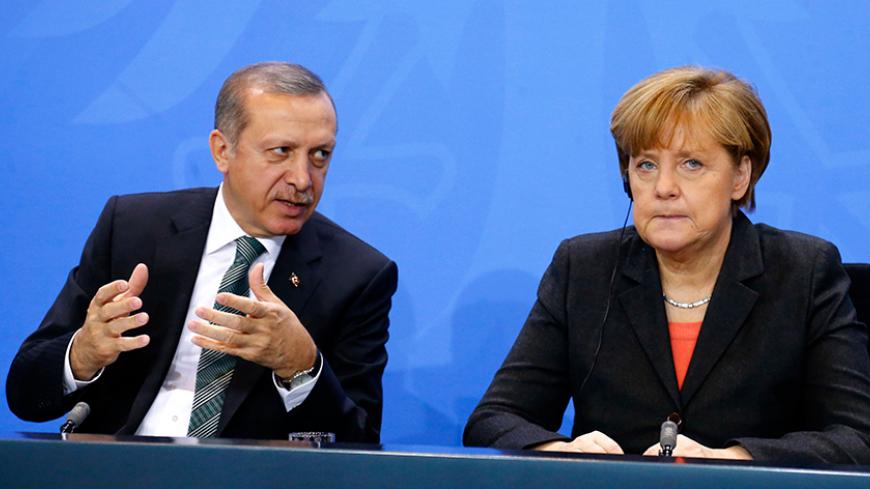 The collision between Turkey and the European Union (EU) was not unexpected, arriving as it did before mid-May. Now, attention has turned to the next looming crisis, between Ankara and Berlin.

German Chancellor Angela Merkel is not only the head of a leading European country who has stood firm against mounting domestic and foreign criticism of the deal she masterminded with Turkey to curb the flow of refugees into the Schengen zone. Merkel is also the de facto leader of the European Union. The deterioration of the relationship between Turkey and Germany will have a very strong imprint on the already troubled relations between Ankara and Brussels.

German weekly Der Spiegel reported May 13, “The tone between Ankara and Berlin is likely to worsen even further on June 2, when the German parliament intends to pass a resolution commemorating the 1915 genocide carried out by Turkey on the Armenians. Out of consideration for the sensitive negotiations with the government in Ankara, coalition parliamentarians opted not to pursue such a resolution last year. But now, with Erdogan not showing much interest in de-escalation, Merkel's conservatives along with the SPD [Social Democratic Party of Germany] want to pass the bill in three weeks' time. The draft resolution speaks clearly of 'genocide' and of ‘planned expulsion and destruction.’”

The Turkish-German relationship had already soured this month when it became clear that visa-free travel for Turkish citizens in the Schengen zone would not be implemented by June as stipulated by the Turkey-EU refugee deal, to which Merkel had seemingly tied her political survival. European Parliament President Martin Schulz outspokenly declared that unless Turkey met the 72 criteria for the fulfillment of visa-free travel, the EU body would not put the matter on its agenda. Turkey has met 65 of the 72 criteria, but the remaining seven are thorny for Ankara, particularly modification of the Anti-Terror Law, which is being abused to stifle any sort of dissent.

Turkish President Recep Tayyip Erdogan, unsurprisingly, has expressed indignation toward the EU. As Der Spiegel reported, while addressing the Europeans from a rostrum in Ankara, Erdogan roared, “Since when are you controlling Turkey? Who gave you the order?” Accusing Brussels, of trying to “divide” Turkey, he said, “Do you think we do not know that?” Some circles are interpreting his remarks as laying the groundwork for a break with Europe.

Unlike Schulz, who belongs to Germany’s center-left Social Democratic Party, which is sensitive to violations of human rights and basic freedoms in Turkey, the floor leader of the center-right European People’s Party, Manfred Weber, is from the Christian Social Union in Bavaria, a partner of Merkel's Christian Democratic Union. Adhering to realpolitik would be expected of Weber, yet he threatened to lift Turkey’s privileged access to the European market. “These things are not automatic,” Der Spiegel reported Weber as saying. “If President Erdogan continues to threaten us and bombard us with insults, then we’ll find ourselves at a dead-end. Europe is not dependent on Turkey.”

Erdogan feels similarly and never misses an opportunity to warn that Turkey can envisage parting ways with the EU. When visa-free travel began to look undoable given the requirement that Turkey change some of its legislation, the president asserted, “You go your way, let us go our way!” Volkan Bozkir, Turkey’s minister in charge of EU affairs and a former ambassador to the EU, parroted his boss Erdogan, reiterating that Turkey would not amend the Anti-Terror Law for the sake of visa-free travel.

Given the balance of power in Turkey, domestic considerations are important to Erdogan now more than ever. He cannot afford to appear weak in the face of anything, including the EU. At this juncture, his counterterrorism policy is more important to sell to the domestic audience than easier travel. Passport holders in Turkey do not exceed 10% of the population. For these reasons, Erdogan is prepared to allow the refugee deal to fail if Brussels remains immovable. His calculations are further aided by his firm conviction that Europe needs Turkey at this point in history more than Turkey needs Europe.

Erdogan's assessment, however, might be misguided. Der Spiegel, referring to the Turkey-EU deal, wrote, “After all, no one aside from the German chancellor appears to have much interest in the agreement anymore. Erdogan certainly doesn't: He does not want to make any concessions on his country's expansive anti-terror laws, the reform of which is one of a long list of conditions Turkey must meet before the EU will grant visa freedoms. The Europeans at large, wary of selling out their values to the autocrat in Ankara, are also deeply skeptical.”

Among those Europeans are some staunch and good friends of Turkey, such as Erik-Jan Zurcher, the Dutch historian and renowned expert on modern Turkey. This month, Zurcher returned Turkey's highest award, which had been presented to him a decade ago. He explained his rejection of the Medal of High Distinction in a fiercely critical piece for the Dutch media outlet NRC May 10. Accusing Erdogan of “dictatorial misrule,” he said that Turkey has no place in Europe:

"I have hesitated for a long time, not because I had illusions left about Erdogan and his ilk, but because such a demonstrative act might damage others besides myself, notably the dozens of MA and Ph.D. students that I have supervised over the years, many of whom have returned to Turkey. My signature is on their diplomas. I feel I have no choice, however. I have to do this precisely because, as professor of Turkish studies, I am seen as an authority on Turkey. I have to do it as a sign of protest against the dictatorial misrule of Erdogan in Turkey but also in recognition of the fact that I was wrong twelve years ago: Turkey has not come closer to Europe as it seemed in the now far-off years of 2002-2006, but since 2007 it has moved away. So far away that membership is no longer a realistic option. Our political leaders should say so loud and clear. Enough is enough."

The tension between Turkey and the EU, after a very optimistic period, has proved the predictions made by some pessimists (or, rather, realists) on the visa issue correct, including a former EU ambassador to Turkey, Marc Pierini. In April in “The Looming EU-Turkey Visa Drama,” he wrote the following lines: “On March 18, Brussels and Ankara agreed to a deal that aims to stem the flow of migrants from Turkey to the EU and promises among other things to lift the visa requirements for Turkish citizens entering the EU, provided Ankara meets the 72 standard technical conditions. With this agreement, EU leaders imprudently launched themselves into bazaar diplomacy and, worse, omitted to factor in the transparent and predictable workings of Turkey’s domestic politics.”

That is exactly what has happened, and now there is more “drama” ahead, bearing important strategic and geopolitical implications for Turkey and its future.