Turkey has submitted a position paper to Brussels promising to amend the counterterrorism law to decriminalize journalistic opinions, a long-standing demand from Europe before it will grant Turks visa-free travel. 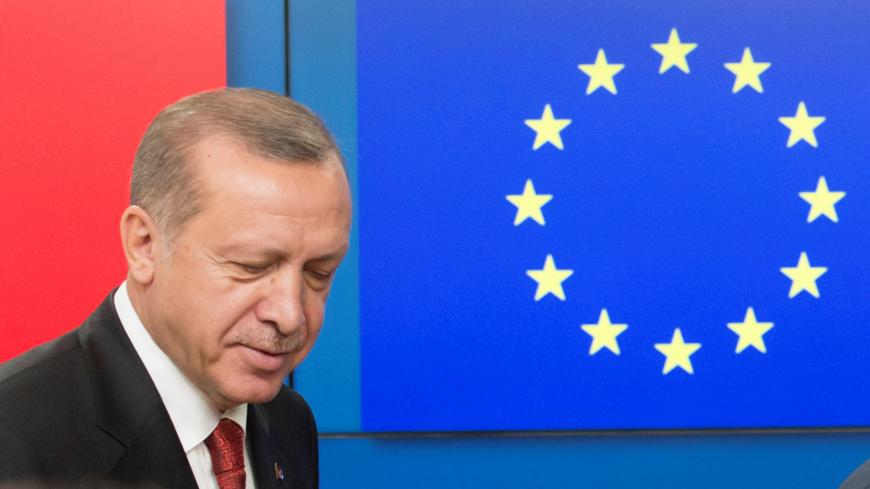 Turkey wants to turn a page in its strained relationship with the European Union to obtain visa-free travel, promising changes to its counterterrorism law to comply with the bloc’s human rights norms.

Presidential spokesman Ibrahim Kalin said Wednesday that Turkey has submitted proposals to the EU showing it will comply with the remaining seven of 72 criteria required to win its citizens unrestricted travel in the 26 EU states comprising the Schengen Area.

“We hope and expect that this will win Turkish-EU relations new momentum. I can say that a new process has begun from today,” Kalin said at a news conference.

A clause already in Turkey’s penal code that says critical opinions expressed in journalism are not criminal will now be added to the counterterrorism law, Cumhuriyet newspaper reported. Its omission from the separate anti-terrorism statute has helped turn Turkey into the world’s biggest jailer of journalists, with more than 120 behind bars for their work.

Other changes Turkey will make include steps to fight corruption, improve data protection and fully implement a readmission agreement for migrants, according to Cumhuriyet.

The measures, agreed upon in a 2016 deal that saw EU candidate country Turkey stemming the flow of irregular migration in exchange for visa liberalization and 6 billion euros ($7.4 billion) in refugee aid, comes even as ties with European nations remain fraught.

Just this week, the Netherlands announced it was formally withdrawing its ambassador to Ankara after he was denied entry for almost a year and that it will not accept a new Turkish envoy to the Hague.

Turkish President Recep Tayyip Erdogan has compared the Dutch and German governments to Nazis. For its part, the EU has decried his crackdown on journalists, opposition politicians and civil society that has jailed more than 50,000 people in the wake of an abortive military coup in 2016.

Amending the counterterrorism law “is not the only benchmark, but it is the most sensitive and critical one,” said Laura Batalla Adam, secretary-general of the European Parliament’s Turkey Forum. “Now we are seeing a very important rapprochement. Both sides acknowledge the need for a constructive and honest dialogue [and] we are beginning to see a normalization in our relations,” she told Al-Monitor.

Batalla pointed to visits by Erdogan to France, Italy and Greece in recent months as a sign of a diplomatic thaw. The EU will host Erdogan at a summit next month in Bulgaria, his first meeting with EU leaders since talks on the sidelines of a NATO meeting in May 2017.

There, Erdogan is expected to press the bloc for more financial assistance for Syrian refugees and visa-free travel, as well as improvements in the customs union that oversees trade between Turkey and the EU. Reuters cited a senior EU official as saying that visa-free travel and customs progress were a "no-go.”

Batalla noted that the funds for displaced Syrians is a distinct matter from the bloc’s concerns about civil liberties, but that the EU may include a “human rights clause” before Turkey can start talks on the customs union.

NATO member Turkey began EU accession negotiations in 2005, but its failure to adhere to democratic values and Europeans’ wariness about admitting a large Muslim state have made membership an elusive, even implausible quest.

Yet the two sides rely on one another for security cooperation, whether it is Turkey’s role in curbing migration to Europe, a buffer with the tumultuous Middle East or as part of an alliance that counterbalances a resurgent Russia, Ilter Turan, a professor emeritus of international relations at Bilgi University in Istanbul, told Al-Monitor. The Eurozone is Turkey’s biggest export market and source of foreign investment, and European companies see Turkey’s growing population and economy as a way to offset declines in their home markets, he said.

“When you combine these, it is only natural that the two sides should support each other. The relationship is not based on narrow interests, and ties, even if they are troubled, are based on a strong foundation. Turkey’s is a society that sees Europe as representative of an aspiration,” Turan said, arguing that visiting Europe without a visa remains exceedingly popular, even among conservative Turks.

That affinity for Europe does not translate into support for membership, however. A survey conducted by research firm MetroPoll last month showed that just 35.5% of Turks want to see the country in the EU, compared with 73% in 2004.

Ankara has repeatedly accused the EU of stalling on its pledge to provide cash and visas in exchange for Turkey sheltering more than 3 million Syrian refugees who have fled the seven-year war. It has at times threatened to scupper the arrangement, which could unleash a humanitarian crisis like the one in 2015, when a record 1.05 million people reached Europe, almost all of them via Turkey.

But Turkey had dragged its feet on fulfilling EU criteria for a year, arguing it needed tough measures to combat political violence.

How far the change will go toward improving the plight of Turkish journalists is unclear. It will not “inconvenience” Turkey in its counterterrorism efforts because it is “the technical fulfillment of the benchmark rather than a comprehensive amendment,” Hurriyet Daily News cited a Turkish official as saying.

In a sign there is no hurry to change course, authorities raided homes on Wednesday to detain 31 members of the opposition Peoples’ Democratic Party.

The European Parliament is voting on a resolution this week on the human rights situation in Turkey, urging it against using the counterterrorism legislation “to punish citizens and media for exercising their right of freedom of expression.”

That Turkey is taking this step now “does show that Europe can still have a democratizing influence on Turkey,” said Turan.