Turkish President Recep Tayyip Erdogan would like to forget that part of the refugee deal with the European Union involves amending the country's Anti-Terror Law. 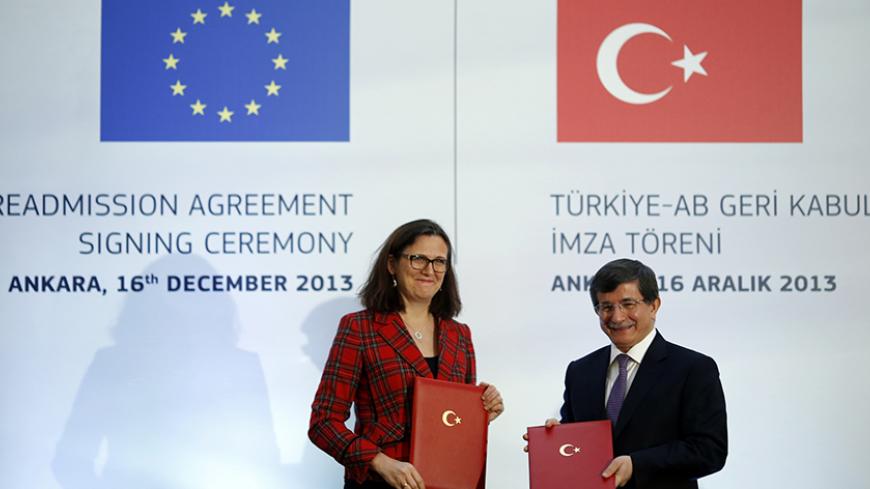 Turkish President Recep Tayyip Erdogan had a recent bout of political amnesia that sent a strong signal that the refugee deal reached March 18 between outgoing Prime Minister Ahmet Davutoglu and the European Union (EU) is under threat from Ankara. What brought on this spell and how does it put strain on the deal?

Erdogan’s problem is not with the refugee deal itself, under which Ankara agreed to re-admit Syrian refugees who reach the EU via Turkey. Rather, what bothers him is a related issue — an accord envisaging visa-free travel for Turkish citizens in the EU’s Schengen zone that Davutoglu signed on Dec. 16, 2013, while he was foreign minister and Erdogan prime minister. It was Davutoglu who linked the visa agreement to the refugee deal, and it is this connection that contributed to the amnesia threatening the refugee deal.

Claiming to be driving a hard bargain in the refugee negotiations, Davutoglu insisted on attaching unrelated issues to the deal. One of them was the opening of two new chapters in Turkey’s EU accession talks, which the two sides pretend are ongoing. The other was an agreement to bring forward the implementation date of the visa waiver program from October this year to June. If everything had gone smoothly, Turkish citizens would be eligible for visa-free travel to Europe four months earlier than expected, and credit would go to Davutoglu as the winner of the “tough bargaining.”

Yes, the EU agreed to move the implementation date forward, but it did not soften the conditions required for the program's inauguration. To obtain a visa waiver for its citizens, Ankara still had to fulfill the 72 criteria outlined in the road map of the 2013 deal. It is these conditions that triggered Erdogan’s fit of political amnesia and about which he forgot during the episode.

Speaking to a group of businesspeople on May 10 — six days after overriding the neutrality constitutionally imposed on the president and forcing Davutoglu to resign as prime minister and as chairman of the Justice and Development Party (AKP) — Erdogan recalled that as prime minister, he had been promised visa-free travel beginning in October. He then said, “Later, they suggested to move it forward to June. But they said something else as well and put forward 72 points for us to fulfill. This version is something new. Where did all these come from? There are [particularly] five points among them, one of which is a disaster. They want us to amend the Anti-Terror Law.”

Referring to a tent that supporters of the Kurdistan Workers Party (PKK) had erected in Brussels, Erdogan went on to say, “We are fighting terrorism and terrorists here, but those gentlemen allow terrorists to erect a tent outside the European Parliament and then tell us to amend the Anti-Terror Law. When did you get the idea that Turkey takes orders? That’s not possible.”

Erdogan seemed to be annoyed that the visa-waiver deal had been brought forward. Odder still, he blamed this not on Davutoglu but on the EU. His annoyance might be explained by the political calendar he has in mind for the last months of the year, when many expect him to force early elections or a referendum on a constitutional amendment to install an authoritarian presidential system. One can imagine that a visa-free travel regime beginning in October would be more advantageous for Erdogan, to boost his support as voters go to the ballot box around the same time.

Yet, the diagnosis that Erdogan has suffered political amnesia stems from his acting as if he knew nothing about the 72 criteria, even though he sat in the front row during the signing and even pledged, as prime minister, that the process would be resolutely followed. Since then, Turkey has fulfilled 67 of the criteria, with five remaining. There is no way for Erdogan to be unaware of them, so why is he pretending he is? Because under the road map of the visa-waiver deal, Turkey has to amend its Anti-Terror Law in line with EU standards.

This condition, presented in the chapter on citizenship rights and protection of minorities, requires Turkey to align its laws with union norms, including the EU acquis and European Court of Human Rights judgments. The objective here is to safeguard Turkish citizens’ freedoms and rights to security, fair trial, free speech, assembly and organization, and protect against malfeasance by the security forces and broad interpretations of the law by the judiciary. Hence, by refusing to amend the Anti-Terror Law, Erdogan is in fact rejecting democratization and compliance with EU standards in regard to human rights and freedoms.

Another of the five outstanding criteria pertains to EU norms against corruption. Ankara’s failure to act here is understandable and logical, given that no government in Turkish history has faced graver allegations of corruption than the incumbent one.

One may therefore ask why Erdogan acquiesced to the anti-terror amendment in the first place. He agreed because at the time it did not conflict with his interests. This is no longer the case, however. Back in December 2013, a period of non-hostility, packaged as a “peace process,” was underway with the PKK. For Erdogan, maintaining the truce was crucial for safely weathering the municipal and presidential elections upcoming in 2014. The notion of harmonizing anti-terror laws with EU norms thus did not bother him at the time.

Today, however, Erdogan has no other option but to continue the war on the PKK that he launched 10 months ago. A military conclusion to the war is impossible, while negotiating with the PKK will clearly cost him the votes he needs to lure from the Nationalist Action Party’s base to get what he wants from early elections or a referendum. So, the real reason for his objection to “softening” the Anti-Terror Law in line with EU norms is the risk of losing the precious nationalist vote. Having seized full control after discarding Davutoglu, Erdogan is now playing for time while trying to push the EU, via aides, to relax this criteria, as evidenced in a recent tweet by Burhan Kuzu, a senior AKP lawmaker and party leader.

Kuzu, whom Erdogan counts on to promote the executive presidency he seeks, warned the European Parliament May 10 not to make the “wrong decision” on the visa-waiver deal or “we’ll send the refugees” to Europe. Three days after this blunt message, Turkey's EU minister, Volkan Bozkir, spelled out in Brussels what Ankara actually wants: The EU Commission should reconsider the issue, he said, urging “fresh consultations on overcoming the five criteria.”

In short, Erdogan wants the visa-waiver deal to go ahead but without compliance with the EU’s anti-terror and anti-corruption norms. The EU, however, has no reason to make concessions on these issues. Should Erdogan attempt to use the refugee deal to threaten and blackmail the union, a crisis with serious consequences will be inevitable.