Opposition says the deal aims to reduce Europe’s discomfort and poses a threat to Turkey. 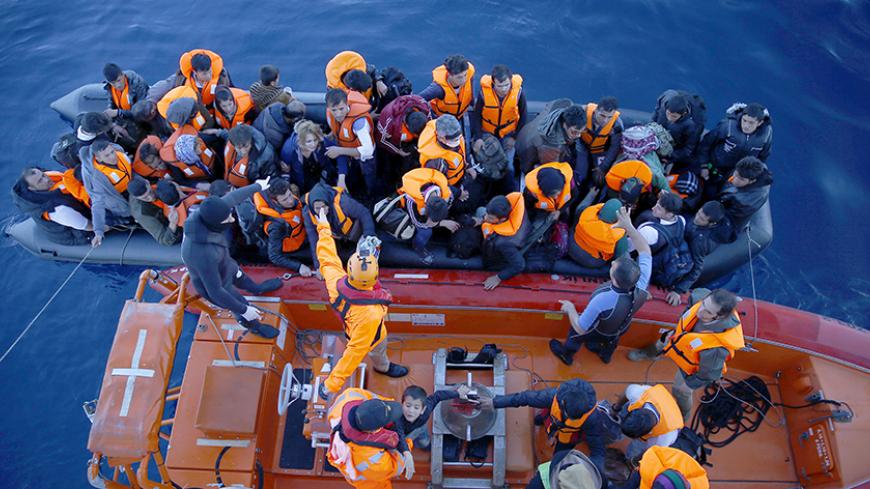 Refugees and migrants board Turkish Coast Guard Search and Rescue ship Umut-703 after a failed attempt at crossing to the Greek island of Chios off the shores of Izmir, Turkey, Feb. 28, 2016. - REUTERS/Umit Bektas

There was much fanfare among government circles in Ankara after Turkey and the European Union concluded on March 18 what Prime Minister Ahmet Davutoglu calls a “historic agreement” aimed at stemming the uncontrolled flow of refugees to Europe. Not everyone in Turkey is convinced, however, that Ankara emerged from the bargain as a winner, as the government claims. Many also question the morality of using refugees to barter for gains that have nothing to do with the plight of desperate people.

The agreement foresees sending back, beginning April 4, all refugees who cross or have crossed illegally into EU territory via Turkey after March 20. In return for each refugee sent back, a refugee will be sent to Europe from Turkey through legal channels.

The ceiling for those to be sent to Europe will be 72,000, and if this is exceeded, the agreement will be deemed to have failed in its mission of discouraging illegal entry. On paper at least, there will be no forced or mass expulsions, and the process of returning refugees to Turkey will be monitored by the Office of the United Nations High Commissioner for Refugees, which has expressed reservations about the legality of the agreement.

The EU will also allocate 3 billion euros ($3.4 billion) to Ankara under the so-called Facility for Refugees in Turkey and will mobilize an additional 3 billion euros by the end of 2018. The EU will also grant visa-free travel for Turks by the end of 2016, provided Ankara satisfies 72 criteria, which the government says it is ready to do. The EU has also promised to “re-energize” Turkey’s membership process by lifting barriers some member states had placed in Ankara’s path.

After the deal was struck in Brussels, Davutoglu announced a “new and historic chapter in ties with Europe,” asserting, “Today we realized that Turkey and the EU have the same destiny, the same challenges and the same future.”

Prior to the summit, he had bragged about securing major concessions from the EU through the tough “Kayseri bargaining” he and his diplomatic team had conducted. This is a polite way of saying “horse trading” in Turkish and refers to the central Anatolian city of Kayseri, which is known for producing some of Turkey’s richest and most resourceful businessmen.

The president of the European Council, Donald Tusk, who, along with the president of the European Commission, Jean-Claude Juncker, negotiated the refugee agreement with Davutoglu, was more cautious. “Some may think this agreement is a silver bullet but reality is more complex,” he said during the press conference in Brussels after the deal was concluded.

Tusk was echoing the sentiment of many EU leaders who argue that while an agreement has been made on paper, it remains to be seen if it can be implemented given the major legal and moral hurdles that have yet to be overcome.

Amnesty International agreed with Davutoglu that the deal is “historic,” but for the wrong reason, calling it a “historic blow to human rights.” “Promises to respect international and European law appear suspiciously like the sugar coating the cyanide pill that refugee protection in Europe has just been forced to swallow,” the organization said in a statement.

There are also doubts in Turkey about the agreement. Kemal Kilicdaroglu, leader of the main opposition Republican People's Party, accused the government of turning Turkey into a “buffer zone for Europe” against refugees. “Why don’t we give [the EU] 6 billion euros and let them take all the Syrians, Afghans and Pakistanis,” Kilicdaroglu said cynically, trying to highlight the immorality of bargaining over the rights of refugees.

He also accused the EU of violating its own principles. “Who will they take in? University graduates, those who have skills. As to the rest they are saying, ‘You are on your own,’” Kilicdaroglu said, indicating that such selectivity represented a “great disrespect for human rights.”

Meanwhile, the Nationalist Action Party argued that the agreement, which aimed to “keep foreigners out of Europe,” posed a threat to Turkey’s national interests. “This agreement makes Turkey the EU’s border guard and turns it into an assembly point for refugees so that EU countries do not feel discomfort,” Sefkat Cetin, the party’s deputy head, said in a statement.

He accused the government of not considering the burden the agreement will place on Turkey and the social problems it will cause. Cetin also expressed doubts about the promise of visa-free travel for Turks in Europe, saying there is no definite indication as to when this will actually happen.

Uluc Ozulker, a retired ambassador whose postings included Paris (2002-2005), agreed, arguing that it was not clear how the hurdle of Cyprus will be overcome. “Turkey does not recognize Cyprus even though it is a fully fledged EU member. Cyprus will likely veto any visa deal until Ankara recognizes Cyprus,” Ozulker told Al-Monitor.

He also questioned the morality of the refugee agreement and expressed doubts that it can be implemented within the proposed time frame. “Once such mass movements begin, they are hard to stop. Preventing refugees from coming is not possible or ethical. Neither is it ethical to be selective about who will be admitted,” he said.

Ozulker does not believe Greece, the country refugees go to from Turkey, has the capacity to organize in time to meet the requirements of the agreement. He is also skeptical that Turkey can fulfill the necessary legal requirements and questions how a divided parliament that can't agree on anything will be able to come up with the necessary legislation in 20-25 days.

“If the government passes these laws on its own in the parliament, this will invite fresh trouble,” Ozulker said before going on to question how Turkey will train the personnel required by the agreement in 15-20 days. Ozulker is also doubtful that the EU promise to revisit Turkey’s membership process will be kept, because there is a lack of will in Europe in this regard.

“One positive aspect to this whole affair is that Europe has seen that it needs to cooperate with Turkey. If Turkey can take positive steps in terms of democracy and human rights, this could also help bring the sides closer,” Ozulker said. “But there is a lack of will in Ankara in this regard, so we will have to wait and see what all this really translates into with regard to Turkish-EU ties.”