Turkish President Recep Tayyip Erdogan will meet European leaders this week to determine how the strained relationship between Ankara and Brussels will proceed henceforth. 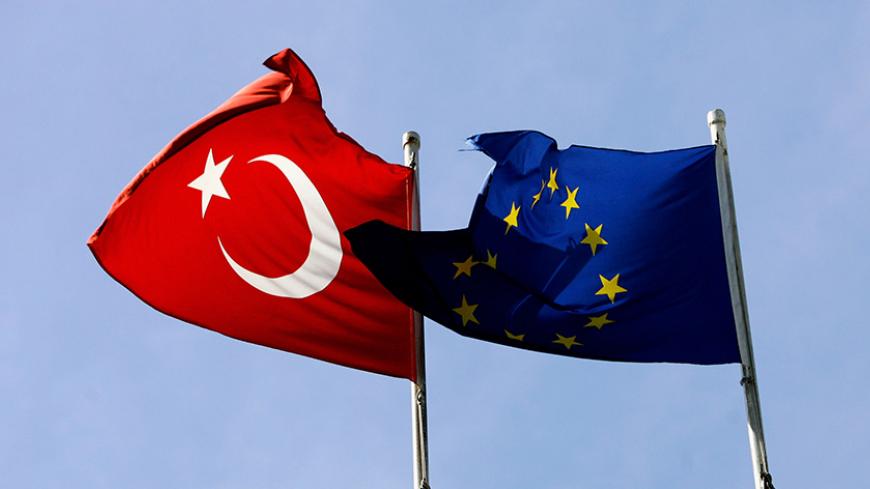 Eyes will be on Turkish President Recep Tayyip Erdogan’s meetings this week with key European leaders on the sidelines of the NATO summit in Brussels.

These meetings will take place amid deep divisions between Turkey and Europe, which reached some of their lowest levels before last month’s constitutional referendum in Turkey that vested all political power in Erdogan’s hands.

The situation was exacerbated by Erdogan’s “Nazi” jibes targeting European politicians and officials in response to criticism of his undemocratic leanings, and by restrictions placed by various European countries on his canvassing activities for support from millions of expatriate Turks for his executive presidency.

Nevertheless, there are signs that the sides are trying to reduce tensions to move forward for the sake of broader interests.

For example, the European Union decided during a meeting of foreign ministers in Valletta, Malta, on April 28 not to terminate Turkey’s EU bid, but to continue encouraging Ankara to meet democratic standards required for membership. Following the Valletta meeting, EU foreign policy chief Federica Mogherini even expressed “respect” for the results of Turkey’s constitutional referendum, even though international observers have flagged serious shortcomings regarding the fairness of the vote.

Foreign Minister Mevlut Cavusoglu declared earlier this month that a Turkey-EU summit could result from Erdogan’s talks in Brussels and determine how ties will proceed henceforth.

Despite threats by Erdogan prior to the referendum to terminate Turkey’s EU membership talks, Cavusoglu stressed Ankara’s desire to continue with the EU. He told a pro-government television channel that “European values of democracy and human rights are also shared by Turkey,” adding, “[Ankara’s] only problem with the EU is its approach [to Turkey].”

Cavusoglu was referring to the years of foot-dragging by the EU on Ankara’s membership bid — due to cultural and religious differences — even when Turkey was making headway in enhancing its democracy and human rights.

There is scant evidence, however, given the manner in which Erdogan has done away with key prerequisites for true democracy — starting with the separation of powers and freedom of the press — and undermined the country’s parliamentary system, to corroborate Cavusoglu’s claim that Turkey still shares European democratic values.

The picture regarding human rights is no better, given the continuing security dragnet against thousands of Erdogan’s opponents — including journalists, academics and bureaucrats — who are accused on the shakiest of grounds of supporting last year’s failed coup attempt against Erdogan.

It is evident that Turkey’s EU bid cannot move forward under these conditions, even if opposition to EU membership on cultural and religious grounds was to fade away. It is also evident, however, that the sides are considering their strategic interests in the economic and security domains and are not prepared to go for a full severance of ties.

The EU represents 64% of the foreign investment in Turkey and remains its vital trading partner. Turkey is also a vast market that Europe can’t afford to overlook, given the highly competitive nature of the integrated global economy.

Retired Ambassador Uluc Ozulker, a former permanent representative to the EU, stresses that the customs union Ankara has with the EU is contingent upon Turkey’s EU membership bid remaining open. “Without a membership perspective, Turkey would have to negotiate a new free-trade deal with the EU, the way Britain has to now after Brexit,” Ozulker told Al-Monitor. “There is no guarantee, however, that it will be able to secure the advantages it has under the customs union if it were to opt for a new trade deal with the EU.”

Ozulker also noted that since the Justice and Development Party came to power in 2002, Turkey has received no less than $600 billion from the EU in credits, which belies claims that Turkey has gotten little out of its ties with the EU. Turkey and the EU are also cooperating on a host of political, social and security issues that are vital for both sides. The case of Syrian refugees and the fight against terrorism are cases in point.

Despite Ankara's threats to end cooperation on the issue of illegal immigration if the EU does not honor its promise to lift the visa restriction on Turks, this cooperation is likely to continue due to the force of circumstances. The same applies to cooperation against Islamic terrorism despite angry claims by Turkey that European countries are lenient on supporters of the outlawed Kurdistan Workers Party, which is waging a campaign of terror in Turkey.

Ozulker pointed out that cooperating on security issues with Turkey — which remains an advance outpost for Europe given its strategic placing — also remains vitally important for the EU. “There is no love lost for Erdogan, who is distrusted in Europe. Strategic considerations, however, are forcing the EU to make a distinction between Erdogan and Turkey in order to continue cooperating with Ankara,” Ozulker said.

Ozulker also pointed to rising Islamophobia in Europe, which has millions of Muslim citizens. “If Turkey is alienated, this will also stoke Islamophobia. As a major Islamic power, Turkey will also become a problem for Europe, which clearly no one in Europe wants,” he said.

All of this makes Erdogan’s meeting with EU leaders in Brussels crucial. His talks will provide some clues to the new modus vivendi that Turkish-EU ties will operate under in the coming period.

Erdogan, of course, continues to blow hot and cold toward Europe — but a more moderate tone has also crept into his general approach when compared with the vitriol he was laying on Europe before Turkey’s constitutional referendum. Issuing a “Europe Day” statement on May 9, he characterized Turkey as “a country that has been part of European history, geography and culture for centuries.” He expressed Turkey’s desire to maintain its membership bid — which he referred to as a “strategic target” — based on “mutual respect, equality and a win-win mentality.”

Erdogan underlined EU membership as a “strategic target” for Turkey, despite his countless threats to sever ties with the EU and turn Turkey’s direction elsewhere.

Marc Pierini, a former EU ambassador to Turkey, says Erdogan’s meetings with EU leaders in Brussels “may offer a chance for progress toward reconciliation,” even if Ankara’s membership prospects remain remote. In an article for Carnegie Europe, where he is currently working, Pierini said some progress could be made in Brussels “provided there is enough goodwill on Turkey’s end and that the EU and Turkey can sort out their most immediate priorities.”

He pointed out that the EU has been careful not to close the door on Turkey, preferring instead to only recall principles that Ankara also agreed to honor. “It is now up to Turkey to decide whether to stay away from these principles or to move closer to them,” Pierini argued.

Erdogan’s Turkey appears to have made its decision with regard to those principles, which makes Turkey’s EU membership a highly unlikely prospect for the foreseeable future. Clearly, though, there is a realization on both sides that ties will have to continue for pragmatic reasons. Maintaining the “white lie” of Turkey’s eventual membership in the EU — provided necessary conditions are met — to enable cooperation on the practical level to continue will most likely be the formula the sides come up with.