Are Turkey and Europe seeking a new kind of relationship?

Turkey’s EU membership bid has reached an impasse, but cooperation between Ankara and Brussels continues in key areas of mutual interest. 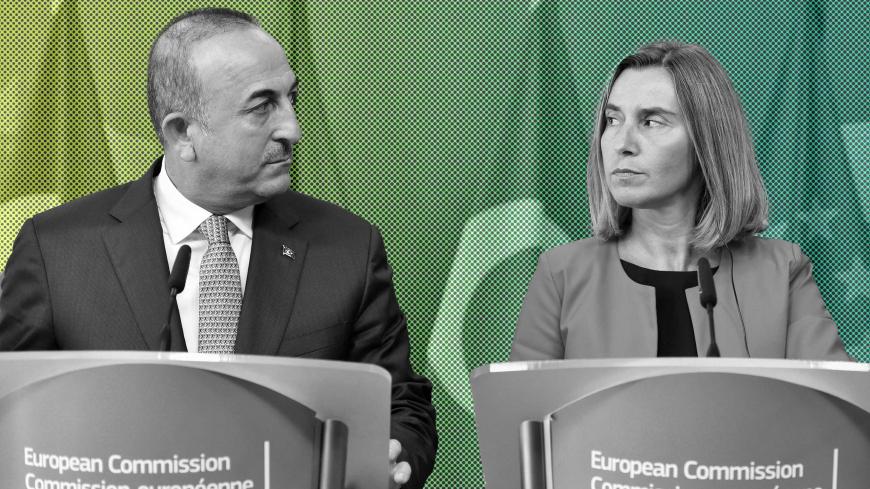 Turkey-EU ties are currently marked by mutual resentments and appear to be going nowhere. In a sign of the times, Brussels is withholding 175 million euros ($206 million) in pre-accession funds for Turkey, which on paper remains a candidate for EU membership.

Ankara, however, continues to defiantly say it doesn’t need EU money or membership. It is, nevertheless, trying to develop ties with individual EU members, which seems to represent a search for another kind of relationship with Europe.

Meanwhile, cooperation between Turkey and the EU continues in key areas on the basis of existing institutional frameworks.

Although it claims that it doesn’t need EU membership, Ankara refuses to end this bid unilaterally. Addressing the Bloomberg Global Business forum in September, President Recep Tayyip Erdogan challenged the EU again to close its door to Turkey, if it can.

“They want Turkey to go, but we will not leave the rink," Erdogan said.

The EU has disregarded this challenge, citing strategic considerations that make it necessary for Ankara’s membership bid to continue, despite the deterioration in Turkey’s democracy.

French President Emmanuel Macron, who has emerged as Erdogan’s principal European interlocutor today, told the Greek Kathimerini newspaper in September that while Turkey may have strayed from the democratic path, he wants to “avoid a split because it’s a vital partner in many crises we all face, notably the immigration challenge and the terrorist threat.”

Turkey also has serious issues with Europe that fuel domestic animosity against the EU. These include the support it says the outlawed Kurdistan Workers Party (PKK) gets from within Europe, despite the fact that the EU has listed this group as a terrorist organization.

The EU’s refusal to classify the so-called Fethullah Gulen Terror Organization (FETO), a term Ankara uses to refer to Gulen followers, as a terrorist group is another sore point for Turkey. Ankara says this group was behind the failed coup against Erdogan in 2016.

The EU’s Counterterrorism Coordinator Gilles de Kerchove, who was in Ankara last week, told Reuters they were unlikely to change their position on FETO due to a lack of concrete evidence against the group.

Various EU countries, including Germany and France, are angry about EU citizens arrested in Turkey on what they say are trumped-up charges trying to link them to the PKK or FETO. They are accusing Ankara of holding these people as hostages.

None of this seems to augur well for the future of Turkish-EU relations. Yet there is an increased flurry of diplomatic activity between the sides. Using the institutional framework of Ankara’s continuing status as an EU candidate country, both sides are addressing issues of mutual interest, regardless of where Turkey’s membership bid stands.

Kerchove’s talks in Ankara last week highlighted terrorism as one area where the sides believe cooperation has to continue, despite existing differences and mutual resentments.

Marc Pierini, a former EU envoy to Turkey and currently with Carnegie Europe, argued in a recent article, “More than ever before, strong counterterrorism cooperation needs to be a central component of the overall relationship between the EU and Turkey.”

Turkey was satisfied after the European Parliament moved in November to ban entry to its premises by individuals or groups sympathetic to the PKK or its affiliates. Turkey also was pleased over Berlin’s decision to ban PKK banners during pro-Kurdish demonstrations in Germany.

Ankara insists that much more has to be done, but these developments nevertheless suggest that EU-Turkish cooperation against terrorism is making headway.

Another key area of cooperation relates to the refugee and migration crisis. The EU Commissioner for Migration and Home Affairs Dimitris Avramopoulos, who also visited Ankara in November, told Hurriyet Daily News in an interview that the migration deal between Turkey and the EU, agreed on in March 2016, was “succeeding in substantially reducing irregular and dangerous arrivals.”

Ankara has also reportedly worked out a new roadmap to speed up visa liberalization for Turks traveling to Europe, proposed under the 2016 migration deal. The EU’s demand that Turkey review its terrorism law and narrow the scope of the definition of terrorist activities is the main obstacle facing visa liberalization.

Ankara has so far refused to do what the EU wants but is now said to be preparing a new “roadmap” that it hopes will satisfy the EU side, while not weakening Turkey’s fight against terrorism. Foreign Minister Mevlut Cavusoglu is due to submit the plan to his European counterparts in Brussels next week if Erdogan approves it.

There is also the matter of the vast mutual economic interests enshrined in the EU-Turkey customs union, which the sides are trying to overhaul now, even if this is proving to be an uphill battle due to differences on issues like competition policy and the law on trade unions.

Not wanting to be left friendless in Europe, Ankara is also actively seeking new allies among EU members who it can lean on. France under Macron appears to be willing to play this role.

Even Yigit Bulut, Erdogan’s economic adviser who is known for his fanatically anti-Western sentiments, and who believes the center of the world is shifting eastward, is pointing to France now as a possible ally.

“With regard to character, I believe it is easier for us to agree and establish a healthy relationship with the French,” Bulut wrote in his column in the pro-government Star newspaper. However, he underlined that any steps in this context must be based on initiatives to be taken by both countries and not be a one-sided affair.

Since coming to power, Macron has maintained his dialogue with Erdogan over a host of issues, especially those relating to the Middle East. This comes at a time when Turkey’s relations with Germany are at an all-time low.

Turkey also signed a letter of intent with France and Italy in November to strengthen cooperation on joint defense projects, including air and missile defense systems. This occurred against the backdrop of accusations aimed at Turkey for opting to buy Russian S-400 anti-ballistic missiles, which many in the West see as a sign that Ankara is straying from the European defense network.

Meanwhile, Prime Minister Binali Yildirim was in London recently for talks with Prime Minister Theresa May. The UK and France are the only nuclear powers in Europe, and they represent two pillars of European defense. This also adds significance to Ankara’s desire to develop ties with these two countries at a time when its links to the EU are fraying.

Erdogan is also due in Athens this week for talks aimed at increasing cooperation between the two countries. This heightened diplomatic activity shows Ankara’s desire to maintain ties with the EU through member states that are more sympathetic to Turkey.

Ozlem Kaygusuz, who lectures on international politics in Ankara University’s political science faculty, fears this overall approach will be to Turkey’s disadvantage in the long run because it will weaken Turkey’s EU membership bid further and relegate Ankara’s relations with Brussels to the same subcategory as Russia’s relationship with the EU.

“For Turkey, a country that is negotiating membership, to regress to such a position is undoubtedly very negative and may be irrevocable,” Kaygusuz wrote in an article for the internet news portal Diken.

Turkey’s failure to attain European standards of democracy and human rights, however, is ultimately to blame for the impasse in Ankara’s bid for full EU membership. Nevertheless, cooperation with the EU in crucial areas and attempts to develop Turkey’s ties with key European countries appear set to continue.