Ankara is furious as European countries ban rallies by Turkish ministers aimed at getting support of expatriate Turks for Erdogan’s executive presidency. 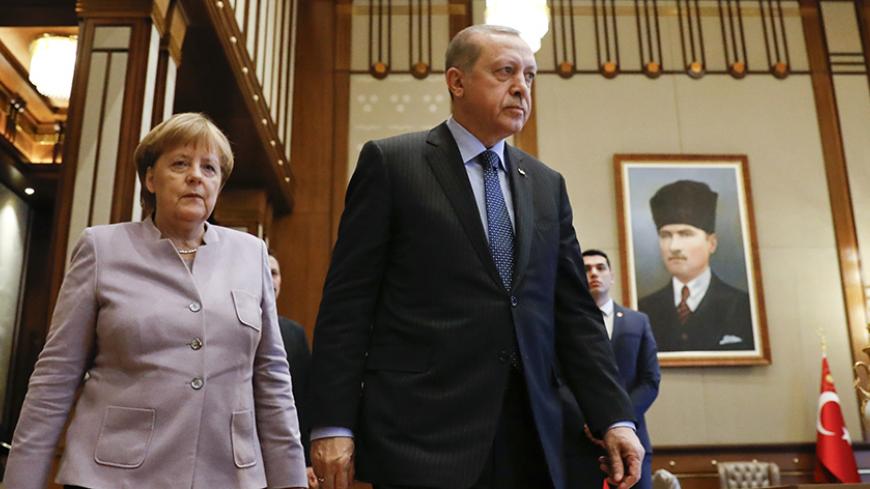 Turkish President Recep Tayyip Erdogan’s antipathy for the West has boiled over again. He is back to hurling furious insults at various European countries — mainly Germany, the principal target of his current fury.

At issue this time is the refusal by local German authorities to allow Turkish ministers to hold political rallies in their districts, which have large Turkish communities, in support of amendments to the Turkish Constitution that would give Erdogan extraordinary powers and make him Turkey’s sole leader.

A referendum on the topic is to be held April 16, and the support of millions of Turks in Europe who are eligible to vote could be crucial.

Ankara is also angry with many other European countries, saying they are soft on political activities on their soil by groups affiliated with the outlawed Kurdistan Workers Party (PKK) and lenient toward asylum-seeking supporters of Fethullah Gulen, the Islamic cleric accused of masterminding the failed coup attempt on July 15, 2016.

Citing security concerns, local officials in the town of Gaggenau in Baden-Wurttemberg revoked permission last week for Turkish Justice Minister Bekir Bozdag to address a crowd of Turks there. A few days later, local officials in Cologne did the same for Turkey's Economy Minister Nihat Zeybekci.

Dutch Prime Minister Mark Rutte also came out last week against such rallies being held in the Netherlands. “We believe that the Dutch public space is not the place for political campaigns of other countries,” Rutte posted on Facebook.

Austria, the European Union member state that is working hard to halt the EU’s membership talks with Turkey, did not waste the opportunity either. Chancellor Christian Kern called for an EU-wide ban on all campaigns by Turkish politicians.

Ankara’s response was fast and furious. Canceling his trip to Germany, Bozdag said he did not believe Berlin’s claim that the central government had nothing to do with the ban in Gaggenau. “What was done to us is a fascist practice. Their past illness has resurfaced,” Bozdag said.

In his response to Rutte, Turkish Foreign Minister Mevlut Cavusoglu accused the Dutch government of "surrendering to Geert Wilders,” the fanatically anti-Islamic leader of the far-right Party for Freedom in the Netherlands.

Turkey's EU minister, Omer Celik, accused Kern of “using the language of European racists,” and said this was a violation of EU principles, adding that “the EU must act against such governments.”

The angriest response, though, colored with a characterization aimed at hitting Germany where it hurts — and which under normal circumstances would have burned bridges between the two countries — came from Erdogan.

“I thought Nazism had ended in Germany, but we see it still continues,” Erdogan told his supporters in Istanbul over the weekend. “They think it was Tayyip Erdogan who was going to Germany. If I want to I will go tomorrow, and if they don’t let me in or if they prevent me from speaking there, I will stir up the world,” Erdogan said threateningly.

Unlike the Netherlands and Austria, though, Germany — undoubtedly due to the millions of Turks it hosts and its long-standing economic and political ties with Turkey — is trying to avoid a crisis with Turkey.

In an article for Bild Am Sonntag newspaper, German Foreign Minister Sigmar Gabriel said the two counties were passing through a difficult moment but argued that the friendship between them was strong enough to overcome current difficulties.

Meanwhile, Turkish Prime Minister Binali Yildirim and Merkel held a phone conversation March 4 to defuse the crisis and agreed that Cavusoglu and Gabriel should meet this week to try to iron out differences.

Merkel did not let Erdogan’s “Nazi jibe” go without a response, though, saying there was "absolutely no justification" for such a comment. She said such comments trivialized the unfathomable suffering of those affected by Nazi crimes against humanity.

Merkel nevertheless said Germany would continue to allow Turkish politicians to campaign in Germany, provided their visits were announced in a transparent and timely fashion and respected German laws.

The anger on the Turkish side, however, does not appear set to abate anytime soon. Concerned about a public backlash, even Deniz Baykal — a veteran deputy from the main opposition Republican People's Party (CHP) — canceled a trip to Germany where he was going to speak against the proposed changes to the Turkish Constitution.

Erdogan and members of the government are also underlining the fact that while legitimate Turkish politicians are being prevented from speaking in Europe, the leaders of the PKK are allowed by many EU countries, including Germany, to address their supporters in Europe via satellite.

Erdogan went so far last week as to say that Germany should be tried for aiding and abetting terrorism.

Ilnur Cevik, who advises Erdogan on foreign policy matters, said Germany is trying to influence the course of the constitutional referendum. “Fethullah Gulen’s bandits and PKK terrorists have joined forces to influence German politicians and are using politicians who sympathize with these groups to undermine the referendum,” Cevik said.

According to a European diplomat, the root of the problem is in Turkey. “There is a bitter irony here. Erdogan — who is also promising to reinstate the death penalty — is accusing European governments of being undemocratic because he is not allowed to campaign in Europe for constitutional changes that will undermine Turkey’s already brittle democracy,” the diplomat told Al-Monitor on condition of anonymity.

Marc Pierini, a former EU ambassador to Turkey, believes that Ankara’s foreign policy continues to be determined by domestic priorities.

“Ankara’s foreign military operations and postures … and deliberate backtracking on progress toward EU membership are only parts of an internal power drive,” Pierini argued in a recent article for Carnegie Europe, where he is a visiting scholar focusing on EU-Turkey ties.

The continuing deterioration of relations between Turkey and Europe also belies Yildirim’s promise after he came to power in May 2016 to increase the number of Turkey’s friends and reduce the number of its enemies.

Turkey’s strained ties are not limited to Europe. Ankara has serious problems with countries in its region too, most notably Iran and Iraq, largely due to a sectarian rivalry along the Sunni-Shiite fault line. Ankara’s ties with Egypt remain in the doldrums because of Erdogan’s support for groups such as the Muslim Brotherhood and Hamas.

Doubts are also increasing in Ankara about Russian and US plans for the future of Syria, which seem to include giving the Kurds, which Turkey says are linked to the PKK, political representation in any final settlement.

Erdogan and the AKP government are clearly being driven by what appears to be a desperate need to get a "yes" vote in the upcoming referendum. Wagging the finger at the West and standing up to Shiite powers and politicians in the Middle East goes down well with the Islamist and nationalist electorate in Turkey.

Lacking the capacity to steer the course of events in Europe or the region, though, Turkey appears to be courting a new bout of international isolationism as Erdogan’s personal agenda continues to drive his political choices at home and abroad. His angry approach is also raising concerns about the style of his executive presidency should he get his way in the April 16 referendum.