Calculated tension: Turkey talks big to Europe but holds back from economic steps

Turkey’s flare-up with the Netherlands and Germany appears to be a policy of calculated tensions, aimed at maximum political gains with minimum damage ahead of a critical referendum in April. 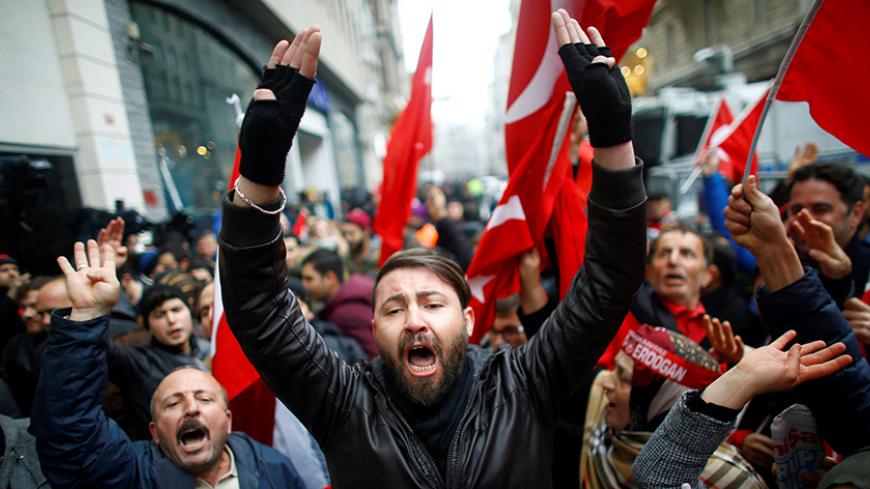 People shout slogans during a protest in front of the Dutch Consulate in Istanbul, March 12, 2017. - REUTERS/Osman Orsal

In 2012, Turkey and the Netherlands marked the 400th anniversary of their diplomatic ties. In April that year, Turkey’s then-President Abdullah Gul paid a high-profile visit to the Netherlands, where Queen Beatrix hosted a dinner to honor him in the royal palace. Speaking at the dinner, Gul praised the level of bilateral ties, stressing their multifaceted dimensions in the political, economic and cultural fields.

After the outbreak of the Syrian civil war, the Netherlands was among the three NATO allies to deploy Patriot air defense batteries at the Syrian border in response to Ankara’s request for support against possible attacks.

On April 1, Turkish-Dutch diplomatic relations will turn 405, but this time the anniversary is mired in an acrimonious crisis that erupted March 11 and escalated sharply to bring relations to the brink of a breaking point in just 48 hours.

So, how did it suddenly come to threats, insults and sanctions after centuries of close ties and friendship, symbolized by the tulips that traveled from the Ottoman Empire to the Netherlands to become a Dutch hallmark?

Turkey’s April 16 referendum, which will decide the fate of constitutional changes designed to hand sweeping executive powers to President Recep Tayyip Erdogan, is one of the core factors in the crisis. For Erdogan and the ruling Justice and Development Party (AKP), a “yes” outcome is of vital importance, and so are the votes of 2.2 million Turkish voters based abroad, mostly as immigrants with dual citizenship. The bulk of those voters — 1.4 million — are in Germany, while the Netherlands comes in third with 245,000 people. To lure the overseas vote, AKP ministers have sought to hold rallies and other campaign activities in European countries, setting the stage for tensions with reluctant hosts who have their own political woes and are already irked by Ankara’s policies.

The climate in the Netherlands was particularly sensitive as the country was heading to general elections on March 15, in which the rise of far-right leader Geert Wilders — a vocal advocate of anti-immigration and anti-Islam policies — was Prime Minister Mark Rutte’s primary concern.

It was in this charged atmosphere that Turkish Foreign Minister Mevlut Cavusoglu decided to go to the Netherlands for referendum campaigning, to which the Dutch government objected.

Similar tensions were already running high with Germany after local authorities shut down venues booked for rallies and speeches by Turkish ministers, including Cavusoglu, who was forced to address a small crowd in the residence of the Turkish Consulate in Hamburg. Much like their Dutch counterparts, Chancellor Angela Merkel and her government have been averse to AKP campaigning in Germany, where ultranationalist, xenophobic and anti-immigration forces are on the rise as well ahead of federal elections in September. The tensions shot up as Ankara accused Germany of Nazi practices, leading a top Merkel aide to raise the prospect of an outright ban on the entry of Turkish politicians as a “last resort.”

Irked by Ankara’s high-pitch rhetoric, the Dutch government canceled Cavusoglu’s flight permit hours before he planned to fly to Rotterdam on March 11. Family and Social Policies Minister Fatma Betul Sayan Kaya, who was in Germany and planning to cross to the Netherlands, was denied permission as well. Still, Kaya reached Rotterdam by car, insisting on addressing expatriates at the Turkish Consulate in the city. The Dutch police blocked her route to the building, and after a tense standoff she was declared persona non grata and escorted back to Germany.

Back home the following day, Kaya decried the Dutch attitude as an affront to the freedoms of assembly and expression, and charged that the Dutch police had treated her inhumanely as a woman.

Erdogan, for his part, called the Dutch “Nazi remnants” and “fascists” and vowed they would “pay a price,” further fueling the row. He leveled similar accusations at Merkel, who had lent support to the Dutch government, and urged Turkish expatriates not to vote for Merkel and Rutte.

Remarkably, Turkey has abstained from any economic sanctions against the Netherlands, which speaks of underlying concerns that such steps could further hurt the ailing Turkish economy. Much of Turkey’s foreign trade is with European Union countries. The Netherlands is the 10th biggest buyer of Turkish exports, while Dutch direct investments in Turkey are some of the largest, totaling $22 billion. Over 2,500 Dutch companies are active in Turkey, including global giants such as Shell, Philips, Unilever and ING Bank. Days before the crisis, Dutch energy giant Vitol concluded a deal to buy Turkey’s largest fuel distributor, Petrol Ofisi, for 1.368 billion euros ($1.47 billion).

About 79% of the over 300,000 Turks living in the Netherlands are dual citizens. Some 23,000 Turkish entrepreneurs with a total sales of $9 billion are active in the country.

Besides its major economic presence in Turkey, the Netherlands sends about 1 million tourists to Turkey every year. The tourism sector is likely to be the first to feel the fallout of the crisis, which comes at a time when travel agencies already report a 30% overall drop in bookings. Fears are rife that the latest rows will further deter European tourists.

Turkish opposition parties, meanwhile, have joined the government in denouncing the treatment of Turkish ministers, yet they allege that the AKP is knowingly orchestrating the crises. In their view, Erdogan and the AKP are seeking to create artificial tensions and enemies, both at home and abroad, in a bid to fan nationalist and Islamist sentiments ahead of the referendum, hoping that this will boost the “yes” vote.

A critical element here is the Nationalist Action Party (MHP), whose leadership has allied with the AKP but failed to rally its base behind the constitutional changes amid a bitter in-house schism. So by escalating nationalist and religious rhetoric, Erdogan and the government appear to aim at the MHP base, the majority of which is inclined to vote “no” at the referendum, according to opinion polls.

It is interesting, though, that Ankara has been harsher on the Netherlands than on Germany. Moreover, no Turkish minister has tried to challenge Austria, which has completely shut its doors. This seems to suggest a policy of calculated tensions, aimed at maximum political gains with minimum damage, in which the Netherlands is chosen as the essential target. And the substance of the sanctions against the Netherlands, which Rutte himself described as “not too bad,” suggest they have been outlined in a way to allow for a speedy normalization after April 16.