Turkish President Recep Tayyip Erdogan is fast ending the European dream following a weekend of serious disputes with the Dutch government over a pro-referendum rally in Rotterdam by Foreign Minister Mevlut Cavusoglu. 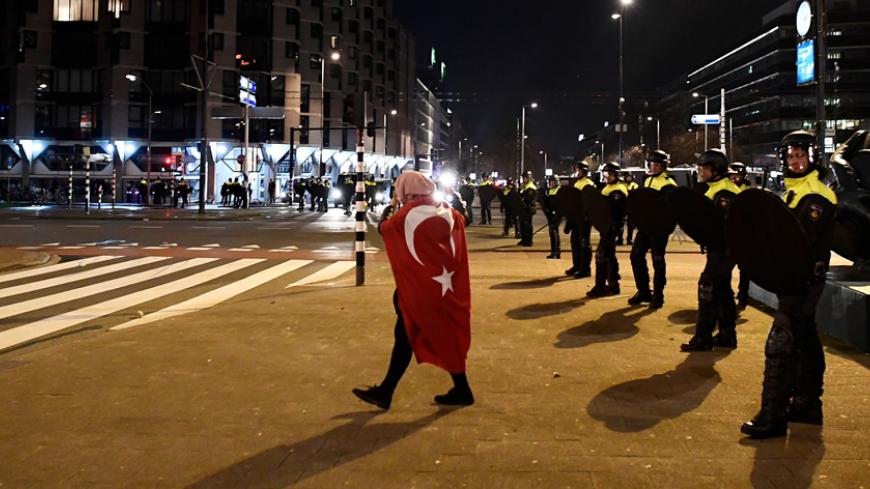 A demonstrator with a Turkish flag walks in front of riot police during clashes in the streets near the Turkish Consulate in Rotterdam, Netherlands, March 12, 2017. - REUTERS/Dylan Martinez

If Erich Maria Remarque, known for his masterpiece World War I novel “All Quiet on the Western Front,” were following developments in Turkey today, he would, perhaps, be inspired to write a piece titled “All Trouble on the Western Front.” Turkey’s age-old European vocation is jeopardized and undermined. The tension between Turkish President Recep Tayyip Erdogan and his faithful in Germany spilled over to the Netherlands and unprecedented developments occurred. Turkey’s relations with the European Union may have taken a fatal blow this month.

This time it was Turkish Foreign Minister Mevlut Cavusoglu's turn to be forbidden from holding a rally, in the Dutch town of Rotterdam. He was stubborn and took off anyway on March 11, but his plane did not get permission to land on Dutch soil. Erdogan was furious and hit back at Dutch officials, charging that they were “Nazi remnants and fascists”; he had accused Germany a few days earlier of "continuing with Nazi practices."

Dutch Prime Minister Mark Rutte immediately retorted and said Erdogan’s remarks were “crazy, of course" and "out of line.”

The tension between Turkey and the Netherlands further deteriorated the afternoon of March 11. Turkish Family and Social Affairs Minister Fatma Betul Sayan Kaya, who wears a headscarf symbolizing her religiosity or commitment to Islamism, and who was in Germany, announced she would be driving to the Turkish Consulate in Rotterdam to meet with the Turks who had wanted to hear Cavusoglu speak.

Subsequently, Dutch authorities put up a barricade near the Turkish Consulate and did not let anybody in, including Kaya, who arrived in the evening. After a few hours, she was escorted back to Germany. In the meantime, a crowd of a few hundred Turks waving Turkish flags mobilized outside the consulate and marched toward the barricades, throwing rocks at Dutch police when the protesters realized Kaya was on her way back to Germany. Around 2:30 a.m., Dutch riot police dispersed the crowd with dogs and water cannons and restored order to the city. Seven Turks were wounded and 11 demonstrators were detained.

The morning of March 12, the Dutch flag was replaced by the Turkish one at the Dutch Consulate in Istanbul, while some people shouted "Allahu akbar" ("God is great").

Erdogan lambasted the Netherlands once again and alleged that “Nazism is on the rise in the West.”

Kaya took to Twitter and protested the treatment she was subjected to, strongly accusing the Europeans of oppression and tyranny.

Some Turks were quick to respond, pointing to inconsistency and insincerity of the government she represents. The social media site Turkey Untold, which defines itself as monitoring Turkey's war crimes and human rights violations, wrote a tweet saying, “153 journalists, 13 elected MPs, 80 elected mayors, countless activists jailed in Turkey.”

Interestingly, one of the main protagonists of the dispute was the Muslim mayor of Rotterdam, Ahmed Aboutaleb, who said in a statement that the Turkish consul general in Rotterdam had "scandalously misled" Dutch authorities about the night's events and Kaya's visit to the city. He said the consul general had called for people to come to the consulate despite an area ban being in place.

Aboutaleb, who is a popular Dutch politician, is of Moroccan origin and a member of the Labor Party. I regularly visit Rotterdam and so I am closely aware of his standing in the city and the conditions of my Turkish compatriots who are not discriminated against. So, in this instance, Turkish leaders cannot use “Islamophobia” in regard to the city's mayor.

The Netherlands is about to witness a fateful election, on March 15, with Geert Wilders — the ultranationalist, Islamophobe advocate of "Nexit" (the Netherlands leaving the EU) — currently on the heels of the prime minister in the polls. Wilders gladly took advantage of the dispute with Turkey in order to legitimize his quasi-racist policies. Rutte, who represents the liberal People's Party for Freedom and Democracy, and Foreign Minister Bert Koenders, who is a Dutch socialist from the Labor Party, can not be considered anti-Turkish or Islamophobe and should certainly not be called “pro-Nazi” or “fascist.”

This diplomatic crisis began earlier in the week when Rutte had said a visit to the Netherlands by Cavusoglu could only cause trouble between the two NATO allies. While attending a EU summit March 9, Rutte said, "This is the most serious thing we can do. You tell the foreign affairs minister of a NATO ally, 'We know you will come to the Netherlands: Don't show up!'"

Koenders had qualified Cavusoglu’s planned visit as "undesirable" and had said the Dutch government would not provide the customary assistance if he would visit. He said that the government "is responsible for public order and security of Dutch citizens, nobody else. That is why the Netherlands does not want this to happen."

On March 10, Aboutaleb said that he would likely ban a rally by Cavusoglu on the grounds of public order, due to tensions in the city's Turkish community.

For the first time in the history of the Republic of Turkey, a Turkish minister was deported and its foreign minister treated as persona non grata by an allied country — an unprecedented humiliation for the Turkish government. In fact, in the many centuries of Turkey's imperial history and problematic relations with the Western world, this has not happened.

So why did this happen now? In today’s Turkey, Erdogan's foreign policy does not prioritize relations with the EU in order to obtain full EU membership. EU membership had been the mainstay of Turkish foreign policy since the late 1950s, when the foundations of the EU were laid.

Turkish foreign policy is subservient to the internal agenda of Erdogan, who is fully focused on April 16, the date of the fateful referendum on the constitutional amendments that would transform him from de facto “leader” to a kind of de jure “sultan-president."

In recent weeks, the possibility of the rejection of his bid has become more likely than ever before. The “no” votes are outnumbering the “yes” votes in most of the polls — an outcome that Erdogan cannot afford politically and psychologically. He is desperately campaigning for a “yes” vote, and he needs the votes of the Turks in Europe to this end.

On Nov. 1, 2015, when the Turkish electorate gave Erdogan a very strong mandate to rule with 50% of the vote, his support in Germany among the Turkish voters was 10% higher, at 60%.

Erdogan is now desperately trying to move his campaign to Europe, all the while knowing that this would upset the apple cart in EU countries already unhappy about his anti-democratic practices and Turkey's drift to autocracy. Yet he is the one who claims to be championing democracy and accusing the Western European countries — Germany and now the Netherlands — of Nazism and fascism.

Rutte called Erdogan’s accusations “bizarre and unacceptable,” and Aboutaleb took offense and said, “We have been compared to Nazis. I wonder if they know that I am mayor of a city that was bombed by the Nazis."

As long as the Turkish leadership is committed to disengage Turkey from Europe and the EU, none of this is important. Deputy Prime Minister Nurettin Canikli said in regard to the Turkish-Dutch crisis, “The dream of the European Union has ended and the downfall has started. Britain left the EU not to remain under the debris.”

The deputy chairman of the ruling Justice and Development Party, Yasin Aktay, said the crisis is not between Turkey and the Netherlands, but reflects the inner crisis of the EU and Europe. Without elaborating on how and why, he noted, “For us, Europe and the EU are over.”

The controversy with Europe might be a necessary ingredient for Erdogan’s goal to consolidate his Islamist-nationalist support in Turkey, and a nice gesture to his friend Russian President Vladimir Putin — but whether it is enough to secure a “yes” vote remains to be seen.

The inevitable consequence of the quarrel with Germany and the Netherlands, and to some extent Austria, is that going forward, it will be even more difficult than before to be a Turk in Europe.

"With the current Turkish attacks on Holland, the meeting cannot be seen separated from that. I have therefore proposed to my Turkish colleague that the meeting be postponed," Rasmussen said in a press statement.

Yildirim was scheduled to speak in Denmark on March 20.