While 40 Dutch cows have been expelled by Turkey and are on their way to the Netherlands, Turkish hackers attacked the Twitter accounts of international organizations and celebrities. 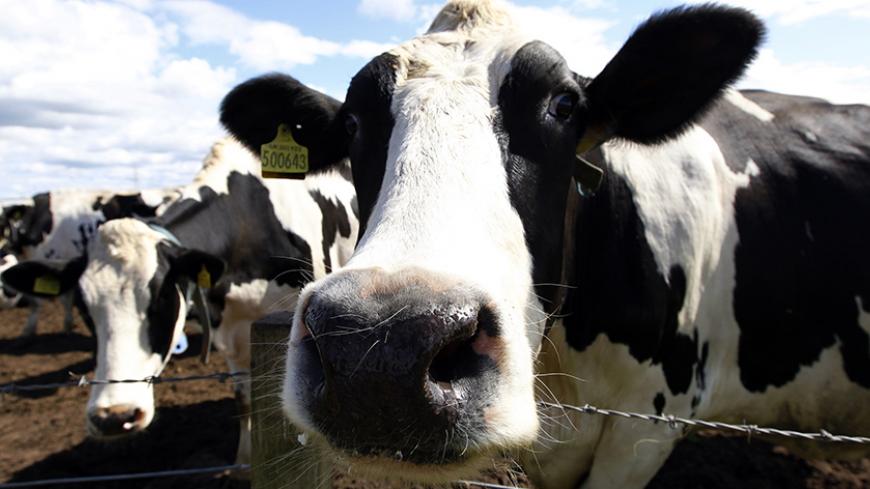 Holstein cows stand in a field at a farm near Nairn in northern Scotland, Aug. 4, 2010. - REUTERS/David Moir

Turkey’s ongoing spat with the Netherlands is fast descending into the absurd. Members of Turkey’s Association of Red Meat Producers loaded 40 Dutch Holstein cows onto a truck and sent them packing to Holland to protest Dutch authorities' refusal to allow Turkish officials to campaign on Dutch soil for the constitutional referendum that would further empower Turkish President Recep Tayyip Erdogan.

Bulent Tunc, the association's president, told the mass circulation Hurriyet, “We sent a symbolic number of animals. If they [the Dutch] do not accept them, we will slaughter them and give away [the meat].”

In another burst of patriotism, Istanbul’s city council axed its “sister city protocol” with Rotterdam. The Dutch port city was host to much of the drama that unfolded over the weekend, with Dutch police clashing with Turkish protesters outside the Turkish Consulate on the evening of March 11. Turkish Family Affairs Minister Fatma Betul Sayan Kaya, who arrived by car, was barred from entering the consulate and deported back to Germany.

The action against Rotterdam followed on orders from Erdogan, whose unremitting push to expand presidential powers will be put to a referendum on April 16. He told a rally in the western province of Afyon, “[I]t is impossible for us to be sister cities with such people.”

Members of Erdogan’s ruling Justice and Development Party (AKP) announced that they would be pulling out of the parliament’s Turkish-Dutch friendship group today. AKP deputy Mustafa Elitas said his colleagues would not return until the Netherlands formally apologized.

Turkey has also apparently carried the battle to Twitter. Amnesty International, UNICEF USA and BBC North America announced that their Twitter accounts had been hacked by attackers claiming to be acting in support of the Turkish government.

The cyber thugs tweeted language Erdogan used to describe the Dutch and Germans, including “Nazi,” and posted “See you on April 16” on some of the targeted accounts. Other victims included the World Meteorological Organization, transport giant U-Haul and former German tennis star Boris Becker. The hackers also posted swastikas, Turkish flags and hand emojis hashtagged “Ottoman slap.” Twitter issued a statement announcing that the offending accounts had been disabled.

European leaders have reacted angrily to the slurs by Turkey. European Council President Donald Tusk told the European Parliament today that accusations of parallels with the Nazis were “unacceptable.” He stated, “Rotterdam … totally destroyed by the Nazis, which now has a mayor born in Morocco: If anyone sees fascism in Rotterdam, they are completely detached from reality.”

Meanwhile, Turkish Minister of European Union Affairs Omer Celik suggested in an interview with Reuters that Ankara might shelve an agreement with the EU under which Turkey has pledged to hold back millions of Syrian and other refugees trying to make their way to Europe. In exchange, Turkey was supposed to receive billions of euros and Turkish citizens visa-free travel to the EU.

The Europeans are also demanding, however, that Turkey rescind anti-terrorism laws that have been used to jail tens of thousands of people in recent months, including 150 journalists, making the country the world's top jailer of journalists. Citing emergency conditions in the wake of the failed July 15 coup, Ankara is refusing to do so. The latest dustup makes visa-free travel for Turks an ever-more-distant dream.

The European Commission, which has already coughed up $826 million to help Syrian refugees in Turkey, somewhat improbably maintains that it continues to be committed to the deal. Just as improbably, Celik insists that recent events will not hurt business ties with the Netherlands. In an interview with Reuters he said, “The private sector, business world, tourists and the people of the Netherlands are not a part of the crisis.”

Turkish Prime Minister Binali Yildirim, whose family allegedly owns a fleet of ships and several companies registered in the Netherlands, will have welcomed Celik's words. Baris Yarkadas, a lawmaker for the main opposition Republican People’s Party, filed a petition in parliament demanding that Yildirim respond to claims that his son, Erkan, owns 30 ships and holds a 50% stake in the Dutch company Q-Shipping.

The Netherlands is the biggest foreign investor in Turkey, accounting for $22 billion, or 16%, of total foreign direct investment. Turkish exports to the Netherlands totaled $3.6 billion last year, making it Turkey’s 10th biggest market. The steady erosion of civil liberties and the rule of law coupled with mounting political instability are scaring away a growing number of foreign investors.