Turkish pop star Mabel Matiz is the latest public figure under investigation after he had the misfortune to appear in a music video with one-dollar notes, which the government claims Gulenists use as a secret messaging system. 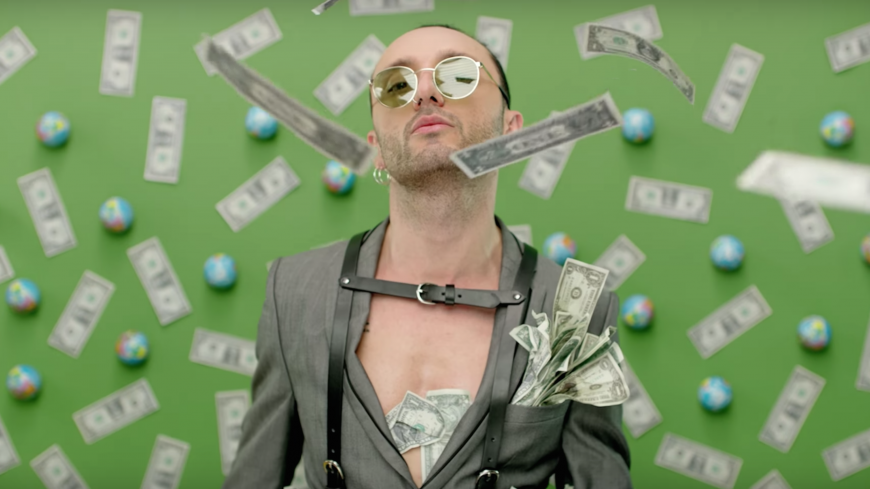 Prosecutors are investigating a Turkish pop singer and champion of gay rights for alleged links to Fethullah Gulen, the Sunni cleric accused of being at the center of the failed attempt to bloodily overthrow Turkish President Recep Tayyip Erdogan in July 2016, pro-government Sabah reported today.

The probe was prompted by a video clip in which Mabel Matiz is seen writhing to the rhythm with dollar bills stuffed in his jacket. It’s the dollars, not the lyrics of the chart-topping “Ya bu ne isler?” ("What’s going on?") that landed him in trouble.

The government claims that single dollar bills, particularly those marked with a serial number starting with the letter “F,” were part of a secret messaging system used by the coup plotters. Hence possession of them is proof of culpability. Matiz denied the charges.

Nearly half a million people have faced investigation over alleged links to the so-called Fethullah Terrorist Organization “FETO” since the abortive coup. More than 90,000 have been jailed for crimes such as teaching in Gulen-affiliated schools or holding an account in the Gulen-linked Bank Asya, which has been shuttered.

Possession of six single-dollar notes was used against prominent economist and writer Mehmet Altan, who was sentenced to life long imprisonment for his alleged role in the putsch. Altan was freed in June pending trial but his brother, best-selling novelist Ahmet Altan, remains behind bars serving a life sentence for the same alleged crime.

The Altans, along with jailed veteran columnist Nazli Ilicak, are accused of having prior knowledge of the coup. They supposedly gave themselves away by predicting that one might happen during a live television program the night before the failed takeover. Prosecutors scented complicity and claimed it was subliminal messaging to Gulen’s followers to take action, not prescient analysis.

Turkey’s government is shunning Europe’s biggest human rights conference, which kicked off Monday in Warsaw, after its demands that non-governmental organizations, namely Gulen-linked groups, be barred were rejected.

The United States’ Helsinki Commission, a government agency monitoring human rights in the 57 members of the Organization of Security and Cooperation in Europe, which is sponsoring the event, tweeted that Turkey was the only country boycotting it “because it insists on having the ability to veto NGOs wishing to participate.”

The Turkish government stormed out of last year’s gathering when Gulen-friendly delegates showed up.

In a related development, on Monday a Turkish court of appeals rejected a petition to free Enis Berberoglu, a member of parliament for the pro-secular main opposition party also being held over his alleged links to FETO. Berberoglu, a former journalist, argued that he had regained immunity from prosecution after being re-elected in the June 24 elections. Berberoglu has been held since June 2017 on charges of espionage and revealing state secrets for his alleged role in passing what the government says is doctored footage of weapons being transported to jihadis in Syria by Turkey’s national intelligence agency MIT to the pro-secular newspaper Cumuriyet. Berberoglu denies all the charges.

In October, an Istanbul court reversed a 25-year sentence being sought for Berberoglu on procedural grounds. In February, the Court of Appeals reduced his sentence to five years and 10 months and dropped the espionage charge. But legal hell continues for Berberoglu, whose case is being closely observed by the European Union. In February, Istanbul’s top prosecutor demanded that the spying charges be reapplied.

The case of Osman Kavala, an acclaimed Turkish philanthropist and businessman who has been sitting in jail for 315 days without being indicted, is also drawing censure from across the globe. The notion that Kavala might be linked to the coup, the charge on which he was arrested, sounds absurd, wrote Harvard economist Dani Rodrik in an op-ed for The New York Times.

Kavala was among the fiercest critics of prosecutors with alleged links to Gulen, who are believed to have sexed up and in some cases outright manufactured evidence in the 2008-2010 trials of hundreds of military officers jailed on coup plotting-charges. The cases have since been dropped and the officers absolved. The unremitting vilification of Kavala by the pro-government Turkish press suggests that Turkey’s best known ambassador for culture and human rights may not be so lucky.