At least 50,000 people have been jailed in Turkey since the 2016 coup attempt and there are plans to build 228 new prisons over the next five years to make room for more. 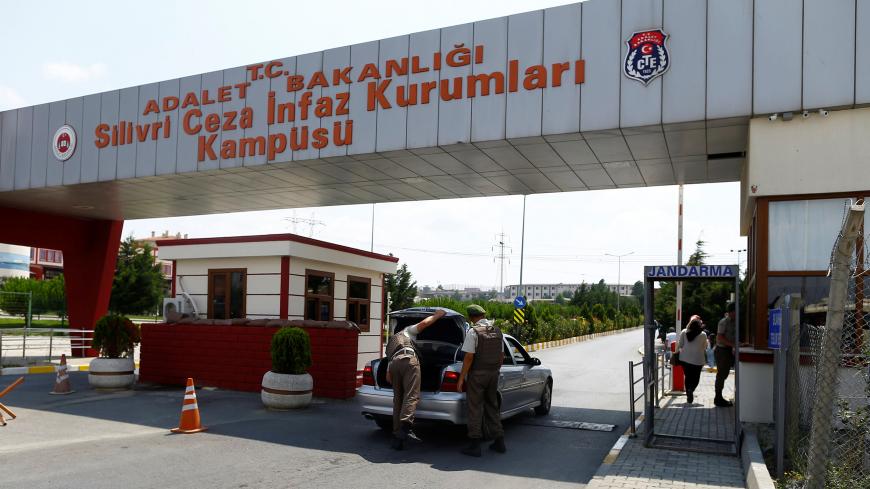 International Human Rights Day is getting grimmer by the year in Turkey. At least 50,000 people have been jailed since last year’s attempted coup on July 15. Well over 150,000 have spent time in police custody since a continuing state of emergency was declared in its wake.

The number of detainees is swelling at such a dizzying rate that authorities will have to build 228 new prisons over the next five years to make room for them.

More often than not, the cases are politically motivated.

Take that of prominent philanthropist Osman Kavala, who is an ardent champion of human rights and peace with Kurds and Armenians as well as a big-hearted patron of refugees and the arts. The European Parliament called him a “bridge-builder, a man of dialogue and reconciliation.” Kavala has been sitting in a Turkish jail for the past 42 days in pre-trial detention for supposedly helping to orchestrate the coup together with respected US academic Henri Barkey and long-retired CIA operative Graham Fuller. Turkey has issued arrest warrants for both based on fabricated evidence.

Yesterday, an Istanbul prosecutor demanded life sentences for brothers Mehmet and Ahmet Altan, counted among the country’s top intellectuals, and Nazli Ilicak, a feisty septuagenarian female journalist hailing from the Istanbul elite, all for alleged involvement in the botched takeover. None has committed any act of violence, nor did they incite any, in writing or otherwise. Yet they are deemed to be members of the so-called Fethullah Gulen Terror Organization (FETO), formed by the followers of Fethullah Gulen, the Pennsylvania-based Turkish imam who Turkey says masterminded the putsch.

As of today, there are at least 146 journalists behind bars in Turkey, according to the Turkish Journalists’ Association. That’s more than in Iran, China or Russia, which have long been the worst oppressors. Deniz Yucel, a Turkish-German reporter whose incarceration over his alleged links to the outlawed Kurdistan Workers Party has made him a cause celebre in Germany and strained ties with Berlin, was allegedly beaten by prison guards in a dark stairwell.

For Cem Kucuk, a columnist for the pro-government Yeni Safak, who frequently calls for jailing government critics, torture is apparently de rigeur. In remarks during his regular TV show this week he suggested Gulenist inmates ought to be subjected to harsher interrogation techniques in order to extract confessions. "Hang them out of the window by their legs," he proposed.

In October, Human Rights Watch announced that it had documented at least 11 cases of serious abuse in detention. The violations included beatings and sexual assault of prisoners whose access to lawyers is frequently denied. Several hundred lawyers are in pre-trial detention themselves, investigated for terrorism charges. Emma Sinclair-Webb, the advocacy group's gutsy Turkey director, told a panel in the mainly Kurdish city of Diyarbakir over the weekend that Turkey's ongoing state of emergency was aimed at "building an empire of fear."

Turkey’s Human Rights Association offered an even darker assessment, saying that at least 2,278 people were tortured and 11 others “disappeared” between January and November this year.

But Turkish President Recep Tayyip Erdogan insisted in his Human Rights Day message delivered over the weekend, "Respect for human rights based on the principles of equality and non-discrimination of individuals before the law is the irreplaceable nature of the Republic of Turkey."

Ibrahim Halil Baran, the leader of an obscure Kurdish nationalist grouping who was detained in the southeastern city of Urfa on Jan. 11 and freed on April 11 pending trial on charges of disseminating terrorist propaganda and insulting Erdogan, begged to differ. He declared on Monday, "I was tortured for 13 days. There is systematic torture in Turkey. The two lower levels of the Urfa counterterrorism headquarters is a torture center. I can identify the police who tortured me."

Sezgin Tanrikulu, a prominent human rights defender and opposition lawmaker, reckons that between 2002 and 2017 — during the 15 years Erdogan’s Justice and Development Party has been governing alone — at least 18,762 people suffered torture and ill-treatment and that at least 482 journalists were arrested. In a report detailing the abuses unveiled this week, Tanrikulu claimed that at least 15 people accused of links to FETO have committed suicide since the attempted coup.

Some 11 of Tanrikulu’s fellow parliamentarians are currently in jail on thinly supported terror charges. Among them are Selahattin Demirtas and Figen Yuksekdag, the co-chairs of the pro-Kurdish People’s Democratic Party, the third biggest in the chamber.

Then there’s the sacking of well over 100,000 judges, prosecutors, police officials, academics and scores of popularly elected mayors. The overwhelming majority — some 93 at the last tally — are Kurds. And so the grisly count continues.