The European Court of Human Rights ruled that Turkey should pay $18,000 to political commentator and former lawmaker Nazli Ilicak for violating her rights. 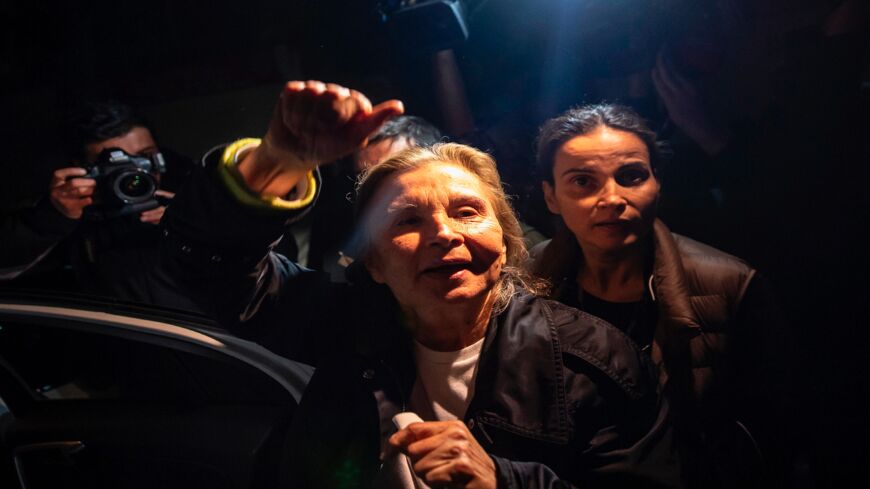 Turkish journalist Nazli Ilicak waves after being released from Bakirkoy women's prison on Nov. 4, 2019, in Istanbul. Ilicak was accused of links with the July 2016 coup attempt. - YASIN AKGUL/AFP via Getty Images

The European Court of Human Rights ruled Tuesday that Turkey should pay 16,000 euros ($18,105) to a journalist in damages over violating her freedom of expression and right to liberty.

Nazli Ilicak, a political commentator and former lawmaker, had been arrested 10 days after the 2016 attempted military coup in Turkey. She was charged with attempting to overthrow Turkey’s constitutional order and government and of committing offenses on behalf of the Fethullah Gulen Terrorist Organization, or FETO, the crime gang of US-based cleric Gulen accused of staging the coup. Following a complicated, sometimes Kafkaesque legal case that went back and forth between Assize Court and the Court of Cassation, Ilicak was finally sentenced in 2019 to eight years and nine months for voluntarily aiding FETO without being part of its hierarchical structure. The court also decided on her release from prison under judicial supervision because she had already spent 1,197 days behind bars, including a pre-detention period that the European Court found violated the European Convention of Human Rights, to which Council of Europe-member Turkey is a signatory.

On April 14, 2021, the Court of Cassation again overturned Ilicak’s conviction. The criminal proceedings are still ongoing.

The Strasbourg-based court said that there had been “no plausible reason” to suspect Ilicak belonged to a terrorist organization or attempted to overthrow the government or hinder its functioning. The articles and the tweets she penned “reflected the applicant’s views on current political events — in particular the attempted coup — expressing value judgments or criticisms of various government actions,” the ruling said.

The court also took the view that the fact that she was working for a media outlet, which had been completely legal at the time, could not be equated with the membership of a terrorist organization.

It also took the view that the pre-trial detention measures, meaning the criminal proceedings against her that were directly related to her work as a journalist, constituted an “interference” with her right to freedom of expression. The Turkish judge, Saadet Yuksel, voted against the ruling in both cases.

The rulings of the court are binding on all Council of Europe members, but Turkey has ignored its 2019 call to release jailed businessman and philanthropist Osman Kavala.

This has led the Council, Europe’s democracy and human rights-promoting body, to initiate a rare disciplinary process against Turkey, which may go as far as withholding Turkey’s voting rights and suspending its membership, severing one of Turkey's ties to Europe. Kavala, who has spent four years behind bars, is accused of funding nationwide anti-government protests in 2013 (the Gezi protests) and helping orchestrate a coup attempt three years later. He denies the charges, which carry a life sentence without the chance of parole.

Turkey’s Foreign Minister Mevlut Cavusoglu, addressing parliament on his ministry’s budgetary debate late Monday, accused the Council of Europe of “hypocrisy” in insisting that Turkey did not release Kavala.

“We carried out the decisions of the European Court of Human Rights. We acquitted and released him, but then he was arrested on other charges,” he said.

Kavala was acquitted in February 2020 of charges in connection with 2013’s Gezi protests. Mere hours after his release, the ruling was overturned and he faced charges relating to the 2016 coup attempt.