Osman Kavala was re-arrested after his acquittal despite the European Court of Human Rights' call for Turkey to immediately release the philanthropist. 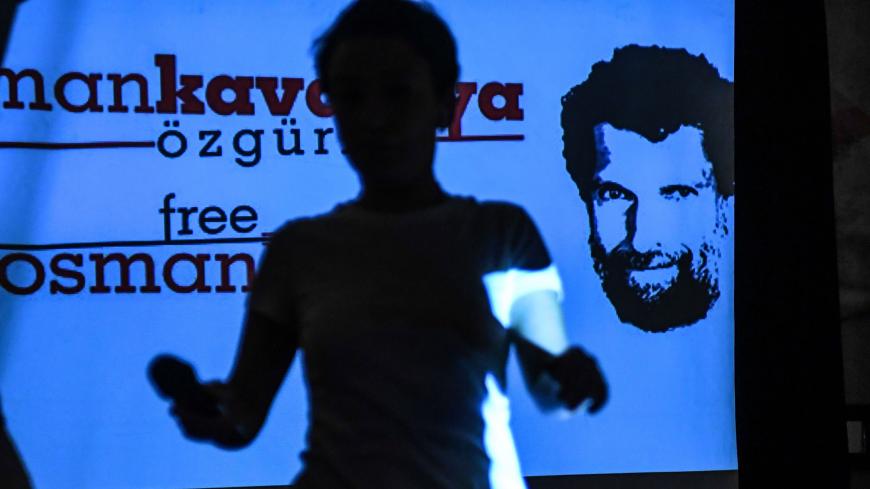 A woman passes in front of a screen featuring jailed businessman and philanthropist Osman Kavala during a press conference with his lawyers, Istanbul, Turkey, Oct. 31, 2018. - OZAN KOSE/AFP via Getty Images

An Istanbul court acquitted Osman Kavala, a prominent Turkish philanthropist, on charges related to Istanbul's Gezi Park protests Feb. 18 only to have a prosecutor order his re-arrest soon after. Kavala had already spent 840 days in jail.

The decision to release Kavala was surprising, but his re-arrest came as a bigger shock, even for close observers of the trial.

Prosecutors had sought a life sentence without parole for Kavala for his alleged attempts to overthrow the government by masterminding the impactful Gezi protests in 2013. According to the prosecutors, Kavala financed and orchestrated the protests.

The same Istanbul court had refused several demands for Kavala's release, including one from the European Court of Human Rights (ECHR).

In Turkey's current political climate, no judicial authority would dare release Kavala so easily, as President Recep Tayyip Erdogan has personally targeted him, accusing him of being an agent of Hungarian-American billionaire George Soros.

Many in Turkey argued that the philanthropist’s acquittal was an attempt to evade the ECHR call. Yet the Council of Judges and Prosecutors, which oversees Turkish judges and prosecutors, launched a probe against the judges who acquitted Kavala, which complicates this narrative.

Erdogan also took aim at the judges. “The person that you know stirred up trouble at Gezi was behind bars. They attempted to acquit him with a trick,” he said Feb. 19, the day after the verdict.

Ahmet Sik, a lawmaker from the pro-Kurdish Peoples’ Democratic Party, shared his analysis of the situation on Twitter. According to Sik, both Kavala’s acquittal and re-arrest were a reflection of Erdogan's will.

​According to the lawmaker, a clique among the Justice and Development Party (AKP) ranks convinced Erdogan that Kavala’s acquittal could improve relations with the West. But, when a victorious sentiment emerged among dissidents following the verdict, it weakened the strong image of Erdogan, paving the way for the re-arrest.

All these developments, however, have created a self-fulfilling prophecy. The ECHR ruled in December 2019 that Turkey had “pursued an ulterior purpose” and tried to silence human rights defenders by arresting Kavala without “reasonable suspicion.” Kavala’s arrest, according to the ECHR, was a violation of human rights.

Floris Tan from Leiden University warns in an article that a violation of Article 18 functions as an early warning that European states are at risk of becoming an illiberal democracy.

Thus, the ECHR found that Turkey is abusing its legal system to punish dissent.

What comes next can be understood by looking at the case of Ilgar Mammadov, an Azerbaijani politician and activist. He was arrested in February 2013 on charges of inciting mass violence, after traveling to report on street riots in northwest Azerbaijan. The ECHR reviewed his case in 2014. In December 2017, the Committee of Ministers of the Council of Europe launched infringement proceedings against Azerbaijan. In March 2019, Mammadov was freed on probation.​

In that case, the court found that Mammadov was jailed on trumped-up charges to punish his human rights activism. In spite of the ECHR's findings, Azerbaijan refused to release him.

Turkey may face a similar fate if the Committee of Ministers follows a similar track in the case against Kavala.

Turkey’s 70-year membership in the Council of Europe may come under question as the country awaits acceptance into the European Union.