Following a Turkish court’s decision to keep philanthropist Osman Kavala behind bars, the ball is now in the court of the Council of Europe, whose committee of ministers will decide next month whether to start a disciplinary process against Turkey. 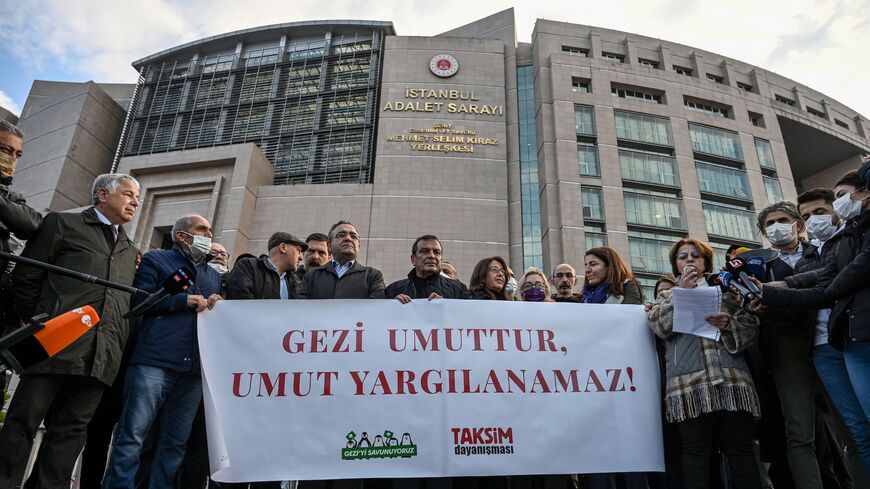 Supporters including lawyers and opposition lawmakers of jailed civil society leader Osman Kavala gather behind a banner reading in Turkish "Gezi is hope, Hope cannot be judged!" outside an Istanbul courthouse on Nov. 26, 2021. - OZAN KOSE/AFP via Getty Images

A Turkish court ruled Monday to keep Turkey’s top philanthropist behind bars, despite a looming disciplinary process from the Council of Europe (COE) that may eventually lead to suspending Turkey’s membership from the pan-European organization.

The court’s Jan. 17 ruling that Osman Kavala, a businessman and the founder of nonprofit cultural institution Anadolu Kultur, must stay in detention means that Ankara has passed on what Western politicians and rights advocates called its “final chance” before the COE formally starts its rarely-used infringement process against Ankara.

The eyes are now on the COE’s committee of ministers on Feb. 2, when the representatives of the 47-member bloc will vote on whether to take action against Turkey for failing to comply with the European Court of Human Rights (ECHR) ruling to release Kavala.

The Council of Europe Committee of Ministers gave Turkey a final chance to release Osman Kavala & restore his rights before its Feb 2 session at which it will send case back to the European Court starting infringement proceedings. At the hearing today Kavala must be released pic.twitter.com/BpF9E3yHMe

The court’s decision to keep Kavala behind bars has drawn wide reactions both at home and abroad on Tuesday. “We know full well that there is no justice in Turkey,” Kemal Kiliçdaroglu, the leader of the main opposition Republican People’s Party (CHP), said in parliament on Jan.18. “The fact that Kavala has spent 1,541 days in prison is the top judicial problem of Turkey.”

Kavala, whom Erdogan called a “Soros leftover” (a reference to Kavala’s position on the board of the Turkish chapter of the Open Society Foundations funded by financier George Soros) has been held in prison without conviction since October 2017 for allegedly financing the 2013 anti-government Gezi protests and conspiring with US-based Muslim cleric Fethullah Gulen in engineering the unsuccessful 2016 coup.

In February 2020, he was acquitted of charges related to the coup and freed from the maximum-security Silivri prison on the outskirts of Istanbul. Mere hours later, however, Istanbul’s chief prosecutor ordered his continued detention on charges stemming from a separate case. His current trial is a merged case of conspiracy, espionage and undermining the state and involves 51 other defendants, including fans of the Besiktas soccer club and journalist Can Dundar, who has fled Turkey. Kavala is the only jailed defendant.

“Combining unrelated charges and creating a legal muddle has become one of the judicial tools of the government to stifle opposition and keep critics behind bars for years,” said Gunal Kursun, a human rights lawyer and lobbyist who has been under trial in the infamous Amnesty International Buyukada case that targeted Turkey’s human rights advocates.

Kavala has become the symbol of Turkey’s democratic backsliding and a constant point of tension between Turkey and its Western allies. In October, Turkey turned from the brink of one of its largest diplomatic crises in 20 years of Erdogan rule, after Ankara threatened to expel 10 ambassadors, including the envoys of the United States, France and the Netherlands, which called on Turkey to release Kavala.

In December, the COE’s committee of ministers served a formal notice to Ankara that it would initiate a rarely used disciplinary process against Turkey unless Kavala was released and charges against him dropped before the ministerial committee’s next meeting in Jan. 2. ECHR, the court of law of the Council of Europe, ruled in 2019 that Kavala's rights had been violated and urged Turkey to release him, but Turkey ignored the calls.

By failing to free Kavala, Turkey refuses “to abide by the ECHR final judgment, which it is obliged to implement under the Article of the European Convention on Human Rights," read the interim decision made by the COE ministers on Dec. 2. The decision, which needed a two-thirds majority (32 member states), was upheld by 35. Turkey, Hungary and Azerbaijan, which had also faced an infringement procedure in 2017, voted against it. Others, such as Russia, Georgia, Romania, Poland, Ukraine and Albania abstained or did not participate in the voting, according to Turkey’s ANKA news agency.

The committee of ministers asked Turkey to submit its view on the Kavala case on Jan. 19 in what was interpreted as a grace period to Turkey should Ankara decide to release Kavala in the first hearing of 2022. On Jan. 16, Erdogan came together with the European Union’s ambassadors in Ankara, telling them that Turkey’s accession to the bloc continued to be Ankara’s priority and called for “bold moves” from both sides in 2022 to improve bilateral ties, raising hopes that an unexpected release may be in the cards.

After this meeting, “some analysts in Turkey and in Europe were hopeful that Kavala would be released, but I was not one of them,” Kursun told Al-Monitor. “Erdogan’s strategy is to keep Kavala as a political prisoner. If the Council of Europe launches the infringement process against Turkey, Erdogan will use this as an example of external forces that do not respect Turkey’s sovereignty and seek to undermine Turkey politically and economically.”

Once Turkey submits its views by Jan. 19, then the ball will be on COE’s court. “The committee will subsequently decide whether to refer this case to the ECHR at its regular meeting on Feb. 2,” Andrew Cutting, a spokesman for the council, told Al-Monitor.

If the committee of 47 can get the two-thirds majority to refer the case to the ECHR and if the court subsequently finds that Turkey had failed to fulfill its obligation to implement the ECHR’s initial judgement, the ministers committee would decide what steps to take as a result, bearing in mind the specific circumstances of the case, the court’s findings and the applicant’s situation at that time.

“It is not possible to speculate what those steps might be,” Cutting said. COE experts and lawyers maintain that procedures against Turkey could last months, but could ultimately see Turkey lose its voting rights or even ending up with its membership suspended. But the territory is relatively unchartered for the Council of Europe.

“It was created in 2010 and has been launched only once — against Azerbaijan.”

Barcin Yinanc, a foreign policy analyst and a columnist for T24, said that in the current political atmosphere, Erdogan simply does not see sufficient incentive to release Kavala. “The infringement process is a lengthy one, which gives Erdogan, a master of political brinkmanship, to decide when or if he will release Kavala,” she told Al-Monitor. “On the other hand, the continued detention of Kavala has a chilling effect on all the critics and business circles in Turkey, particularly as elections approach. If Kavala — wealthy, well-connected and obviously innocent — can be kept in jail for more than four years, what choice do you have but to keep your voice down, refrain from criticism and keep a low profile?”

Yinanc, a seasoned diplomatic observer, says that the current situation puts Turkey’s Foreign Ministry, whose career diplomats are acutely aware of the importance of Council of Europe membership, in a tough spot. “The ministry seems unable to persuade Erdogan that releasing Kavala would be a quick win in Turkey’s faltering ties with the West,” she said.

According to a diplomatic source in Ankara, Turkish diplomacy is currently working to get as many COE member states to vote on the side of Turkey or at least abstain from pushing forward the infringement process. In the meeting on Dec. 3, several EU members such as Hungary, Poland and Romania either voted against the infringement or abstained and the vote passed with a mere 32, according to diplomatic sources. If Turkey can persuade at least four others, particularly those seen as part of “illiberal” EU or non-EU members, to vote against the infringement or to abstain, it may nip the process in the bud.