Turkey’s Foreign Ministry summoned the ambassadors of the United States, Germany and France, among others, after they called for the release of Osman Kavala, a Turkish philanthropist jailed over four years without conviction. 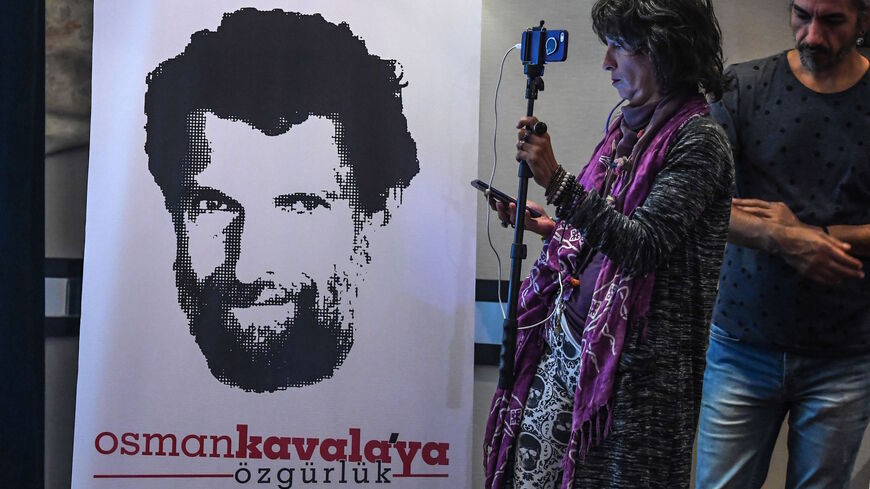 A journalist stands in front of a poster featuring jailed philanthropist Osman Kavala during a press conference of his lawyers on Oct. 31, 2018. - OZAN KOSE/AFP via Getty Images

On Monday, the fourth anniversary of Kavala’s detention without conviction, the embassies of the United States, Canada, France, Finland, Denmark, Germany, the Netherlands, New Zealand, Norway and Sweden published a statement critical of the prominent civil rights activist’s continued imprisonment despite a 2019 European Court of Human Rights (ECHR) ruling for his immediate release.

“The continuing delays in his trial, including by merging different cases and creating new ones after a previous acquittal, cast a shadow over respect for democracy, the rule of law and transparency in the Turkish judiciary system,” the joint statement read.

In response, Turkey’s Foreign Ministry summoned the signing nations’ ambassadors in Ankara Tuesday to protest what it considered meddling in Turkey's domestic affairs, releasing its own statement saying it “rejected” the attempt to “politicize judicial proceedings and put pressure on Turkish judiciary.”

“Turkey is a democratic country governed by the rule of law that respects human rights, and it was reminded that the Turkish judiciary will not be influenced by such irresponsible statements,” the statement read.

Turkish Interior Minister Suleyman Soylu also responded Monday evening on Twitter, saying Turkey was a democratic state and that the ambassadors’ statement “cast a shadow on [their] understanding of law and democracy.”

Kavala, 64, is charged with espionage and attempting to overthrow the Turkish government by allegedly financing the 2013 Gezi Park protests in Istanbul that sparked nationwide demonstrations that year. He is also facing trial for alleged involvement in a 2016 coup attempt. Kavala denies all charges.

Turkish President Recep Tayyip Erdogan has called Kavala the “red Soros of Turkey,” likening his civil society work to that of Hungarian-American philanthropist George Soros, while human rights defenders say Kavala’s ongoing detention is among the most emblematic of Turkey’s post-coup crackdown on dissent.

Milena Buyum, Turkey campaigner for Amnesty International, said Monday’s statement by 10 diplomatic representations calling on Turkey to implement the ECHR decision “is important and highlights yet again that Osman Kavala’s ongoing baseless and arbitrary imprisonment is the litmus test for Turkey abiding by its international human rights obligations.”

In December 2019, the ECHR ruled Kavala’s detention was primarily political with aims to silence government opponents and called for his immediate release. To date, Turkey’s judiciary has not complied with the ECHR decision.

On Sept. 17, the Council of Europe said it would vote on whether to start infringement proceedings against Turkey, a member state, if Kavala is not released before its next Committee of Ministers meeting in late November.

If the committee, which oversees the implementation of the ECHR's decisions, asks the court to declare Turkey in violation, the council could then vote to suspend Turkey’s membership or voting rights within the body. After Azerbaijan, Turkey would become the second nation to ever face suspension from the council.

“I do not want that innocent people are imprisoned with feelings of grudge and vengeance,” Kilicdaroglu said Oct. 12. “Why are Osman Kavala, Selahattin Demirtas, military students, lawyers seeking justice behind bars?”

The ECHR also ruled Demirtas must be released in December 2020, stating he was detained without sufficient evidence to support the terror-related charges lodged against him.

“In Osman Kavala’s case, pre-trial detention has been used as a punishment, as a first resort and in the absence of any concrete evidence of criminal acts,” Buyum told Al-Monitor.

Kavala’s next hearing is scheduled for Nov. 26.