Renowned philanthropist and peace advocate Osman Kavala's detention is extended after his case was adjourned. 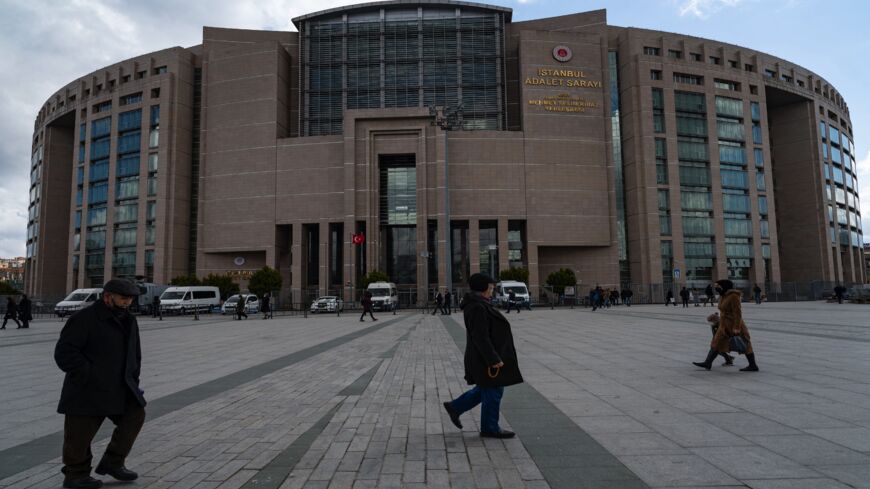 People walk past the Caglayan Justice Palace courthouse in Istanbul on March 21, 2022. Turkey's leading activist, Osman Kavala, who at the weekend marked his 1,600th day in prison without conviction, will appear in court on March 21, 2022, in a case that has strained Ankara's ties with the West. - YASIN AKGUL/AFP via Getty Images

A Turkish court ruled on Monday that Osman Kavala, a renowned philanthropist and peace advocate, remain in prison in a long-running trial seen as a bellwether for Turkey’s crippled democracy. The decision has raised worries that Turkey sees its geostrategic influence, highlighted by the conflict in Ukraine, as a free pass for further rights abuses.

A verdict was widely expected in today's hearing but was put off until April 22. This was to allow the defense to respond to the prosecutor’s final opinion on behalf of Kavala and others accused of espionage and seeking to overthrow the government of President Recep Tayyip Erdogan.

Kavala, 64, who has poured millions from his personal fortune into arts, culture and reconciliation between Armenians and Turks and between Turks and Kurds, has been held since Oct. 18, 2017, in a case marked by wild accusations, flimsy evidence and legal acrobatics that lawyers say are designed to keep him behind bars.

Prosecutor Edip Sahiner is seeking aggravated life sentences for Kavala and fellow civil society activist Mucella Yapci, and up to 20 years for six other defendants. He requested that the files of the remaining nine who are being tried in absentia be dealt with separately. They include US academic Henri Barkey. All of the defendants deny the charges.

The prosecution is widely assumed to be taking its cues from Erdogan. The Turkish strongman has publicly accused Kavala of “financing terrorists” in the 2013 Gezi demonstrations against his government and of receiving support from “the famous Hungarian Jew,” an allusion to Hungarian-born American billionaire George Soros. Though he has yet to show evidence to prove it, Erdogan is said to be convinced that Kavala was involved in the 2016 attempt to violently oust his government.

“This case has been riddled from start to finish with unlawfulness and arbitrariness. This is a politically motivated case,” said Milena Buyum, campaigner for Turkey at Amnesty International who was present at today’s hearing. “Its purpose appears to be to keep Kavala behind bars, come what may,” she told Al-Monitor.

In December 2019, the European Court of Human Rights (ECHR) ordered Kavala’s immediate release, saying that his rights had been violated by the Turkish state. In 2021, the ECHR repeated the demand for prominent Kurdish politician Selahattin Demirtas, who was imprisoned in 2016 on thinly evidenced terrorism charges. Its decisions are legally binding for Turkey but in both instances continue to be ignored.

In February, the Council of Europe referred Kavala’s case to the ECHR for its legal opinion on whether Turkey had failed to meet its obligations to comply with the judgement, as it is widely expected to. The Strasbourg-based body has until April 19 to deliver its verdict. The outcome could see Turkey ending up alongside Russia, stripped of its membership, should Kavala not be freed.

In October, Erdogan ordered the ambassadors of 10 countries, including the United States, France and Germany, to be declared persona non grata after they publicly called for Kavala's release. Though he rescinded the order, “There’s nothing to indicate that anything’s changed,” Buyum noted.

Sure enough, his interior minister, Suleyman Soylu, told the pro-government daily Sabah last week, “Those who seek Kavala’s release by manipulating the laws are also the murderers of children in Ukraine and Syria."

“Soros is responsible for all children who die in war,” Soylu added.

The conflict in Ukraine could yet change the calculus in a positive way, or ought to, argues Emma Sinclair-Webb, Turkey director for Human Rights Watch. Erdogan boasts that Turkey is a “key country” that can talk to Russia and Ukraine alike. “I want to believe that in the context of Turkey presenting itself as a mediator between Russia and Ukraine, Turkey would use this opportunity to clean up its act at the Council of Europe and to focus on ‘how we get back things we lost in terms of our international reputation’ and to demonstrate 'how different we are from Russia’ instead of engaging in bad-faith tricks,” Sinclair-Webb told Al-Monitor.

“The prosecutor’s call for life imprisonment for Kavala and Yapici takes us exactly in the opposite direction,” Sinclair-Webb added.

Indeed, there is growing worry among human rights defenders that Western governments will display lenience with Turkey as they compete with Moscow for Ankara’s affections in the midst of the Ukraine crisis. “The Council of Europe is a political body and makes political decisions. It may not want to alienate Turkey further, especially since expelling Russia,” said Ramazan Demir, a lawyer for Demirtas. “Turkey is very good at lobbying. It’s very influential,” Demir told Al-Monitor.

The EU began taking a softer approach after its 2016 accord with Ankara under which Turkey serves as a holding pen for millions of Syrian refugees in exchange for billions of euros. “The deal has been a bane for human rights in Turkey,” Buyum said. The EU’s "hypocrisy” has been fully exposed by the Ukraine crisis. “It's proved that Europe is equipped to host millions of refugees provided they are of the right complexion,” Buyum said.

Marc Pierini, a former EU ambassador to Ankara and a fellow at Carnegie Europe, contends that behind closed doors, the EU continues to signal its disapproval over Ankara’s thuggish behavior. Pierini reckons it is unlikely to change, and least of all before parliamentary and presidential elections that are due to be held in 2023 as Erdogan falls back on his anti-Western rhetoric to shore up his flagging poll numbers.

“The EU/Western position on this topic may currently look feeble because of uncertainty [over the war in Ukraine] and the need to keep Turkey as much on NATO’s side as possible. However, I think the EU’s rule-of-law anchor is here to stay,” Pierini said. It’s “hard to see how the EU would want to simultaneously apply tough standards to Russia and lenient ones to Turkey,” he added.

On April 15, Ankara has the opportunity to shame cynics when Kavala’s detention status comes up for monthly review and once again on April 22 when a final verdict in the case is handed down. The outcome will clarify which direction Turkey intends to take.