Despite the European Court of Human Rights' order for his release, Turkish philanthropist Osman Kavala remains imprisoned in Turkey on what supporters call politically motivated charges. 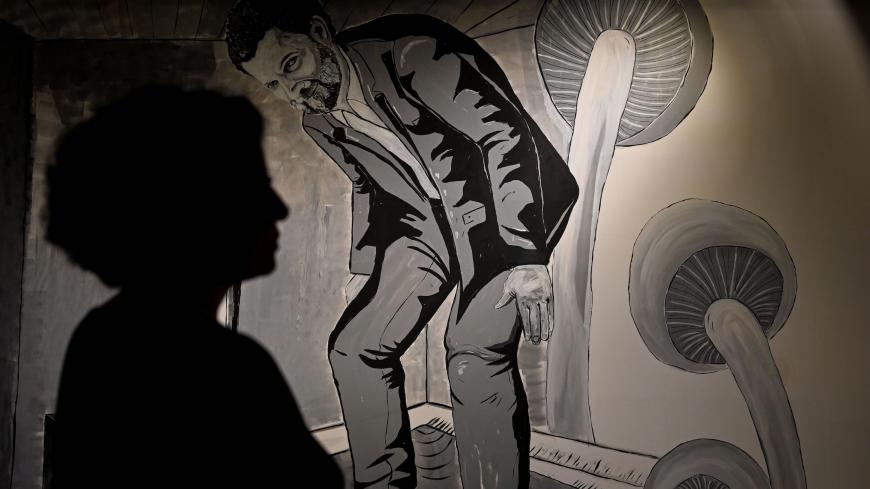 Director general of the Anatolian Culture Asena Gunal stands in front of Osman Kavala's portrait during an interview at Anatolian Cultur Center on Feb. 26, 2020, in Istanbul. - OZAN KOSE/AFP via Getty Images

ISTANBUL — One thousand days after his arrest in November 2017, Turkish philanthropist Osman Kavala remains behind bars on what human rights advocates protest are baseless and politically motivated charges.

Marking the milestone Monday, Amnesty International and several human rights associations posted with the hashtag #CrimeNotFound, calling for his immediate release over a lack of evidence to justify his ongoing imprisonment.

"We've had 1,000 days stolen from our life,” Kavala’s wife Ayse Bugra said during an online press event Saturday. “My husband's mother is over the age of 90 and she doesn't know whether she will ever see her son again.”

Kavala, the 62-year-old director of the Turkey’s Anadolu Kultur civil society organization, was charged with plotting and supporting the anti-government Gezi protests in 2013. On Dec. 10, 2019, his prolonged pretrial dentation was determined to be a violation of human rights laws by the European Court of Human Rights (ECHR), which called for his immediate release.

Kavala remained imprisoned until a Feb. 18 trial, when he was acquitted with eight other defendants over the Gezi protest charges, but he was quickly rearrested in connection to a new espionage case stemming from his alleged involvement in Turkey’s 2016 coup attempt.

“After the new charges invented at the last minute to continue my detention, we have reached such a point that it will no longer be possible to find a legal cover for the ongoing lawlessness,” Kavala said in a statement Monday.

Human rights advocates say the latest charges lodged against Kavala lack substantive evidence and the case is emblematic of politicized court proceedings against civil society leaders and opposition figures in Turkey, such as the former co-chairs of the People's Democratic Party, Selahattin Demirtas and Figen Yuksekdag, who have been imprisoned since November 2016.

“He’s truly become a symbol for all those who are suffering the same treatment in Turkey, who are being arbitrarily detained, who are being subjected to unfair prosecution,” Milena Buyum, Turkey campaigner for Amnesty International, told Al-Monitor.

Buyum said the new espionage charges were brought to “circumvent” the ECHR ruling for his release, which came into force May 11 after the court rejected an appeal by Turkish officials.

“To have committed an act of espionage you need to be in possession of state secrets,” Buym told Al-Monitor. “Osman Kavala is not a state employee. … What kind of espionage could he have engaged in? This is just so absurd.”

Though the ECHR and members of international community have continued calls for Turkey to implement the ECHR ruling for his release, prosecutors maintain the decision does not apply to the espionage case brought after the decision was finalized.

The commissioner for human rights for the Council of Europe (CoE) refuted such claims in a report issued earlier this month, concluding the new criminal proceedings against Kavala represented “a seamless extension and continuation” of previous abuses by the Turkish legal system.

In September, the council’s committee of ministers is expected to review Kavala’s ongoing detention and reiterate appeals for Turkey to implement the Dec. 10 ECHR ruling as a signatory to the European Convention of Human Rights.

Kavala, a prominent funder of arts and culture institutions, has also received substantial support from creative communities, with the United Kingdom-based Opera Circus releasing an opera-themed film in June titled “Osman Bey and the Snails.”

Yet the international support and efforts to raise awareness of Kavala’s ongoing detention have yet to produce results, said Merve Tahiroglu, Turkey program coordinator at Washington-based Project on Middle East Democracy.

“These campaigns have failed to move the Turkish judiciary or to put any real pressure on the government,” Tahiroglu told Al-Monitor. “The CoE statements similarly fall on deaf ears. Turkey’s blatant defiance of the ECHR ruling clearly shows that [President Recep Tayyip] Erdogan’s regime has no respect for international law or institutions.”

She added, “Turkey’s friends in Europe and the United States must recognize, and many already do, what Kavala’s detention shows about the rule of law in Turkey, and what it spells for Turkey’s pro-democratic civil society under Erdogan.”

Erdogan has likened Kavala to George Soros, a Hungarian-American philanthropist, indirectly accusing him of financing projects to undermine the Turkish government.

Responding to the milestone of Kavala’s 1,000th day in prison, German Human Rights Commissioner Barbel Kofler said in a statement Sunday he could not “comprehend” why the philanthropist has not been released.

“The fact that he remains in custody, though cleared in the Gezi Park trial and despite the decision by the European Court of Human Rights, raises serious doubts about the validity of rule‑of‑law principles in Turkey,” Kofler said. “In its judgment, the court in Strasbourg stated that the detention was designed to keep Osman Kavala quiet.”

He added, “I look with increasing concern at the status of the rule of law and fundamental freedoms in Turkey. Osman Kavala and Turkey’s civil society can count on my continued solidarity.”