Taraf, a plucky liberal newspaper operating on a shoestring budget, was the poster child for the AKP's efforts to defang the Turkish army. Its fortunes mirror the feud between the AKP and Fethullah Gulen. 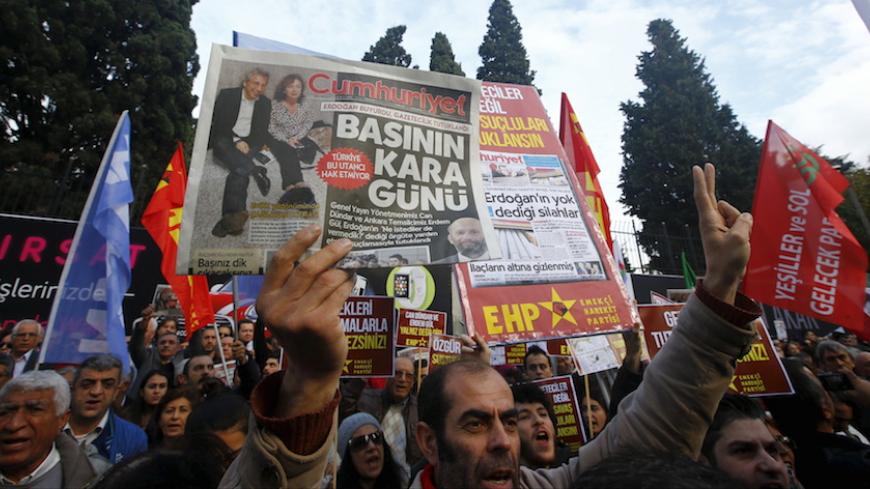 A demonstrator holds a newspaper that reads "Black day of the press" during a protest outside the Cumhuriyet newspaper in Istanbul, Nov. 27, 2015. - REUTERS/Osman Orsal

On April 27, 2007, the Turkish General Staff posted a statement on its website cataloguing the supposed anti-secular activities occurring under the ruling Justice and Development Party's (AKP) watch. The underlying message of the "e-memorandum" was unmistakable: If Abdullah Gul, then foreign minister, whose wife wore the Islamic headscarf, persisted in his campaign to become Turkey's president, the army would intervene.

But Gul was elected, and the AKP grew stronger; the army was weakened, but not beaten. It was in this febrile atmosphere that a new newspaper, Taraf, was born.

With "to think is to take a stand" as its motto, Taraf's mission was to open Turkey's biggest taboos to debate. From the Armenian genocide to the brutal repression of the Kurds, no subject was off-limits. But Taraf's overriding goal was to help ensure through its coverage that the army would never be able to seize power again.

Nearly a decade later, on July 15, a large group of renegade officers backed by tanks and F-16 fighter jets sought to bloodily overthrow the AKP, murdering hundreds of civilians, bombing the parliament and seeking to assassinate the country's president, Recep Tayyip Erdogan. In the ensuing government clampdown, Taraf was banned together with 44 other newspapers, 29 publishing houses, 23 radio stations, 16 TV channels, 15 magazines and three wire services, all for their alleged links to Fethullah Gulen, the Sunni Muslim cleric who is accused of masterminding the attempted takeover.

Taraf's improbable journey from coup fighter to alleged coup plotter offers bitter lessons about how the power struggle between Erdogan and Gulen is tearing the country apart and how journalists like me have been caught in the middle — or behind bars. As usual in Turkey, the truth is the biggest casualty of all.

In the early days of AKP rule it seemed like the endless cycle of repression and misrule that defined much of modern Turkey's past was finally to be reversed. When Yasemin Congar, a widely respected Washington-based Turkish journalist, invited me to write for Taraf, I instantly agreed. Like many liberals, I saw the army as the biggest obstacle to Turkey's democratization and the AKP as its greatest hope.

Running in tandem with the Ergenekon case that was launched against hundreds of generals and their alleged accomplices on coup plotting charges, Taraf's steady diet of determinedly irreverent articles exposing the army's misdeeds was drawing the secularist establishment's ire. AKP officials quietly cheered us on. A minister who retains his post in the current Cabinet confided that he was trying to find funds to keep the cash-strapped paper going.

And it did, breaking the biggest stories on a near-weekly basis. Take the case of the unit commander in the eastern province of Elazig who punished a private for falling asleep on duty by pulling the pin of a hand grenade and forcing him to hold the live munition in his palm. The private pleaded for nearly an hour for help. His hand weakened and the grenade exploded, killing the private and three other soldiers. The affair would have been covered up as yet another "accident" had it not been for Taraf. Mehmet Baransu, the paper's star reporter, dug up the facts.

But it was the cache of documents handed over in a bulging suitcase to Baransu that caused the greatest stir. These purportedly contained evidence of what came to be known as the "Sledgehammer" case, a cocktail of false flag operations ranging from bombing mosques to murdering Christians that were meant to serve as justification for another military takeover.

Meanwhile, hundreds more got swept up in the prosecutors' net, including two pro-secular journalists and a prominent police chief. The trio shared one thing in common: all had written books about how Gulen's disciples had penetrated the state.

Charges that most of the evidence was either embellished or fabricated grew louder by the day. Dani Rodrik, a globally respected economist whose father-in-law, Cetin Dogan, was among the generals arrested over Sledgehammer, set about cataloging the inconsistencies with his wife and fellow academic, Pinar Dogan. Some were pretty glaring. Taraf looked the other way. By then I had been lured away to another newly launched paper, Haberturk. And at first, I, too, mostly looked the other way.

Still, the question of why all these officers were being punished for crimes they were accused of planning rather than ones they had actually committed, namely their gross human rights violations in the heavily Kurdish southeast, was starting to weigh. Why were my journalist colleagues in prison for no other crime than criticizing the Gulenists? And why were the Gulenists vilifying me in their columns for asking?

Yet, few of us bothered to ask how many Gulenists had infiltrated the army. For years, the generals had discharged hundreds of their own for being Gulenists. But the expulsions all but stopped when the AKP came to power in 2002, cementing an informal coalition with the Gulenists and ushering hundreds if not thousands of them into the state apparatus.

The unraveling of this alliance has been well documented. Their fight was not over ideas; it was mainly over power and spoils. The effects were immediately felt at Taraf when Ahmet Altan, its iconic editor-in-chief, and by then Erdogan's fiercest critic, was pushed out in December 2012.

A new, pro-AKP editor was installed. But he was forced to resign three months later when the Gulenists mounted a countercoup. Many columnists walked out in protest and were rewarded with lavishly paid columns in the pro-Erdogan media. Around the same time, I was sacked from Haberturk under government pressure and went back to a much-diminished Taraf before moving on to Diken, an independent online news portal.

As tensions with the Gulenists escalated, the AKP grew more authoritarian. The government's new narrative was that it was duped into believing the coup-plotting allegations against the army. All the charges in the Ergenekon and Sledgehammer cases have been dismissed and the defendants freed.

Baransu has been rotting in pretrial detention since March 2015 in the same Istanbul prison where the Ergenekon suspects were held. The charges against him include obtaining classified documents related to the Sledgehammer case and membership of the so-called Fethullah Gulen Terror Organization.

Altan and Congar are facing up to 52 years in prison together with a fellow editor on similar charges, though neither has been detained. Dozens of other journalists affiliated with Gulen's now-defunct media empire are on the government's wanted list for their alleged role in the botched coup. Among those imprisoned are Nazli Ilicak, the feisty 72-year-old doyenne of the Turkish media who was a cheerleader for Erdogan before unequivocally embracing Gulen, and Lale Sariibrahimoglu, one of Turkey's best-informed journalists on military affairs.

Were all of those implicated in the Ergenekon and Sledgehammer trials innocent victims of the Gulen network? Were the Gulenists the driving force behind the attempted coup? Were some at Taraf either complicit or unwittingly used to advance their agenda?

The answer to the latter question is "probably." But here is what we can say with certainty: The army has mounted three direct coups since 1960, when it hanged an elected prime minister, Adnan Menderes. In 1980, it detained half a million people and executed 50 of them. Any journalist who covered Turkey when the AKP first rose to power knew that the army was desperate to get rid of Erdogan. The notion that they were plotting another coup when the Ergenekon trial was launched was not far-fetched. But the Gulenists wrecked any chance of getting at the truth with their ruthless pursuit for absolute control.

There is little doubt that many Gulenists infiltrated the army and that they participated in the coup. It is equally likely that some militant Kemalists who have long itched to unseat Erdogan did so as well; the scale of the coup that covered the entire country, and involved so many different branches of the military, makes it improbable that the Gulenists acted on their own. And while much is being made of the "Islamic fundamentalist" threat the Gulenists pose, the truth is that when it comes to the Kurds, Gulen and the Kemalists are on the same page. They were viscerally opposed to Erdogan's Kurdish peace process and did everything to sabotage it.

Instead of focusing on the gargantuan intelligence failure that allowed the coup attempt to materialize, the country is consumed with the usual conspiracy theories about American involvement and the Western media's distortion of the truth. The hard questions are brushed aside. History is being rewritten to pin all that ails Turkey on Gulen and the mainstream news outlets are zealously propagating it. To challenge this version is to be labeled a coup supporter. Yet if the Taraf that I first knew, the Taraf that spoke truth to power, were still alive, that is what it would have done. Not only has Taraf been shut down, its entire online archive has been deleted. Taraf is dead.