The detention of about one-third of the upper ranks of Turkey's military following the July 15 coup attempt shows the army had not been a real army for a long time, and it could take decades to rebuild its status. 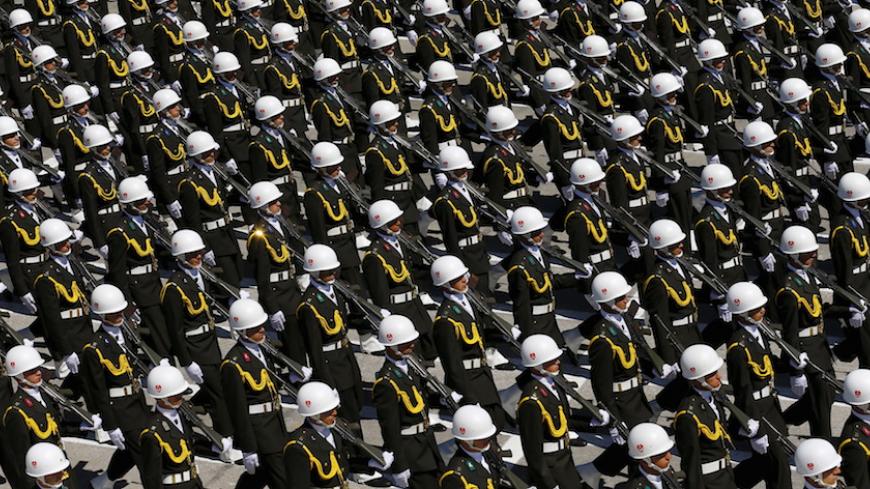 The air force and gendarmerie forces played key roles in the uprising. The coup attempt launched by generals calling themselves "Peace in the Country Council" was planned at the Gendarmerie General Command Headquarters in Ankara. Akinci air base, some 20 kilometers (12 miles) from the city, served as the coup's operations center. In addition to several armored units in Ankara and Istanbul, assault and general-purpose helicopters of the army aviation units supported the coup attempt.

Rumors suggest the most hawkish elements of the army fighting the Kurdistan Workers Party (PKK) in the southeast were on hand at the coup operations center.

A striking development was the arrest of four-star Gen. Adem Huduti, the commander of the Malatya-based second army, which conducts operations in Diyarbakir and Sirnak, the main fronts of the battle that devastated those towns with tank and artillery fire. Leaders of commando brigades at Sirnak and Hakkari were detained on charges of joining the coup attempt.

An overview of the attempt shows that this was a widespread uprising with nationwide tentacles. Immediately after the collapse of the coup attempt on the morning of July 16, military units loyal to the civilian regime and police were already rounding up coup plotters in more than 30 provinces.

Although it might be impossible so soon after July 15 to accurately calculate the extent of coup supporters in the TSK, it would not be an exaggeration to estimate that between one-third and one-half of forces on the ground had joined the uprising at various levels. The Turkish navy was the only branch that the Peace in the Country group could not sign up for the uprising in any significant manner.

Government spokesmen have been insisting that the coup plotters constituted "only a small minority" of the TSK. But even a cursory review of the list of commanders in custody shows that this wasn’t a tiny minority at all.

Those spokesmen, however, are justified in saying that those known to be affiliated with the Gulen movement, or the Congregation, have been organizing inside the army for decades. Though the movement's leader Fethullah Gulen denies any knowledge of the coup attempt, Gulenist officers were the brains behind the coup and backbone of the operation.

This socio-political Islamic movement that emerged in the early 1970s and takes its name from Gulen, a Sunni Turkish cleric, sought to infiltrate the agencies and institutions of the Turkish state. Although Gulen has been living in the United States since 1999, he and Erdogan were allies until 2013. The pair formed an alliance against the secular military and civilian bureaucracy. That allowed for easy penetration by Gulenists. It was well-known that Gulenists were particularly active in the national police agency and the judiciary. Although there was much speculation, the level of the Gulenists' TSK penetration wasn’t really known.

The Erdogan-Gulen alliance purged Kemalist (followers of Mustafa Kemal Ataturk, the founder of the Turkish Republic) and secular generals they saw as their common enemy. The backbone of this political movement was the Sledgehammer and Ergenekon operations and related mass trials. The Erdogan government provided needed political and moral support while the action was carried out by Gulenists, who by then had reached key positions in the judiciary and police.

Their allegation was that Kemalist generals were plotting coups against the Justice and Development Party rule. Their charges were "backed" by fabricated evidence and secret witnesses. A total of 400 serving officers, including 37 generals and admirals, were arrested. At the beginning of 2013, more than 10% of generals and admirals were in prison.

The Ergenekon and Sledgehammer operations eradicated the military tutelage that deemed itself duty-bound to protect the secular characteristics of the rwepublic against "Islamist bigotry" and intervened in national politics when it was deemed necessary.

However, the alliance of convenience between Erdogan and Gulen eventually became an increasingly venomous power struggle. Gulenists wanted a bigger share of state governance, but Erdogan adamantly refused. The strife between them first emerged in 2012. In December 2013, the tension became an outright confrontation when the Gulenist judiciary and police launched corruption operations against Erdogan, his family and close business associates. To terminate the activities of what it called the Fethullah Terror Organization and parallel state structure in the economy, education and media, the government adopted strong measures. Gulenist networks in the judiciary and police were banished. The only ones left untouched were Gulenists in the military.

The earlier purges in the TSK through the Sledgehammer and Ergenekon operations had implications for the July 15 coup attempt: This was a coup of brigadier generals.

Of the 124 generals and admirals detained, 83 are brigadier generals and rear admirals. As far as can be determined, about half of them were promoted to the rank of brigadier and rear admiral in 2013 and later. This indicates that most of the generals who today are accused of coup plotting were promoted to fill the ranks vacated by their colleagues who were purged in the Sledgehammer and Ergenekon cases. It can't be a coincidence that they constitute the majority of the plotters of this failed coup.

We now understand that the Sledgehammer and Ergenekon operations designed by Gulenist prosecutors and police did not seek to eliminate only Kemalist officers. It was designed to ensure that Gulenist officers who joined the military after the mid-1980s would be promoted to higher ranks. These are the officers who are now accused of plotting the failed coup.

The July 15 coup caused major damage to the TSK's upper command that will take many years, if not decades, to repair. An army with a mass of generals who take their orders not from their superiors but from imams in the political and religious Congregation should already be considered crushed. Turkey and the rest of the world learned this bitter truth when those taking their orders from imams tried to stage a coup.

We also realize now that Gulenists who attempted a coup in Turkey could also have manipulated Turkey's international operations or could have joined and influenced their outcome. This TSK, infested with Gulenists, was not the national army of Turkey. The Congregation had become an army within an army. In addition, the TSK is a NATO army. Any crisis, any weakness in its command and performance would also be a NATO crisis.

The TSK is in a historic crisis and decline.

By opening fire and dropping bombs on civilians who took to the streets on Erdogan's call, the institution that until July 15 enjoyed the highest prestige in the eyes of the people is now suffering a phenomenal loss of reputation and legitimacy that could take generations to overcome.

The TSK once added value to Turkey's foreign relations. Not anymore. Its deterrence potential suffered a severe blow, and the loss of confidence by its allies can't be avoided.

The severe weakness and demoralization the army is now experiencing will inevitably damage its effectiveness in the war against the PKK.

Because of the coup attempt, the police and military have been at odds, and the police will no doubt be on alert to prevent another coup attempt. The Islamic State, as much as the PKK, benefits from the near paralysis caused by a police force that watches its own army — an army that is coming apart.