Recognizing the urgent need for military changes following the coup attempt, Turkey's leaders have moved up the date of their Supreme Military Council meeting to this week. 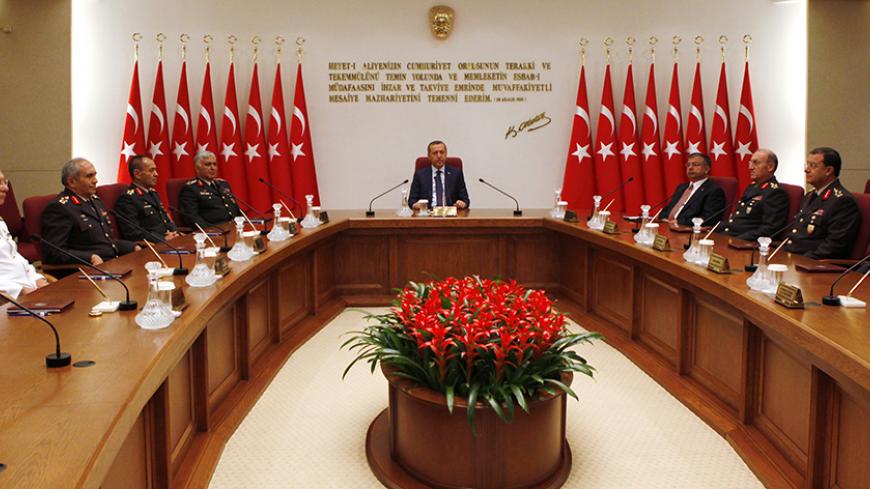 The Turkish government has detained so many military personnel since the July 15 coup attempt that it has moved up a Supreme Military Council (SMC) meeting to determine what to do next and what reforms are needed in the Turkish military (TSK).

The massive number of detained military personnel continues to rise. According to Prime Minister Binali Yildirim, as of the evening of July 23, 8,838 military personnel had been detained. Of those, 163 are generals and admirals — about 40% of the TSK total in those ranks. Another 2,339 are officers, 6% of the TSK total. Of those who were brought before a judge, 123 generals and admirals and 1,009 officers were arrested and sent to prison.

The incredibly high number of generals removed from duty makes the upcoming council meeting — where promotions, appointments and retirements of generals are decided — extremely important this year. As I pointed out in a July 19 column, one of the key reasons for the coup attempt was the fear of the coup plotters that the council was planning to discharge most of them from the TSK. President Recep Tayyip Erdogan blames the so-called Fethullah Terror Organization (FETO), which he said had penetrated the TSK and hastily decided to stage a coup when it heard of the coming purge.

This week, meeting planners decided to move the SMC meeting up to July 28 instead of the originally scheduled Aug. 1-4, and to change the venue. Traditionally the SMC meets at the headquarters of the chief of general staff; this year it will be meeting at Cankaya Palace. Many see this location change as evidence of Erdogan’s continuing lack of confidence in the TSK. Also, files for personnel actions, which used to be prepared by the chief of military staff's personnel department, this year are being prepared by the ground forces' personnel department and the national intelligence service, MIT, as the key officers responsible for this work — primarily the head of personnel of the chief of staff headquarters — are in custody.

The most important SMC agenda item this year will be to decide what follow-up actions to take because of the coup attempt and what reforms to make in the TSK. The first question the SMC will tackle will be to determine who was involved in the coup attempt. Depending on their findings, more officers may be purged.

This is where the confusion begins. The first thing to note is that there is no common, basic ideology uniting the coup participants. There are diverse motivations: Various small cliques have personal interests and divergent aims for the TSK. So far the main groups that have been discerned are:

The engine pulling all these motivations is the pro-FETO group. Continuing the train analogy, it is possible to classify the TSK as:

Two of the groups probably make up 70% of the total number of TSK officer corps: those with the ranks of major and above who were on the coup train that night, but who jumped off at the last minute when they heard the train was leaving, and generals who got on board at the last moment. Now the Turkish judiciary is trying to classify those TSK personnel involved, and civilian rule will decide what to do with them. Judging from Erdogan's statements, it is not hard to guess that the government will be pitiless when deciding on purges.

So what are the questions this critical SMC meeting will clarify?

In sum, the critical SMC meeting at which Erdogan will determine the next command echelons of the TSK will offer concrete clues as to the scope and pace of TSK purges and the TSK’s institutional transformation. Government leaders must watch out for the danger of turmoil in the TSK if the purges are too massive and made too quickly. Although such disturbances many not devolve into a major uprising like the one of July 15, they could instigate skirmishes here and there. This could negatively affect the crime-deterrence effect of the TSK, which is already battling the PKK and Islamic State and is conducting major border security operations. Erdogan reportedly wants to ensure there will be no threat of another TSK coup by attaching it to the presidency instead of to the prime minister as it is now, by changing the military education and training systems and by ensuring structural reforms in promotions and appointments.

Some would say the TSK today is like a bird in Erdogan’s hands: Hold it too tight and it will die of suffocation, but hold it too loose and it will fly away.