Planners of the coup attempt in Turkey last week were caught off guard and had to accelerate their operation at the last minute when their plot was discovered. 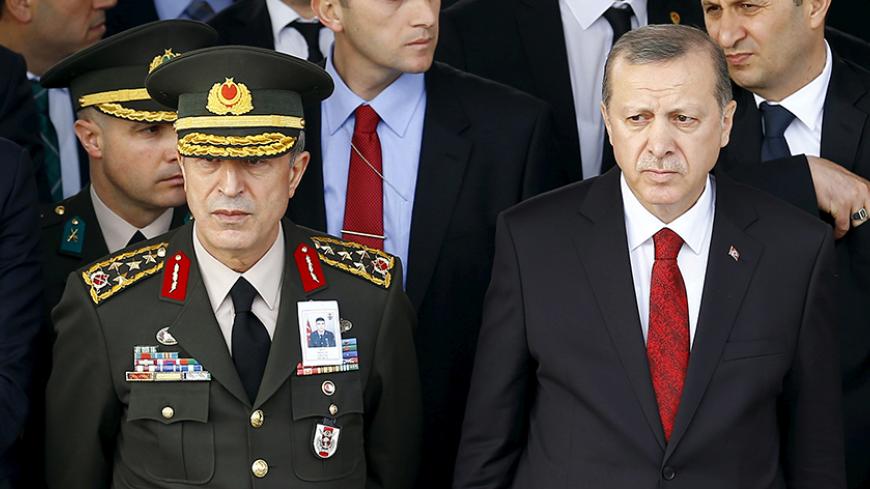 Perhaps the hasty coup attempt in Turkey last week was doomed to fail. The leaders setting up a WhatsApp group to coordinate a major takeover was a sure indication of their unpreparedness.

The attempt began the night of July 15 and ended soon after. In the current tally, as of the morning of July 19, plotters had killed 60 police, three soldiers and 145 civilians. Some 100 also died among the coup forces. More than 6,000 soldiers were detained, including about 4,000 conscripts and about 2,000 ranked personnel, 15% with the rank of major or above. Among the detainees were 118 generals — one-third of the all generals in the Turkish Armed Forces (TSK).

Of the detainees, about 2,400 soldiers were taken into custody in Ankara and 1,500 in Istanbul. As of July 19, about 60 of the detained generals had been questioned and arrested, and three were released. Mass detentions were not limited to the TSK: Some 8,000 police were suspended from their posts, and 4,000 more were detained from the Ministry of Interior, which includes the Gendarmerie Command and other government offices.

The basic reason the coup failed was its premature birth. How? First, the coup was planned for a later date but was moved up. Then the rescheduled coup, which was to have started at 3 a.m. July 16, was moved up yet again by five hours, to around 10 p.m. July 15, after the coup attempt was discovered.

Well-placed sources in Ankara who spoke to Al-Monitor on condition of anonymity said coup forces were an assortment of members of the so-called Fethullah Gulen Terror Organization (FETO) — secularists who oppose the ruling Justice and Development Party (AKP) government and President Recep Tayyip Erdogan; pragmatists who joined the plotters for career advancement and personal interests; soldiers who had to join under pressure or blackmail; and lower-ranking soldiers who couldn’t defy orders because of the TSK's absolute-obedience culture. The plan failed because they took action before the planned time. Why did they act so hastily?

The primary reason was because they knew the forthcoming Supreme Military Council, which decides on promotions and appointments of TSK generals and admirals, was set to convene the first week of August. Last year, in an Aug. 3 article for Al-Monitor titled "Shakeup expected for Turkish military leadership," I had written that one of the most important missions of newly appointed Chief of General Staff Gen. Hulusi Akar would be to combat the Gulenists in the TSK, and that there were several lists circulating with names of such officers. The AKP government was favoring a purge of these officers, while the military command was advocating a phased, deliberate process based on solid evidence.

FETO partisans in the TSK had gotten away relatively unscathed from the 2015 council meeting, but there were sure signs that this year would be different.

Developments prior to the Supreme Military Council meeting this year seem to indicate that the divergence of views between the government and the military had been somewhat reconciled. Last week, during the military espionage hearings in Izmir, six serving officers were detained, including an admiral and two generals. Four of the detained officers were consequently arrested. In an earlier "military espionage case," also in Izmir, 359 defendants, including serving officers, were all acquitted of charges of keeping secret documents.

With the indictments in last week's Izmir espionage case, the Turkish judiciary was gearing up to target about 1,000 Gulenists in the TSK prior to the supreme council meeting. With so many detentions just before the meeting, the government was intending to compel the TSK command to carry out mass purges.

When the coup planners learned of that intention, they moved up the date to precede the council meeting. This turned out to be a suicidal move.

Why the night of July 15? Former four-star air force Commander Gen. Akin Ozturk, now accused of leading the coup, knew that the current head of the air force, Gen. Abidin Unal, and other key air force generals would all be at a wedding, which would give the air force freedom to act against the government.

Reports said the coup leaders had informed all participating units that they would launch operations at 5 a.m., and that as of 6 a.m. there would be a nationwide curfew.

Al-Monitor’s sources said coup leaders had planned to move at 3 a.m. to take over by 5 a.m., when people would be asleep and streets would be empty. But this didn’t work. Around 4 p.m. July 15, 11 hours before the coup was to start, the national intelligence service MIT learned from radio and telephone intercepts of TSK personnel known to be Gulenists that some units were gearing up. MIT informed the chief of general staff at 5 p.m. At a meeting at the chief of general staff headquarters, officials decided to close Turkish air space to all flights as of 6 p.m. and bar military units from leaving their barracks. While that order was being written, Land Forces Commander Gen. Salih Zeki Colak was called to the general staff headquarters.

By 7 p.m., coup plotters realized that their plan was exposed and were able to take Akar hostage. When Akar refused for two hours to sign an order commanding all units to join the coup action and to go on TV to tell the nation that the army with its entire chain of command had taken over, they were further delayed. At the end, the plotters couldn’t get Akar's signature, so they sent out an order signed by a brigadier general and launched their coup around 9:30 p.m. — that is, 5½ hours before the planned time. The first indication of the rash, reckless actions by the Istanbul wing of the coup was sending out small units commanded by junior ranks to streets on the pretense of exercising or fighting terror.

These officers who were trying to coordinate their action through WhatsApp made a monumental mistake of closing the two bridges over the Bosporus River when everybody was out enjoying Friday night and traffic was heavy. That is when all of Turkey realized a coup attempt was in the offing.

Meanwhile, the commander of the first army in Istanbul, Gen. Umit Dundar, and the commander of special forces, Maj. Gen. Zekai Aksakalli — who could not be persuaded to join the coup — publicly declared the coup was not a decision of the TSK chain of command, was illegal and had nothing to do with the army. Their statements were severe blows to the plotters. At 10 p.m., the coup leaders sent 12 F-16s to make low-altitude flights over Ankara and Istanbul, trying to intimidate people to remain at home. The planes' insane bombing of symbolic places such as the parliament building and presidential compound came when the plotters realized they had lost control.

Coup plotters had no set plans to control the airwaves. Unexpectedly at 11 p.m., Prime Minister Binali Yildirim appeared on TV to inform the public of the attempt, and then at 11:30 p.m., President Recep Tayyip Erdogan called in, urging the public to take to the streets against the coup. He repeated that call at 3 a.m. at Istanbul Ataturk Airport, bringing coup units face to face with an angry public marching into sensitive areas.

By then, the coup had disintegrated and its planners were looking for ways to save themselves.

Turkey has successfully driven through a critical curve. The question is, did democracy win with the collapse of the coup? We'll have to wait a bit to find out.

Meanwhile, in a communique issued July 19, the high command said the TSK had fought bravely against bloody assassins who did not deserve to be in honored uniforms of the country. It said, “TSK, from its youngest conscript to its highest-ranking generals and admirals, are all at their posts, under orders of the state and nation.”

One can only hope that the TSK will somehow regain its prestige, which is essential to the security and well-being of the country.