As the trial of key Turkish military officers allegedly involved in the failed coup enters its second week, the public awaits answers to questions that have lingered since the July 15 event. 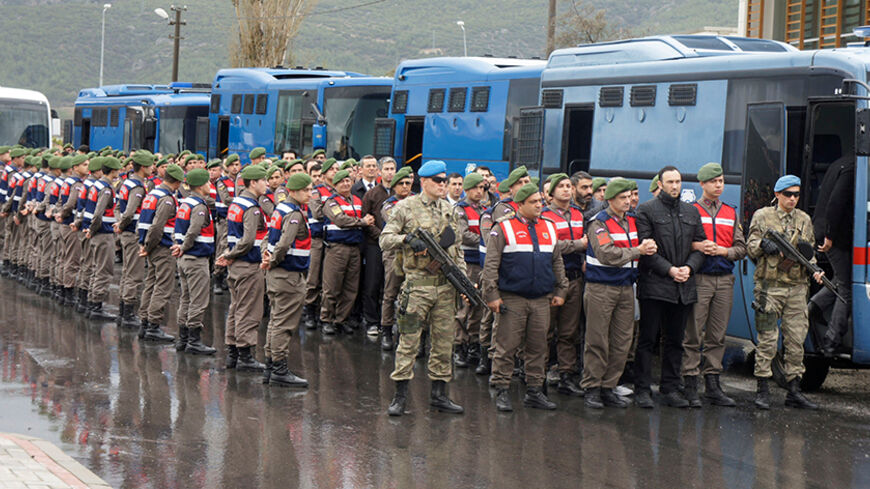 Turkish soldiers accused of attempting to assassinate President Recep Tayyip Erdogan on the night of the failed July 15, 2016, coup are escorted by gendarmes as they arrive at the court in Mugla, Turkey, March 8, 2017. - REUTERS/Kenan Gurbuz

We're still waiting for answers. It's been 10 months, but questions persist about the July 15, 2016, abortive coup in Turkey. Unlike others who saw it as a coup attempt, I classified it as a kamikaze-like military uprising, because the putschists who tried to hijack the state authority that night didn't have a profound ideology binding them together, a strong motivation or clear political goals.

I had previously said that participants in the military uprising, whose driving engine was the Gulen movement, were officers with anti-government sentiments, those with pragmatic goals and career-advancement goals, those who were blackmailed into joining and some who unquestioningly obeyed commands.

Such a military uprising should have been dealt with swiftly, with evidence-driven investigations that focused on what happened that night. Ankara didn't do that. The post-July 15 crisis process was stalled and became an increasingly politicized maze.

The most important question awaiting an answer about the uprising concerns timing. At 2:30 p.m. local time, the National Intelligence Service (MIT) knew major military action would be imminent that night. The Chief of General Staff knew about it at 4:30 p.m. Why, then, didn't they move to counter the uprising? We have been hearing from overt sources that an army helicopter pilot identified as "Maj. O.K." who had been pressured into joining the uprising by Gulenists, changed his mind and warned MIT headquarters at 2:30 p.m. According to witness testimony in the trial that began last week, Maj. O.K. clearly warned MIT officials that there was going to be a massive, and probably bloody, military action.

Other witness accounts said that at 4:30 p.m., MIT chief Hakan Fidan reported the information by phone to Deputy Chief of Staff Gen. Yasar Guler. At 5:30 p.m., the deputy MIT chief went to Chief of General Staff headquarters to personally brief staff on what they had heard. He was followed at 6 p.m. by Fidan, who met with Chief of General Staff Gen. Hulusi Akar, stayed there for more than two hours and left around 8:30 p.m.

Now, like me, everyone in Turkey is asking the same question: Why wasn't anything done in the six hours prior to 8:30 p.m. to cripple the uprising plans Maj. O.K. had clearly warned about at 2:30 p.m.? With such grave intelligence on hand, why weren't the president, prime minister, and ministers of defense and interior briefed on the big picture? Perhaps more amazingly, why were official orders to declare martial law sent out from the Command Operations Center headquarters at 9:30 p.m., thoroughly confusing all military units?

Another vital question, as special forces commander Zekai Aksakalli noted in his deposition, is why didn't Akar see the situation as serious enough to order Turkish air space closed to all flights at around 7 p.m.?

And why didn’t the army's Land Forces Command confine units to barracks, as the Turkish Armed Forces (TSK) routinely do at risky times? If such a routine order had been issued, it would have been evident that all the soldiers who took up arms and left their barracks knew they were disobeying orders and committing a crime. Perhaps Akar and MIT chief Fidan did not expect such an organized, massive military action. It appears they opted to wait a bit, perhaps thinking: "Let them try. We will thus expose the Gulenists in the TSK and eliminate them with concrete evidence."

There is also the likelihood that there were so many Gulenists around Akar that they simply disobeyed his orders. If so, we'll be justified in asking why Akar didn't notice all that time how closely he was encircled.

We have learned some tidbits about these questions from the omnibus court trial of key figures accused of planning the coup attempt, such as former air force commander Akin Ozturk; Mehmet Partigoc, the general in charge of personnel at the Turkish General Staff; Mehmet Disli, general in charge of strategic transformation at the headquarters; and 38 other senior officers identified as members of the so-called “Peace at Home Council,” the junta in charge of the coup attempt. There are 221 main defendants in this trial; 12 of them are on the run. Some of the defendants include a four-star general, three lieutenant generals, four major generals, 16 brigadier generals, three rear admirals, 26 colonels, 27 lieutenant colonels, 37 majors and 21 captains.

Authorities are seeking life sentences for the defendants on charges of attempting to assassinate the president, "martyring" some 250 people, attempting to kill 2,735 people and “restricting the freedoms of high-level commanders and state officials.” Many people, led by President Recep Tayyip Erdogan, find life imprisonment sentences too light and recommend reinstating capital punishment.

A twist in the trial has been shifting more and more attention to Akar. Ozturk, accused of being “the No. 1 of the military wing of the coup,” in his testimony said Akar, who was detained and flown by military helicopter to Akincilar Air Base, was “depressed and nervous [and] was not interned.”

Ozturk was implying that Akar could have easily gotten out of the quarters he was confined to and resumed command of the TSK.

Erhan Caha, in his testimony, said it was impossible to understand why the military personnel unaware of the events were not warned and referred to Aksakalli's deposition: “If the personnel were ordered to remain in their barracks and not to leave their bases, the coup would have been exposed. Couldn’t the people who have served for so long in this profession think of this basic measure? If the personnel had been warned when the attempt was first learned about, we wouldn’t have gone through any of this and people like me and thousands of others would have been spared this disgrace.”

Former military prosecutor Ahmet Zeki Ucok — who for the past few months has been accusing Akar of negligence on July 15 — said, “There is uncertainty here. There is a disconnect between the position voiced by air force Gen. Akin Ozturk and the current command echelon of [Chief of General Staff] Akar and branch commanders. I have been saying that to clear up this mess, the command echelon should have been removed or resigned, because as long as they stay in command, no officer will tell the full truth. Nobody will dare to testify against his superiors.”

Another pertinent criticism of Akar is: Why, when many of the officers who had allegedly participated in the uprising were identified, even in the news, did Akar do nothing about it? Almost all of the senior officers were labeled as Gulenists and accused of being actively involved in the uprising. How can we be expected to believe that the almighty MIT and the high military command did not know about what was reported in the media? Can anybody enlighten us as to why they dealt so feebly with such a vital threat?

There is an increasing public perception that Akar could have confined the units to their bases. Those officers loyal to the state could have remained in command of their units at the bases and prevented them from joining the uprising.

This extremely slow reaction by Akar and Fidan on July 15 between 4:30 and 9:30 p.m. could have three explanations. First, they were professionally incompetent. Second, they underestimated the action capacity of the putschists. And third, they demonstrated gross misjudgment by thinking, "Let them do it. We will thus expose the Gulenists in the TSK and catch them in action."

The answers will become clear someday. So far, we know that the turmoil and high number of casualties could have been prevented. This is going to make the coming days tough for Akar. One wonders why his performance was so weak. Will the next step be for Erdogan to remove Akar and branch commanders from service in August when promotions and new command assignments will be decided?

We can predict that July will be a busy and sensitive month for the military. Erdogan’s decision to retain or retire Akar, no matter which, will have serious ramifications.