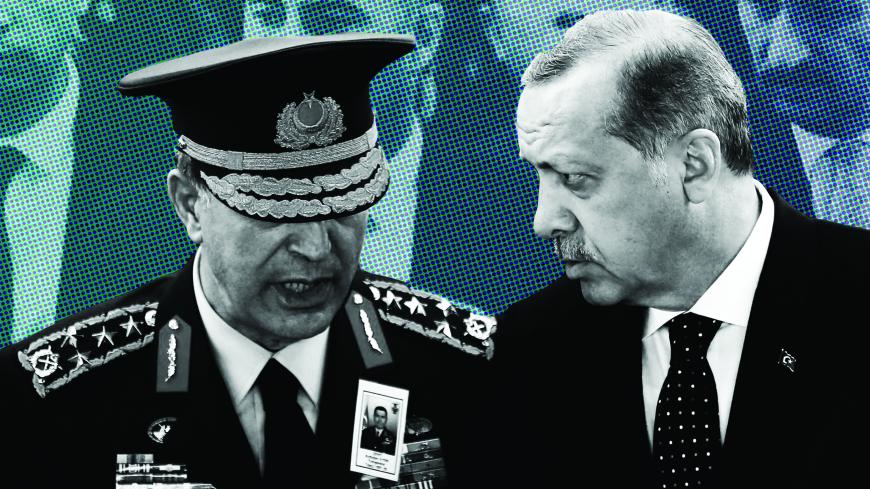 Turkish Chief of Staff Gen. Hulusi Akar (L) and President Recep Tayyip Erdogan chat on June 1, 2017, at Ahmet Hamdi Akseki Mosque in Ankara, Turkey, as they attend the funeral of Maj. Gen. Aydogan Aydin, who was killed in a helicopter crash in Sirnak the day before. - REUTERS/Umit Bektas

The Turkish Defense Ministry stated Aug. 22 that seven generals and admirals of the Turkish military have resigned. The ministry said the resignations were personal initiatives that had nothing to do with a recent round of surprising appointments — and in fact had been received before the Aug. 2 appointments were made — but the popular belief is that these were protests of the growing strength of Gen. Hulusi Akar in the Turkish Armed Forces (TSK).

After Turkey's Supreme Military Council met Aug. 2, I noted that the power and influence of Akar, the TSK chief of general staff, had been reinforced and that relations between civilians and the military from now on could better be grasped not from an institutional perspective, but by understanding the personal trust and harmony between Akar and President Recep Tayyip Erdogan. From now until Akar retires in August 2019, civilian-military relations in Turkey can henceforth be summarized as Erdogan-Akar relations.

Usually, appointments of generals aren't popular discussion items. But when special forces commander Lt. Gen. Zekai Aksakalli — whose popularity skyrocketed because of his stance against the July 15 failed coup last year — was put into a relatively passive post as commander of the 2nd Army Corps in faraway western Turkey, military appointments became a controversial topic. Just a year ago, Aksakalli had been promoted to lieutenant general, and his star truly shined with his command of Operation Euphrates Shield against the Islamic State in Syria.

The most-asked question of the day was why Aksakalli was placed at such a distance when he is most needed. The most imminent threat from Syria in 2018 that might require Turkey’s intervention on the ground is posed by the Kurdish nationalist Democratic Union Party (PYD). If necessary, Turkey will rely on its special forces and battalion-level combat task forces, along with the Free Syrian Army (FSA) units they have been training. In 2014-2015, Aksakalli commanded urban combat operations on the Sur-Nusaybin front and after 2016, he led cross-border operations at al-Bab. He is recognized as the commander who best knows the region and the threats faced.

There are three factors behind Aksakalli’s new appointment. The first is the tense relations between Akar and Aksakalli. There have been comments that Aksakalli, contrary to what is popularly believed, had not opposed the putschists strongly enough, and his differences of opinion with his superiors while he was commanding Operation Euphrates Shield and his criticism of TSK developments after the coup attempt had become public knowledge. Everyone remembers that in March, Aksakalli — in his deposition about the coup attempt — had said, in what was seen as a dig at Akar: “In the TSK, when you hear of a crisis or an emergency situation, the first thing to do is to issue orders confining troops to barracks. If they had applied this basic rule on July 15, the coup attempt would have been unraveled quickly.”

Several retired senior officers have said that this comment by Aksakalli that directly criticized Akar, his superior, was the beginning of the end.

Adding to Aksakalli's woes was a damning statement from Lt. Gen. Metin Temel that created doubts about Aksakalli's supposed "robust stance" against the putschists. Temel, who commands the 2nd Army and is known as the strongest combatant against the attempted coup, said Aksakalli had remained passive during the attempt and went to his own headquarters only the next day, at 11 a.m. July 16.

A number of major problems led to Aksakalli's rifts with Temel in the field and with Akar at the national headquarters: the deaths of 72 soldiers at al-Bab, the loss of scores of tanks and armored vehicles there, Aksakalli's ordering special forces to employ armored units — contrary to TSK’s combat doctrine — and consequently, the loss of coordination among ground units.

Much has been said about how Aksakalli blocked putschists from capturing the special forces headquarters by ordering noncommissioned officer Omer Halisdemir to shoot Brig. Semih Terzi, who was leading that attack. Nevertheless, civilian authorities were not pleased by Aksakalli’s absence from his command post that night.

Military sources in Ankara say that the replacing of Aksakalli — who has spent most of his service with special forces and who had been top commander of special forces for the past four years — with Brig. Ahmet Ercan Corbaci, 11 years his junior, reflects the decision of the high command to rejuvenate the special forces.

There are those who believe Aksakalli did himself in by opting to become a media star and refusing to lower his public profile. Retired special forces Col. Coskun Unal, who is now a Turkey analyst for Sidar Global Advisors, said Aksakalli's appointment to such a passive post is a message to other generals that no officer will be allowed to shine as a public figure, no matter what their record may be. Unal says the recent military promotions and appointments basically scrap TSK's traditional service lengths, promotions and assignments. Unal believes such ambiguity will consolidate Akar’s control of TSK generals, backed by Erdogan's green light.

Unal noted that from now on in the TSK there will be a “Gen. Akar factor” and said: “We are talking of a general who grew up under the influence of Islamic intellectuals; who has been close to religious and conservative political circles since his days as a lieutenant; whose 33-year career included only a very short field experience but long and tiring headquarters postings; who lived through one coup, two allegations of coups and one actual coup attempt; and who now has the full support of the government because of his tough attitude toward the [coup organizers]. He now has the task of cleansing the TSK of hidden extremists before he retires in August 2019.”

One question that is not yet answered is how Aksakalli’s surprising removal from the command of special forces will affect operations in Syria. Unal made a critical point: “No doubt the strong ties and harmony Aksakalli and his team had built with the Free Syrian Army will lose momentum. This may also lead to a degrading of FSA’s importance for Ankara.” We now have to wait and see whether Aksakalli's replacement, Corbaci, will be able to build similarly warm and productive relations with the FSA.

In sum, Aksakalli’s transfer to a placid post far from the action and invisible to public view and the resignations of the seven generals and admirals have fortified the standing of Akar and his close associate, land forces commander Gen. Yasar Guler. These two generals now command a group of obedient young generals who will carry out orders without questioning. Akar’s absolute command and control of the TSK will continue until August 2019, always close to Erdogan.

Whether the tremors in the TSK will continue or calm down depends in part on whether Aksakalli decides to retire, as some predict, or stay in the army. Many of his comrades-in-arms are insisting that he should remain in the army, though his further advancement is highly unlikely.