After massive purge, what’s next for Turkish Armed Forces?

The major structural changes the Turkish Armed Forces is facing following the July 15 coup attempt could have big implications for the army’s strategic culture and Turkey's foreign policy. 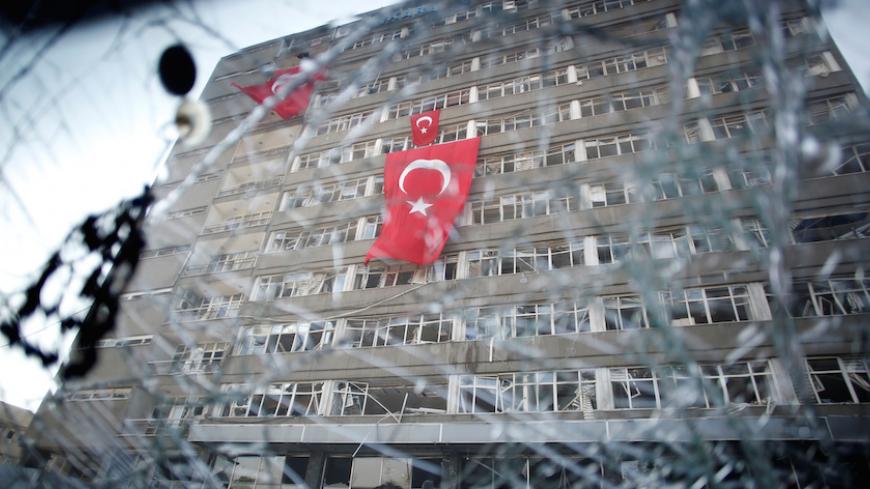 The Ankara police headquarters is seen through a car's broken window caused by fighting during a coup attempt in Ankara, Turkey, July 19, 2016. - REUTERS/Baz Ratner

On July 27, 1,684 ranking officers of the Turkish Armed Forces (TSK) were dismissed for constituting a threat to national security and for their affiliation with the Fethullah Gulen Terror Organization (FETO). This unprecedented purge of officers was carried out using a simple state of emergency decree with the power of law issued by the council of ministers.

The purge ruling, which cannot be appealed, covered 2% of 40,000 officers in the TSK and 1% of approximately 90,000 noncommissioned officers. The ranks most affected were generals and admirals. Of the 325 generals in Turkey's army, air and naval forces, 149 (45.8%) were discharged on July 27, including two four-star generals, seven lieutenant generals, 27 major generals/vice admirals (12 army, 11 air force and four navy) and 126 brigadier generals/rear admirals.

Before the purge was made public, Land Forces Chief of Staff Gen. Ihsan Uyar, the No. 2 name of that major command, and Gen. Kamil Basoglu, commander of Training and Doctrine of the army, submitted their resignations.

Defense Minister Fikri Isik said the dismissals and resignations were not all linked to FETO and included those who did not perform their duties on the night of July 15 or those who did not oppose the coup attempt.

When asked on July 24 whether resignations of Chief of General Staff Gen. Hulusi Akar and head of the National Intelligence Organization (MIT) Hakan Fidan should be expected, President Recep Tayyip Erdogan replied, "You don't switch horses when crossing a river."

That answer meant Erdogan decided to continue with the current command structure without changes at a critical period of major developments in foreign policy and TSK's direct involvement in combat against the Kurdistan Workers Party (PKK), the Islamic State and reinforcing border security. This is why Akar and army, air and navy commanders retained their posts. With the Supreme Military Council's (SMC) decision to promote 99 colonels, the number of generals/admirals in the TSK rose to 227, which is 98 less than the pre-coup attempt level of 325.

The rising stars of the TSK — Gen. Umit Dundar, who was appointed as the deputy chief of General Staff; Gen. Metin Temel appointed as the commander of the second army that is responsible for combating the PKK and ensuring border security; and the head of Special Forces Zekai Aksakalli, who was promoted to lieutenant general — are likely to have strong bearings on the future of the TSK.

So why didn't the SMC change the positions of the chief of General Staff and branch commander as was widely expected in Turkey?

Erdogan has already said the chief of General Staff and MIT should be directly attached to the presidency and that such a move would require structural reforms in Turkey's security. But because of a lack of support from opposition parties for such a radical change, a constitutional amendment will be needed to make those changes.

Erdogan needs the support of Akar to persuade the opposition parties. The new security sector design aspires to generate inter-service rivalry under civilian control by instituting a chief of general staff that will be under the president and whose mission will be one of coordination. Army, air and naval commanders will be under the minister of defense, and gendarmerie, police and coast guard will be under the Ministry of Interior.

The July 27 purge and resignations of two four-star generals indicate a compromise between Erdogan and the current TSK command. For the president to have a decisive say on the fate of the commanders means a significant boost of his control over the TSK. Also, to retain a known entity like Akar for the time being may make it easier to control any grumbling from the TSK ranks.

Ten colonels who were earlier sentenced to prison terms in the Sledgehammer-Ergenekon mass trials were promoted to brigadier general/rear admiral ranks by the SMC. This group, known to be anti-US/NATO and more inclined to nonaligned and Eurasian perspectives, are likely to influence the strategic culture of the TSK. A perusal of the list of generals discharged indicates that many of them were "Atlanticists" who were keen on relations with the United States, Europe and NATO.

Justice and Development Party (AKP) elites and victims of the Sledgehammer-Ergenekon cases, whose influence over the TSK will most likely increase after the SMC meeting, agree on the creation of a national and indigenous army. These two currents are in accord to design a military that is more independent, more anti-US, anti-NATO and anti-West. They believe that the TSK can play a major role to orient Turkish foreign policy to more nonaligned and Eurasian-oriented outlooks. It is therefore possible that the strategic culture of TSK henceforth will be less Atlanticist and more Eurasian.

Because of this split between the two camps, it is likely that we will be witnessing more debates on bans on headscarves and beards, prayers in the TSK, fasting, status of female personnel in the military and allowing religious seminary graduates to become officers and noncommissioned officers in the TSK.

It is almost assured that the institutional identity of the TSK will be less Atlanticist but more of a Eurasian character. But the real tension will be the sustained and hard ideological debates between strong secularists who want TSK's return to its factory settings and those who advocate more Islamization.

(With another decree issued on July 31, a second purge of 1,389 more military personnel were discharged from the TSK.)