After Turkey's massive military purge following the failed coup, the new leadership may push for a differing military strategy. 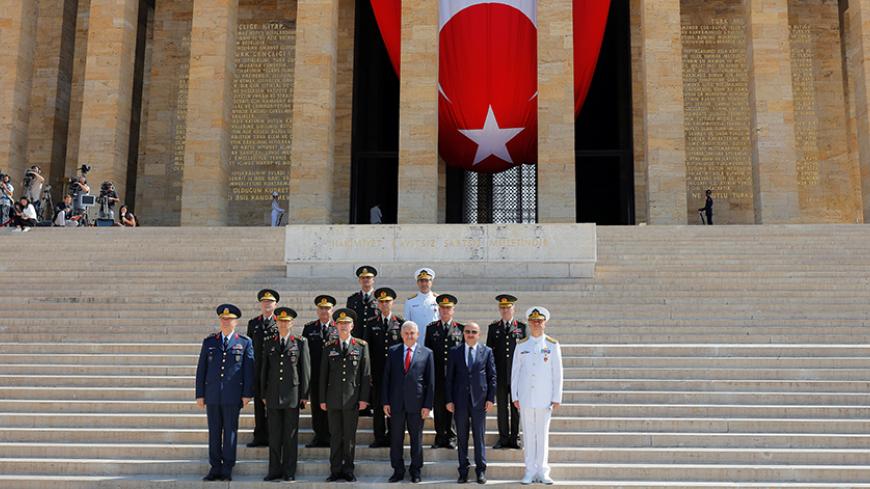 As the number of dismissals from Turkey's military ranks grows after the failed coup last month, we can try to get a clearer picture of who and what will be left when the purge ends.

Turkish Defense Minister Fikri Isik said Aug. 18 that a total of 3,725 ranking officers from the army, navy and air force commands, the gendarmerie and coast guard have been discharged from the Turkish Armed Forces (TSK). The castoffs were strongly suspected of being affiliated with the Gulen movement, or of neglecting their duty at the time of the coup.

Most affected by these summary dismissals were the commanding elites of generals and admirals. Of 325 generals in army, navy and air force, 149 of them (45.8%) were discharged. Among them were two four-star generals, nine lieutenant generals, 30 major generals and vice admirals, and 126 brigadier generals and rear admirals.

A list of expelled generals shows most were officers who gave priority to Atlantic ties and held strong pro-NATO stances. As Turkey has been an important member of the Western security bloc and a strong member of the NATO army, there is no doubt that these dismissals will have major effects on TSK's strategic identity and organizational culture.

Among the discharged TSK generals and colonels were some very important names. There are strong suspicions that two leaders of the coup attempt were Maj. Gen. Mehmet Disli, who was chief of the strategic transformation office at the chief of staff headquarters, and Brig. Gen. Mehmet Partigoc. Also among the expelled were Lt. Gen. Salih Ulusoy, the chief of plans and principles (J5); Maj. Gen. Nevzat Tasdeler, the commander of Staff College; Maj. Gen. Salih Sevil, posted as Turkey’s representative at NATO; and Maj. Gen. Serhat Habiboglu, responsible for force development at the headquarters. All of them held key posts in the TSK transformation process.

Chief of General Staff Gen. Hulusi Akar, since his assignment in August 2015, has been dealing with about 170 TSK transformation projects that seek to ensure an integrated TSK and to reduce its size while increasing its effectiveness. Akar must be enduring some tough days because of these expulsions and the political and public pressures he is under.

The coup attempt has agonizingly politicized the TSK’s institutional transformation. It has become almost impossible to comment on the TSK without taking an ideological position. Treating the subject from an overridingly ideological angle makes it impossible to make an objective, apolitical and worthwhile technical analysis.

The questions we now face are simple. How can such a politicized TSK cope with fundamental change? Will the TSK revert to its previous status quo or become something else?

To answer these questions, we have to classify TSK generals in relation to institutional transformation:

It is also possible to classify TSK generals according to their political choice of right or left and their reading of global trends as nationalist and globalists:

From the TSK expulsions list we see most were Atlanticists and conservative officers. We also now detect that those who pretended to be Atlanticists in key units working on institutional transformation were actually Gulenists.

At the moment, the TSK is caught in the middle while crossing the stream of organizational transformation. Will it cross to the other side and continue with the transformation or go back and restore the status quo ante?

TSK Atlanticists have lost considerable power because of Gulenist influences and mass expulsions. Will President Recep Tayyip Erdogan, who now has more say in military affairs, become pro-transformation and opt for Euroasianist and neonationalist models that advocate a return to origins, to being more independent and Euroasianist externally, or will he focus on pragmatists and parasites to structure a new power balance in the TSK under strict civilian control? In other words, will the civilian-political authority call on Euroasianist reformists to lead the TSK’s transformation to defend the country against external threats? Or will the idea be to institute a power balance among the pragmatists, parasites and reformists in the TSK?

To learn the answers to these questions, we have to know whether Akar, the current chief, will remain in his post. If he departs, it would be a serious blow to Atlanticists. We seem to be heading in that direction. On the other hand, Erdogan appointed retired Brig. Gen. Adnan Tanriverdi of the Sadat A.S. private military company as his chief adviser on defense-security affairs. Tanriverdi is a key name in conservative traditions, and the appointment could well be an effort to balance the increasing power of Euroasianists in the TSK.