The Turkish military is polarized as to whether it should confront the alleged injustices perpetrated by the Gulenists against the army or if it should look to the future. 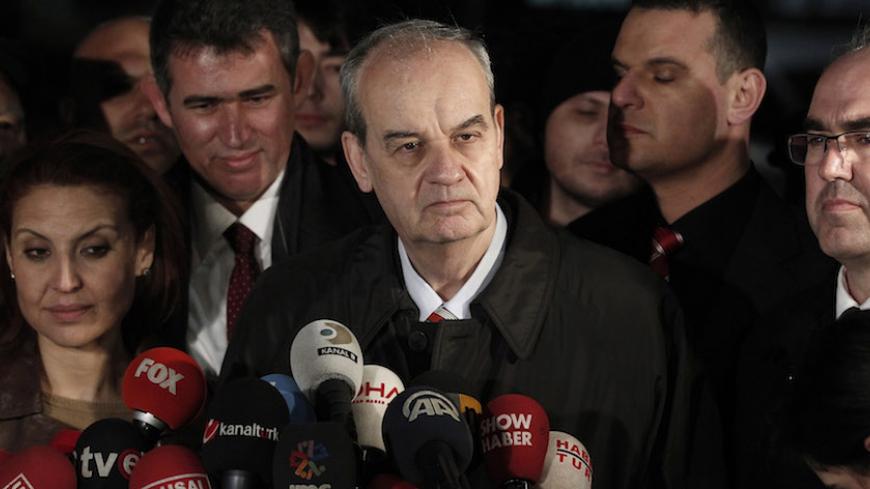 Those who are familiar with the Turkish military know it well, so recent media comments made by retired generals have placed hard-to-dismiss psychological pressures on serving officers. Now, once silent retired generals have resumed their oratory, this time regarding the so-called assassination plot against Deputy Prime Minister Bulent Arinc by an illegal structure that has allegedly penetrated the Turkish army.

Former Chief of General Staff Gen. Ilker Basbug and Lt. Gen. Ismail Hakki Pekin are among those who decided to speak out. Basbug was detained for over two years between 2008-2010 in the context of the Ergenekon coup attempt case. Pekin served as head of Military Intelligence under Basbug and was detained in 2011, also in connection with the Ergenekon case. Pekin is now the vice-chair of the radical leftist Homeland Party, which has distinguished itself with its neo-nationalist and anti-American narratives.

One wonders why Gen. Pekin, an experienced intelligence veteran, frequently appears in the media. Is this his reaction to the perceived injustices committed against him, or does he want to be seen as an active politician?

According to a senior retired officer who spoke to Al Monitor on condition of anonymity, both motives are valid. He said: "Pekin’s aim is to draw attention to the plots concocted by the parallel structure of the Gulenists [US-based preacher Fethullah Gulen’s movement] against the Turkish army and to injustices that arose from those plots. But he also has political goals. When the speaker is a newly retired intelligence officer and now vice-chair of a political party, obviously his search for justice is politicized."

The retired officer added: "I don’t think this is right. Past injustices against the Turkish Armed Forces (TSK) should be questioned with a transparent process without making it a subject for political expediency. If this process is politicized, those behind that injustice will remain unaffected. What the Turkish military now needs is legality, not politics."

To better understand the so-called assassination plot, a brief recollection is in order: The plot turned out to be totally false. The Gulen movement used this "plot" as the main pillar of its campaign to erode the Turkish army’s reputation. Now, the prevailing public perception is that the alleged assassination plot was a part of a scheme to control the army on behalf of the Gulen movement, which had deeply penetrated the police and the judiciary.

When it was claimed that two officers serving in the Mobilization Inspection Group — which, attached to the Turkish Special Forces Command, ensured civilian coordination with the army — were supposed to assassinate Arinc, Judge Kadir Kayan issued a court order to search the group's secret "cosmic room" and study its thousands of secret documents. This took place under Gen. Basbug's term as chief of general staff. Judge Kayan's findings were delivered to a specially authorized public prosecutor. Parts of this report were leaked to the press, while other parts disappeared during the trial process.

What were the contents of those documents? They detailed secret operational plans to mobilize relevant civilian officials to work with soldiers in and outside of Turkey, as well as their organizational chart and their current positions. The documents were certainly critically sensitive for Turkey. According to Gen. Pekin, who referred to an organic link between the Gulen movement and the United States, “The goal of the parallel body of the Gulenists was to learn the names of civilians who would be working with the army in case of a mobilization. If they could have gotten their hands on that, it would have been delivered to the US.”

Gen. Pekin also revealed that copies of these documents were handed over to the public prosecutor in March 2013, when the current chief of staff, Gen. Necdet Ozel, was already in command. Pekin said this was a monumental blunder and harshly criticized Gen. Ozel.

Gen. Basbug said that he did not hand over these documents to the public prosecutor during his term in command. He stressed that these documents were handed over to a civilian office during Gen. Ozel’s term in 2013.

A statement published on the chief of general staff's website explained why these documents were later handed over to the public prosecutor: "The reason for handing over on March 16, 2013 the images kept in custody of the chief of general staff to the public prosecutor was the legal imperative of obeying a court decision, [as well as] unwillingness to further prolong the investigation, which was casting aspersions on the TSK and its personnel, and the wish to eliminate the negative perceptions formed in the public opinion."

It thus became clear that the documents were handed over to the public prosecutor with the approval of Gen. Ozel.

The debate on the secrets of the “cosmic room” actually draws attention to a serious issue regarding the TSK. According to security experts approached by Al-Monitor, this debate is between the "absolutist hawks," which include some retired generals, and the "reformist doves," which are led by Gen. Ozel. The absolutist hawks have grouped around the Homeland Party and espouse a heavily politicized, anti-American, neo-nationalist and leftist ideology. This group demands the urgent settling of past accounts of injustices perpetrated on the TSK. It insists that the Gulenists who have penetrated the TSK be collectively and unsparingly punished and eliminated. Turkey’s unitary and secular structure has to be preserved at whatever cost and without concessions. The hawks aim to settle past accounts. They want the TSK to protect what has been achieved and then, perhaps, to look to the future.

Opposing the hawks are the reformist doves, led by Gen. Ozel and supported by Gen. Hulusi Akar, the current commander of Turkish Ground Forces who is slated to take over as chief of staff in August. This group believes that the TSK should look to the future without delay. They want the TSK to undergo a long-delayed structural transformation and to augment the TSK’s deterrence as a security element. This group, which seems to draw its lessons from the traumas experienced by the TSK as an institution, prioritizes the democratic process, civilian politics and supremacy of law. They want to obtain their rights through the legal system, not politics. They have a more rational approach to the Gulenists inside the TSK. Instead of a collective purge, they want the accused military personnel to be investigated within a strict legal approach. They want to spread the purge over a longer period of time, because they feel a one-time purge would mean a witch hunt in the TSK and hence new institutional trauma. They also feel that, given the latest developments in Iraq and Syria and the growing threat of the Islamic State, the TSK should prioritize increasing its power and effectiveness instead of settling past accounts.

It is not easy to predict how this struggle between the hawks and doves will end. The hawks' emphasis on settling past accounts appears more classically Turkish, while the doves’ emphasis on supremacy of law, democracy and reforms appears to be more appropriate for Turkey.