What Turkey can learn from coup plot case dismissal

The judgments rendered in the Ergenekon coup-attempt case have been dismissed after nine years because of errors in merit and procedure. 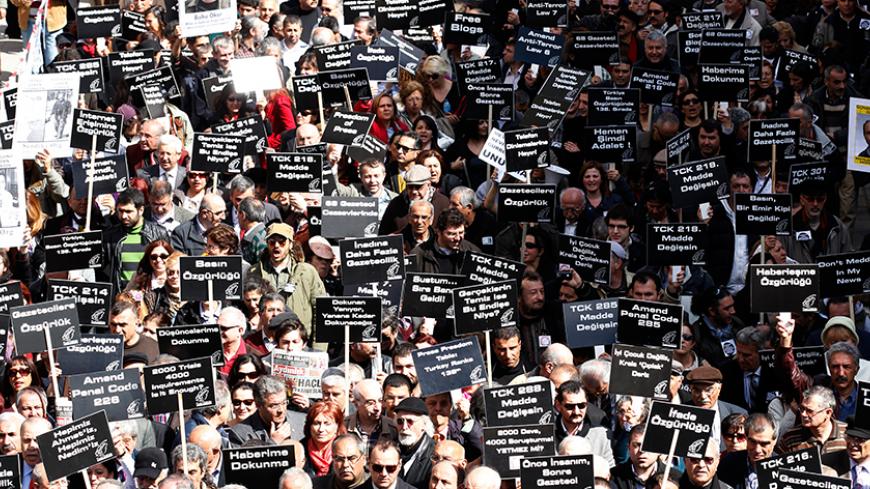 Journalists and activists participate in a rally calling for press freedom in central Ankara after the arrest and jailing of some 10 journalists as part of investigations into Ergenekon, an ultra-nationalist, secularist network opposed to Prime Minister Recep Tayyip Erdogan's rule, March 19, 2011. - REUTERS/Umit Bektas

The Ergenekon case, with 275 defendants, began in 2007 when hand grenades were found in a squatter house in Istanbul after an anonymous phone tip. Hundreds of civilians and military personnel were detained on charges that they were involved with an alleged terrorist group called Ergenekon that planned to topple the government.

The first hearing was Oct. 20, 2008, and eventually the trial became the largest of the past decade when 23 indictment sheets were consolidated into one. In the trial process, which lasted about 6½ years, 600 hearings were held. Eight defendants died during that time. Among them were three military officers who reportedly committed suicide because they couldn’t live with what they felt was the indignity of the trial process. Istanbul's 13th High Criminal Court rendered its verdict Aug. 5, 2013, sentencing many to life imprisonment and others to heavy imprisonment for 12 to 34 years.

Almost three years later, on April 21, the High Court of Appeals overturned the convictions because of procedural flaws and their lack of merit.

In its 231-page decision, the appeals court ruled that the Ergenekon case should have been split off from those about an attack against the Council of State in Ankara and the bombing of the Cumhuriyet newspaper, and the case against former Chief of General Staff Gen. Ilker Basbug. The court said there was unwarranted consolidation of cases, a prolonged trial process and unlawful searches of offices and homes, and said some evidence had even been fabricated.

Lt. Mehmet Ali Celebi had come to symbolize the case because he was the first serving officer to be detained and was imprisoned for 41 months. “From the outset, I knew I was facing a conspiracy," he told Al-Monitor. "The Ergenekon case was aimed at weakening the Ataturkist, modern, secular and anti-imperialist forces in Turkey. It caused major damage to the Turkish armed forces. … There were purges."

For Celebi, the biggest loser of this case was the rule of law. He said there is a lot of political responsibility that hasn't been discussed yet. “Our struggle will not cease until those legally and politically responsible for these fabricated cases, including the prosecutors and judges implicated, give an account of their actions.”

Retired Maj. Gen. Ahmet Yavuz, who was a defendant in the earlier Sledgehammer coup case, told Al-Monitor, "These cases, above all the Ergenekon file, sought to take over control of the TSK [Turkish Armed Forces] through anti-democratic means and then to transform the regime. But the power struggle between the Gulenists and political rule enabled us to see the discrepancies and flaws in these cases more clearly. This also enabled the nation to suspect these cases.”

According to Yavuz, with the appeals court's decision, the Ergenekon case is definitely closed. “This is a golden opportunity for legality to restore its standing. It is a significant decision that exonerates the judiciary and the Court of Appeals in the public conscience,” he added.

Retired Col. Ali Bilgin Varlik of the Ankara-based Central Strategy Institute said, “There is a common thread in all these cases of consolidating myriad unrelated [events and people], and trying them with irregular, flawed methods and fabricated evidence,” he said. Varlik believes that initially the political rule was galvanized in thinking that military tutelage was collapsing. But in time, when the fault lines and lapses began to emerge, a crisis of confidence took over the process.

He thinks these trials are good lessons for all segments of the society, in particular the political institution. Varlik added, “This is how the political rule became aware of the importance of the sensitive balance between the civilian control of the military and the security of the state. The weaknesses revealed by the trials and difficulties encountered showed to all of us that security is not a concept that can be implemented easily.”

How did this case affect Turkey’s institutions?

It is true that in the eight years from 2007 to 2015, Ergenekon and other court cases caused major concern in the TSK, but this concern did not become institutional trauma and weakness. With these cases, TSK personnel understood that supremacy of law is more important than absolute obedience to orders. Although Basbug, who was the chief of general staff from 2008 to 2010, did not handle the process wisely with his extremely stiff approach, most agree that his two predecessors, Gen. Isik Kosaner (2010-2011) and Gen. Necdet Ozel (2011-2015), handled the process deftly. These cases taught the TSK the importance of an independent civilian judiciary and democracy. During the detention and imprisonment process, not a single retired or serving official attempted to escape or defy the judicial process, but continued to express confidence in democracy and the supremacy of law, thus displaying clearly the military’s confidence in law and democracy.

One of the major losers of the Ergenekon case is no doubt the media. Turkish media, with its excessively politicized approach throughout the trial process, gave striking examples that it can deviate from appropriate, ethical and impartial reporting.

No doubt the biggest loser in the Ergenekon case is the Gulenist movement. The case showed that the Gulenist movement, instead of acting as a civil society organization, penetrated the state organs with its so-called "parallel structure" and manipulated, in a Machiavellian manner, the state organs and judiciary to achieve political power. The Gulenist movement did not offer an iota of self-criticism of the rights violations during the Ergenekon process. Of course, Ergenekon and other cases had negatively affected the TSK's national prestige. But the army’s reputation is again on the rise because of its combat against the Kurdistan Workers Party and the Islamic State, and the measures it has taken to improve border security and handle developments in Syria.

Now the critical question to ask is whether the Turkish army will use this resurging prestige to strengthen democracy and the judicial system in Turkey, or use it to accumulate power for a possible intervention in civilian politics.

A new critical process awaits the military in Turkey. Ergenekon and similar cases have proven that the TSK has successfully passed its test of respecting the law. We will now have to wait and see how it will perform in preserving and reinforcing pluralist democracy in the coming days.