Is the military the Achilles’ heel of the Turkish government?

After years of arrest and imprisonment, released officers of the Turkish Armed Forces seek justice and raise red flags about the future of the military. 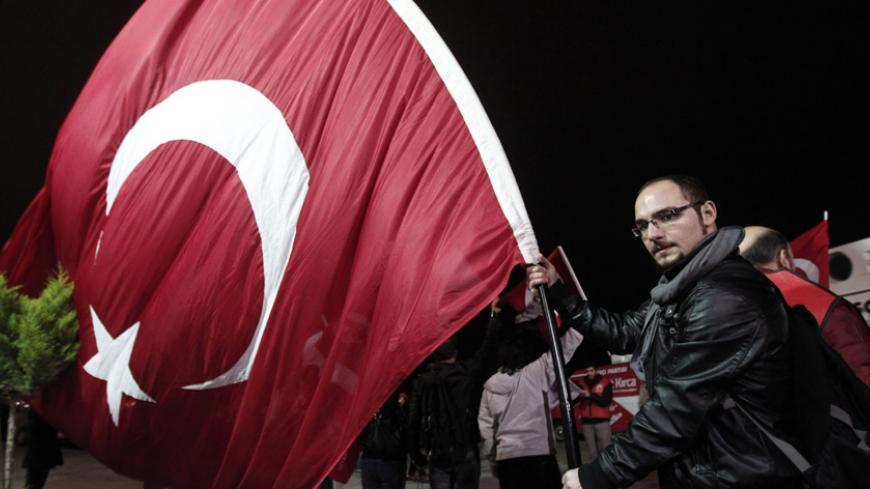 A pro-secular demonstrator holds a Turkish flag as he waits for the release of former army chief Ilker Basbug outside the Silivri prison complex near Istanbul, March 7, 2014. - REUTERS/Osman Orsal

The Turkish Supreme Court began the appeals process for the notorious Ergenekon case Oct. 6. Ilker Basbug, Turkey’s former chief of staff, appeared before the court with a three-hour defense. In August 2013, Basbug was convicted for plotting a military coup against the government and for establishing and leading a clandestine organization called Ergenekon. Basbug was sentenced to life in prison along with dozens of other high-ranking and junior soldiers, journalists and academics.

The Turkish Armed Forces (TSK) was labeled as the center of the Ergenekon deep-state organization. Ergenekon was one of 11 notorious court cases where hundreds of TSK members were the main suspects, charged with treason, military espionage, conspiracy to overthrow the government and terrorism. Since late 2013, these court decisions have been reversed and hundreds of convicted officers, journalists and academics were released.

On Oct. 7, Basbug’s appeal drew the headline “General submitting a defense, but goes on offense.” Since the court cases started, a growing body of evidence has been produced by the formerly accused personnel’s firsthand accounts of their experiences and perceptions of why the TSK was targeted. Basbug’s lengthy speech reiterated how the plot against the TSK was hatched. Basbug said, “The armed forces were an obstacle for those who have been uneasy over the nation-state, a unitary and secular state, who want to implement moderate Islam ... and who want a political solution to the PKK [Kurdistan Workers Party].”

Basbug repeated a perception shared with many others in the TSK that the Bush administration had blamed the TSK when the Turkish parliament, on March 1, 2003, refused to allow US-led coalition forces to go through Turkey into Iraq; the vote took place just weeks before the invasion of Saddam Hussein's Iraq began. Basburg said he thought the Bush administration and neo-cons supported efforts to weaken the TSK.

Basbug also bluntly declared the Gulen Movement as the perpetrator of the plot against the TSK, with the close cooperation of the Justice and Development Party (AKP) government.

Yet, the crux of Basbug’s argument was based on what an appeals court should do: name the people who signed the decisions and the judges, prosecutors and police who produced false evidence to back the allegations against hundreds of suspects since 2007.

Just being released from prison is not enough for the wrongly accused soldiers. They, along with their families, suffered significant losses. Retired Col. Erhan Guler told Al-Monitor, “The TSK was caught unprepared for these allegations, court cases and worse, for the arrest and imprisonment of hundreds of active duty and retired officers. The allegations generated distrust within the armed forces. Even best friends started suspecting each other, and those charged were initially ostracized along with their families. Fear of guilt by association endured. I believe this was the worst damage to the TSK’s morale and solidarity.”

Al-Monitor interviewed more than 15 soldiers who had been falsely charged in Sledgehammer, Ergenekon and military espionage cases. All of them were prosecuted and incarcerated. Recently released, they were all forced to retire from the TSK prematurely. Lt. Col. Mustafa Onsel, who has written a courageous book titled “Ambush of the Hyenas at Besiktas [an Istanbul district where Onsel was arrested],” was happy to go on the record with his statements. Onsel had served over a decade in combat zones of eastern and southeastern Turkey as a gendarmerie commander. Then he was, in his own words, convicted as a terrorist. He was imprisoned for four years. He is now free, as the charges against him were proven false. Onsel called the so-called court set up against the TSK as worse than “Inquisition courts.” He told Al-Monitor, “We were asked to prove our innocence and we did. But then they simply said, 'Well, it really doesn’t matter after all.'”

One general, who asked not to be named, likened it to being ticketed in absentia for a nonexistent traffic infraction: “One day, you receive a traffic ticket for going through a red light. There is no name of the officer who issued the ticket. You realize you were not in town that day, so you prove your absence with hotel receipts and witnesses from another city from that day. They tell you, ‘A patriot police officer issued this ticket, so trust the courts and pay the fine; then you can appeal the charges.’ You pay the ticket and then are arrested for your appeal that points out ‘There are no traffic lights on the street where I was accused of going through a red light.’ This is what the court cases have been like for us. This was what Gen. Basbug meant when he said, 'We [TSK members] felt like we were members of a foreign army on trial.'”

All the TSK members Al-Monitor spoke with were quite understanding and forgiving toward the Turkish public, which remained rather quiet while top echelons of its army were being arrested. It should be remembered that the Turkish military, despite its involvement in politics and consecutive coups d’etat, was the most popular and respected institution in the country for decades. While a Pew Research Center study shows a degree of loss of influence over time, still no other institution ranks higher than the TSK.

Officers who spoke with Al-Monitor agreed that previous events have primed public suspicion that the TSK could be plotting another coup. Onsel said, “About 80-85% of the public was convinced that the TSK could be bombing its own country’s mosques. I believe the TSK’s reputation was significantly tarnished between 2007 and 2011.”

So can the tarnished reputation of the TSK be restored? Retired Col. Ilkay Sezer, who is also the attorney representing Basbug, told Al-Monitor, “We must all learn from these court cases to prevent the repetition of such injustice ever again. The allegations were mind-boggling and the proposed evidence was unfounded. These so-called court cases hurt not only the TSK, but also the Turkish legal system. I don’t know of another armed forces that has gone through a similar experience. I hope those who fabricated these concocted allegations and those judges who simply ignored our repeated pleas to consider the records, documents and testimony proving the facts should be brought to account.”

Officers also believe the high number of military losses incurred in conflicts with Kurds since the June 7 elections are directly related to these concocted court cases. Onsel, who was forced into retirement, asked, “Who has taken our places while we were in prison? While the AKP government constantly talks about the dangers of the parallel state in the police and judiciary, what about the military? With whom can they replace a whole generation of junior officers and lieutenant colonels?”

Onsel said that members and sympathizers of the Gulen Movement are in critical TSK positions such as those of medical doctors, teachers and administrators. Also, many former officers believe the Gulenists' numbers are quite high, particularly for younger cadets in ranks below lieutenant colonel. If the younger generations, the backbone of the TSK, are predominantly members of the Gulen Movement, why has the AKP preferred to keep quiet about this? The Turkish public constantly hears of the Gulen Movement's infiltration into the judiciary and the police, but not into the TSK.

If these former soldiers’ fears are credible, this may just be the AKP’s Achilles’ heel. If the Gulen Movement is so dangerous for Turkey and has such control over younger generations of the TSK, how will the AKP survive?