Turkey's military council made some surprise decisions this week that provide insight into the president's re-election strategy. 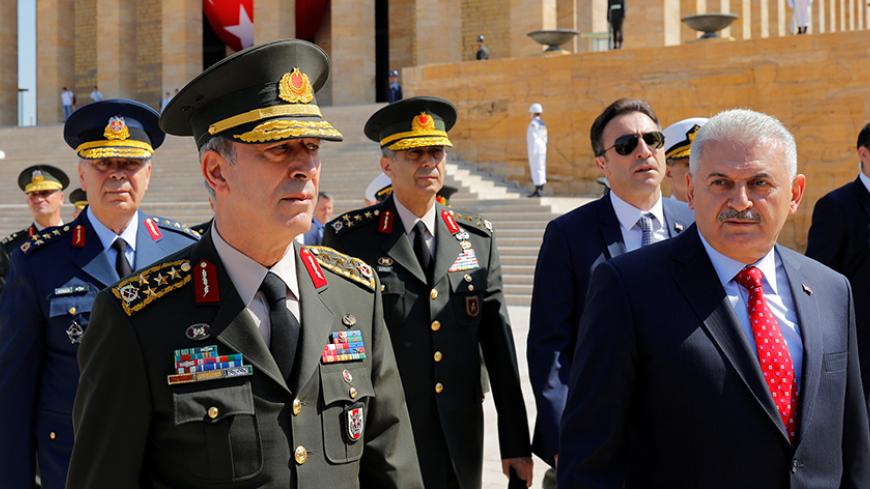 Yesterday, Al-Monitor colleague Amberin Zaman summarized the results of the Supreme Military Council's (SMC) critical decisions on promotions of generals in the Turkish Armed Forces (TSK). Today we will examine how these decisions might be interpreted.

First, the SMC met Aug. 2 under Prime Minister Binali Yildirim in a reconfigured format of four military and eight civilian officials. This means that civilians hold the council majority for the first time. Naturally, this also means that from now on, President Recep Tayyip Erdogan — and not the military — will have the final say in SMC decisions.

In mid-July, the feeling in Ankara was that Chief of General Staff Gen. Hulusi Akar would be retired along with commanders of the army, navy and air force.

In my June 14 article, I had noted that despite the flurry of media criticism of Akar, Erdogan had not expressed support for him and it looked like he would be retired unless he was able to bargain with Erdogan. Akar was one of four branch commanders detained by putschists during the July 15, 2016, coup attempt. They all could have stayed on in their positions, but three were retired: Only Akar retained his post. This indicates he did indeed negotiate a favorable outcome through strategic bargaining.

According to the SMC decisions, current Gendarmerie Cmdr. Yasar Guler will lead the army, Gen. Hasan Kucukakyuz will take over the air force and Adm. Adnan Ozbal will command the navy.

Therefore, it's likely Akar will retain his post until August 2019. Unless there are major surprises, the current configuration also means Guler, a close associate of Akar, will become chief of general staff for the 2019-2023 term. Guler gets along well with members of Erdogan's Justice and Development Party and is known for his hard-line performance against the Kurdistan Workers Party (PKK), which Turkey considers a terrorist group, and the Gulen movement, which Erdogan blames for the coup attempt.

The first signal of these changes came July 19 when Defense Minister Fikri Isik was named to be a deputy prime minister and Nurettin Canikli, who has an economics background and a strong vision for the Turkish defense industry, was appointed defense minister.

It was no secret there were sharp differences of opinion between Isik and Akar, particularly over the military education system and the institutional transformation of the Turkish Armed Forces (TSK). The TSK changes placed branch commanders under the minister of defense instead of the chief of general staff, and the chief of general staff position was attached to the presidency. With Isik's departure, the Ministry of Defense lost some of its strength against the chief of general staff. That's why it's not far-fetched to claim that Akar’s standing and influence have been boosted in the TSK, the Defense Ministry and the government, given the support he has received from Erdogan.

Also attracting attention was a four-hour meeting Erdogan had with Prime Minister Binali Yildirim and a 2½-hour meeting with Akar a day before the SMC announced its ruling. Most of the SMC decisions were obviously made in those meetings, and that is how the SMC completed its work in four hours, whereas it used to take three days.

Why did Erdogan extend Akar’s term of duty? What could Akar have offered him?

We have to acknowledge that since the coup attempt, power plays within the TSK and also between the TSK and civilian actors have continued. Within the TSK, relations over political affiliations, stances over civilian-military relations and attitudes toward military transformation remain unstable. Erdogan is mindful of presidential elections, which are due at the latest in 2019. To retire Akar now could have had disruptive, chaotic effects on these relations. A new debate about Akar's successor and the fallout from the failed coup — complete with more mass trials and continuing purges — could have triggered political polemics affecting Erdogan’s re-election aspirations. This is most likely one reason Erdogan chose to keep Akar rather than work with an unknown entity.

Another reason is Akar's successful performance in the struggle against the PKK and the Gulenists, which is the SMC's primary criterion for major promotions and appointments.

Last year, close to 4,000 military officers, including 196 generals, were discharged for their alleged links with the Gulenist movement and the military uprising. All field developments indicate that Turkey’s struggle with the PKK, and against the PKK-affiliated Kurdish People’s Protection Units (YPG) in Syria, will continue unabated in 2018 — hence Erdogan’s need for Akar.

During the crisis days after the failed coup, Akar positioned himself close to Erdogan and skillfully managed the power struggle in the TSK and pertinent political arguments without much damage. Also, the personal confidence between Akar and Guler, who is expected to replace him in 2019, is a buffer protecting Erdogan against a new crisis with the TSK. In short, until 2023, Erdogan should have smooth sailing without any disruption from the TSK, and he will work on reformatting civilian-military relations and the country's security structure.

The navy was the epicenter of the earthquake that followed the SMC decision. After the navy's commander, Fleet Adm. Bulent Bostanoglu, was retired, per tradition it was expected that the No. 2 ranking officer, Adm. Veysel Kosele, would assume the top spot. Ozbal, who was fifth in the navy’s seniority rankings, bypassed four more-senior admirals, which came as a major shock and is likely to cause grumblings. Ozbal’s promotion no doubt dilutes the institutional strength of the navy compared with the army and air force. It also ensures Akar's control over the navy will be more pronounced.

This is yet another indicator that the TSK’s priority in 2018-2019 will continue to be combating the PKK and the Gulenists. Among the colonels the SMC promoted to brigadier generals are many who were sidelined for a time by false legal cases concocted to make it easier to prosecute Gulenist officers. Also promoted to brigadier rank were some special forces members and commando officers, although they were not academically trained staff officers.

An unusual number of colonels, lieutenant generals and major generals had their terms extended even though they were qualified for retirement. Purges after the failed coup created a significant vacuum between the number of four-star and one-star generals, which could affect the TSK's combat effectiveness.

In sum, definitely until August 2018 and most likely until August 2019, we will be discussing civilian-military relations not on their institutional aspects but on personal harmony between Erdogan and Akar. This may well be the wisest approach to current and future crises, albeit one that could possibly cause the Defense Ministry to lose some power. However, personalizing decisions could also hamper institutional transformation and military reforms — as well as democratization, transparency and accountability in civilian-military relations.